The council members said the proposed resolution came after conversations since the vote in June that eased homeless camping laws in Austin. 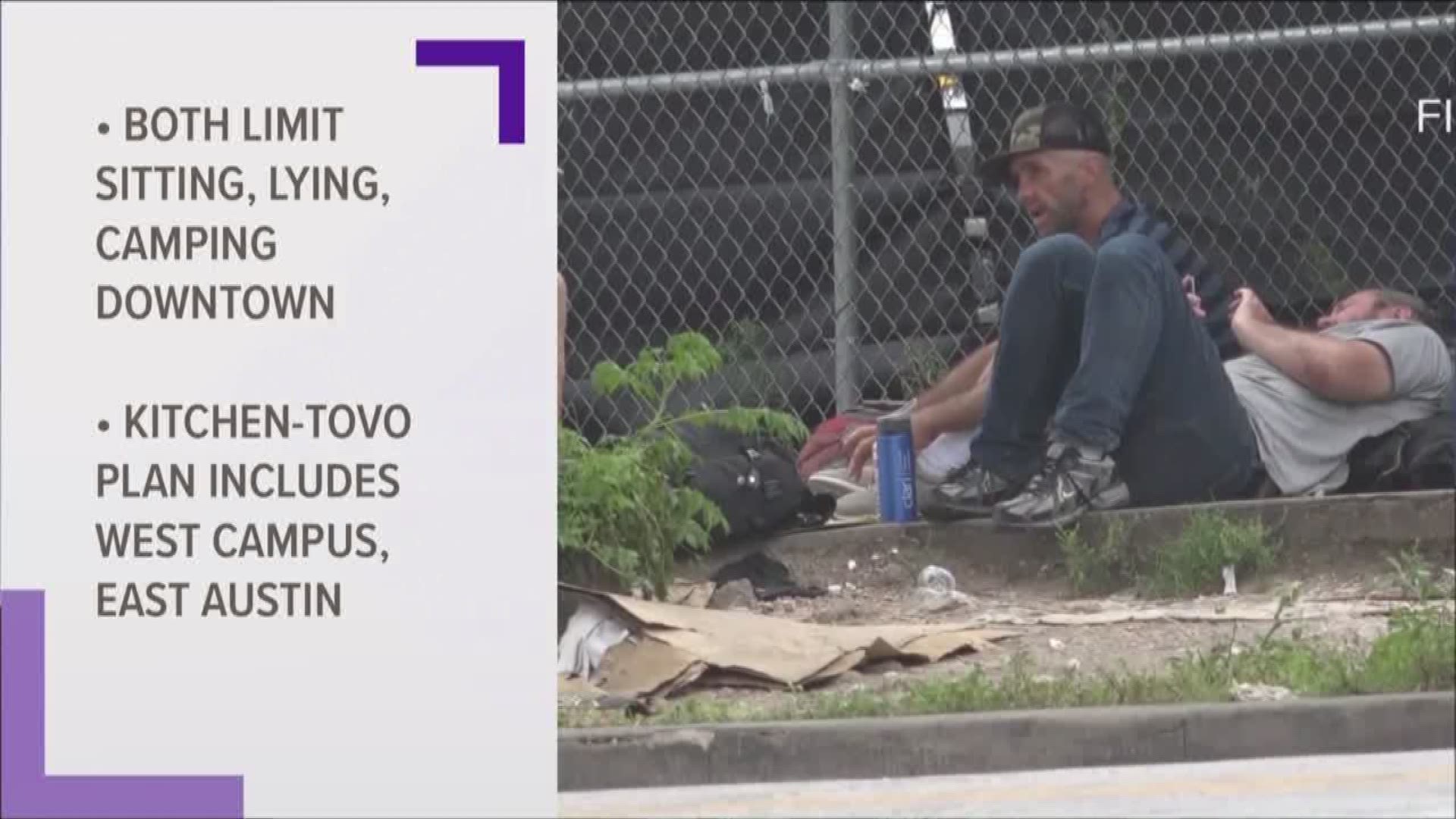 AUSTIN, Texas — Austin City Council members Ann Kitchen and Kathie Tovo have proposed amendments to the city’s camping, sit and lie ordinances that would ban homeless camping in West Campus and a large portion of downtown.

Later on Tuesday, Mayor Steve Adler and council member Greg Casar proposed an alternate plan, which, under Adler's portion, would ban camping in downtown areas where cycling on sidewalks is prohibited, according to a 2010 city map.

Kitchen and Tovo did not rely on the city map because they believe it's outdated.

Casar's portion would instead clarify that sitting, lying or camping is banned when sidewalks are blocked by not maintaining a 4-foot clearance.

In a post to the City of Austin Council Message Board on Tuesday, Kitchen and Tovo said their proposed resolution came after conversations since the vote in June that eased homeless camping laws in Austin.

"The linked resolution and ordinance reflects those conversations with our colleagues Mayor Adler and council member Casar and, in some cases, even includes elements and actual language they brought forward," Kitchen and Tovo said. "While the four of us agreed on many – perhaps even most – provisions, we are not in complete alignment about each one and have agreed to bring forward separate proposals for our full council to consider at the special called meeting."

In a post to the same message board on Tuesday, Adler said his preferred ordinance diverged from what Kitchen and Tovo proposed.

Even within the Adler-Casar proposal, there are different options offered between the mayor and Casar.

Under Adler proposal, there would be bans on:

RELATED: 'It is just what we said we were going to do': Mayor Adler calls for more restrictions with homeless camping

Casar said he was opposed to going backwards on the changes to the homeless ordinances, saying he "cannot support a final ordinance unless it is non-discriminatory and won't re-criminalize basic acts of survival by our neighbors experiencing homelessness."

Council Member Kitchen told KVUE the main goal of her joint plan with Tovo is to ensure safety for everyone.

"Saying that it is OK to camp or sit and lie in areas that are not safe is not good for anyone, and I don't consider that discriminatory," she said.

The Kitchen-Tovo ordinance would also ban camping "on the sloped area under a highway and at the top of a retaining wall under or alongside a highway overpass."

But the Adler-Casar proposal would only propose those bans "where the slope is unsafe."

Kitchen-Tovo's proposal says underpasses with large flat areas are generally safe and not subject to the ban.

Adler told KVUE the proposed changes to the homelessness ordinances aren't reversing the changes the council voted on in June. Instead, they're setting out to do exactly what they said they would do.

"We said in June no one should camp, sit or lie where it's not safe, where there's a public health hazard, and now we're fleshing that out, to better identify where the risks and hazards are found," he said.

More than 100 people showed up. Many of them had questions, but others just wanted to vent about the controversial issue.

Adler said at the forum he saw limiting camping in certain areas of the city as a path forward toward his goal of eliminating homelessness. He passed out his proposal to forum attendees.

One issue that people asked about was panhandling. Adler explained the City rolled back that ordinance because the City legally can't patrol speech.

The city council will consider these new proposals later this month.