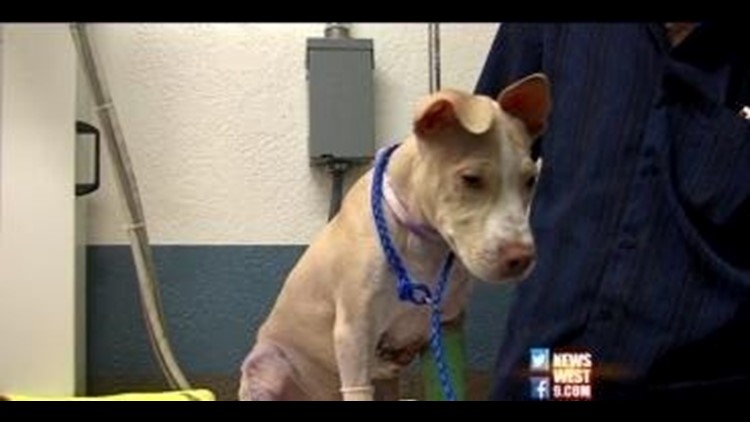 A young pit bull is recovering after being thrown from a moving car down a highway. The Odessa woman who stepped in to help take care of her says she's can't imagine why anyone would do such a cruel thing.
Author:
Published: 3:21 AM CDT September 8, 2014
Updated: 4:45 AM CDT July 10, 2018
By Iline Tang
NewsWest 9

ODESSA – A young pit bull is recovering after being thrown from a moving car down a highway. The Odessa woman who stepped in to help take care of her says she's can't imagine why anyone would do such a cruel thing.

"The poor dog was suffering in pain. When I seen her, she wasn't able to walk because of the amount of pain that she was in," Odessa Resident, Eleanor Roe, said.

It all started in the early hours of Friday morning last week, Eleanor Roe's friend was on his way to Odessa from Midland, driving on Highway 191, when he saw something unusual from the car in front of him.

"He seen two arms come out and an object fly out the window. They're going 70 plus miles an hour," Roe said.

What he saw might surprise you. A pit bull, about three to four months old, was thrown from the moving car. He took her home and patched the pup up but gave her to Eleanor because he couldn't care for her financially.

"She needs somebody to take care of her because apparently whoever did this to her didn't care enough to even keep her around or try to find another home for her," Roe said.

After taking her in, Eleanor named the young pit bull, Angel 191. She took the pup to Angel's Vet Clinic in Odessa to get her treated. Luckily, Veterinarian Becky Battershell said Angel 191 is expected to be okay and her injuries are somewhat like road rash.

"It doesn't appear that she has any broken bones at all. What she has is a lot of soft tissue injury to her skin and to like, the pads of her feet," Battershell said.

Angel will have to undergo six surgeries to decrease the amount of scar tissue that she has. So far, she has had two.

"After a procedure, she gets pretty painful for a couple of days but we're able to manage that with pain medication and of course. She's on antibiotics for secondary infections and things like that," Battershell said.

As for the bad guys that threw Angel out of the car, they're nowhere to be found. Eleanor says her friend wasn't able to get a description of the car or the license plate number. Right now, she isn't sure whether or not she's going to keep Angel or give her up for adoption.

"Over the last few days, we have grown attached and granted, it's only been a week, but you know, it's a lot of time and effort to ensure that she's well," Roe said.

But one thing's for sure.

"Hopefully as a community, we can pull together and try to help her and any other dogs that might come along later down the line," Roe said.