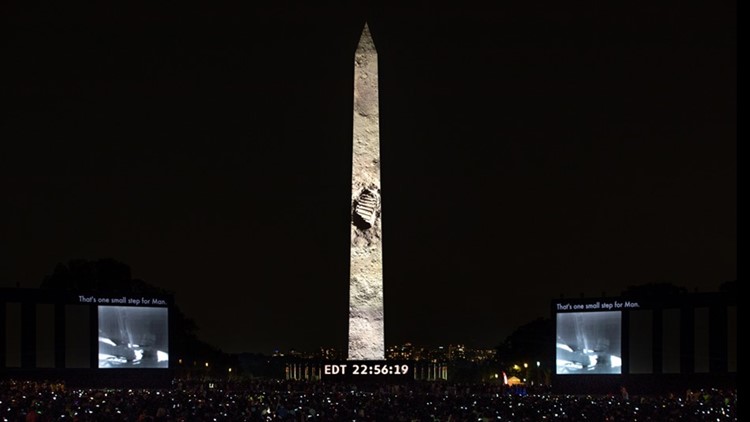 Photo by: 59 Productions, the creators of the Go For the Moon show
The first footprint on the moon is projected onto the Washington Monument in honor of 50 years since the Apollo 11 mission.

WASHINGTON — The National Air and Space Museum released a beautiful video Friday night, showcasing the celebration of the first lunar landing that was projected onto the Washington Monument this summer.

Despite the extreme heat, at least half a million people turned out to watch the “Apollo 50: Go for the Moon” show - projected onto the Washington Monument - in honor of the 50th anniversary of Apollo 11’s lunar landing.

The 17 minute show played a total of six times and had an estimated half a million people turn out to see it. The National Air and Space Museum, with the help of 59 Productions, projected the 363-foot rocket onto the Washington Monument, with several screens to the side of the obelisk.

COURTESY: Apollo 50: Go for the Moon was commissioned by the Smithsonian’s National Air and Space Museum and produced by 59 Productions. The Museum’s Apollo 50 programs were made possible by the support of Boeing with additional support from Raytheon.

RELATED: At least half a million people watched Apollo 11 moon landing on the Washington Monument

Alison Mitchell, from the National Air and Space Museum, said the event management company took crowd density reports on the grass panels across the National Mall and made the 500,000 estimate.