The same military jurors who acquitted Navy SEAL Chief Eddie of murder reduced Gallagher's rank and he must also forfeit $2,697 per month for two months. 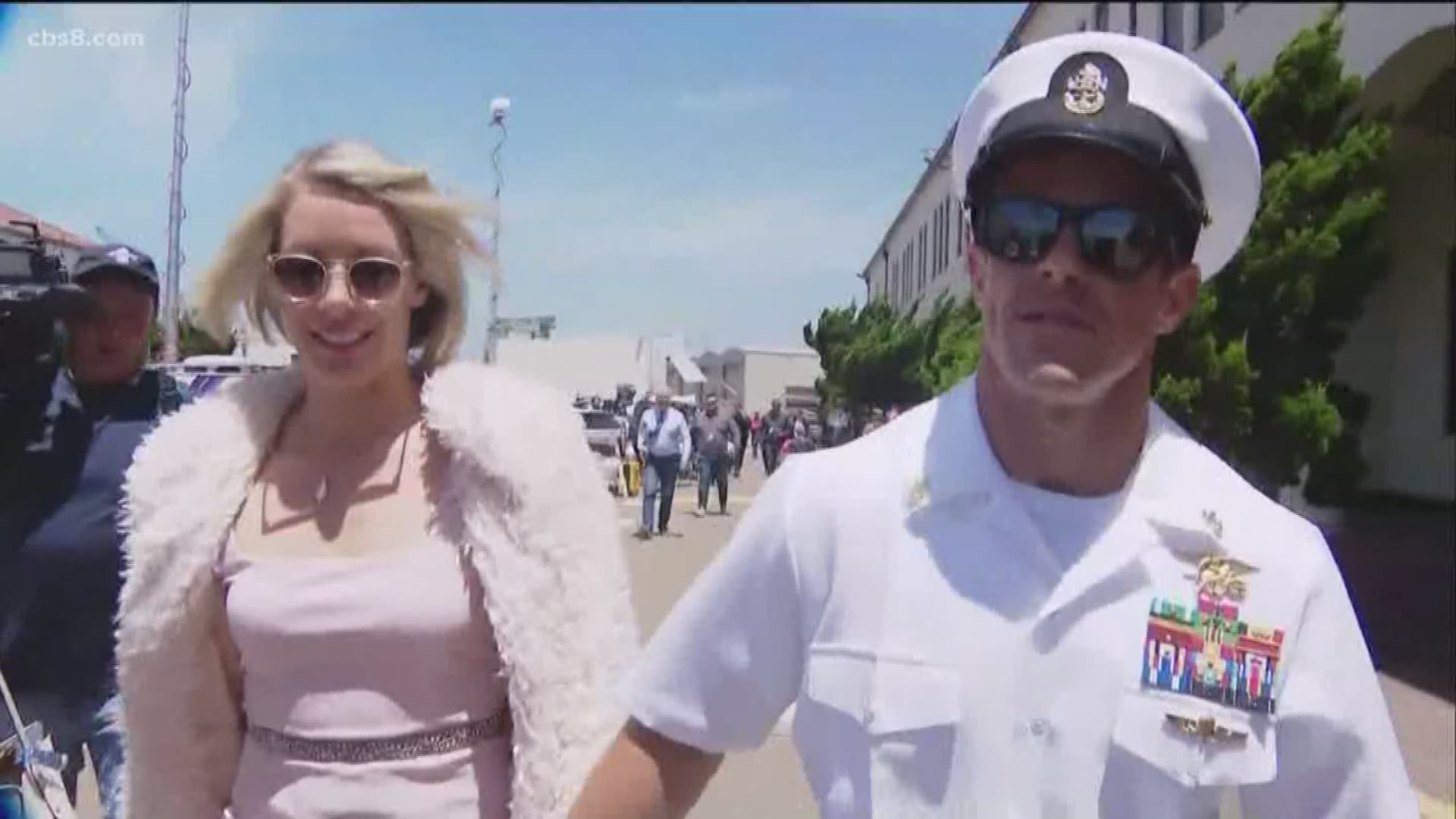 SAN DIEGO — The same military jurors who acquitted a decorated Navy SEAL of murder in the killing of a wounded Islamic State captive under his care in Iraq in 2017 returned to court Wednesday to decide Chief Eddie Gallagher’s sentencing. The jury reduced his rank from E7 to E6 and sentenced him to a maximum four-month confinement. However, Gallagher won't serve confinement, because of a credit of time served. Gallagher must also forfeit $2,697 per month for two months.

As Gallagher was leaving the courthouse with his wife Wednesday following the jury’s decision, News 8 asked him how he felt about it.

“I feel fine. It’s alright, you know, the jury came to the verdict and I trust them,” he said.

His defense lawyers also spoke to the media outside the courthouse following the decision.

“He does not have to come back into a courtroom. He can go home and be with his family,” his attorney said. 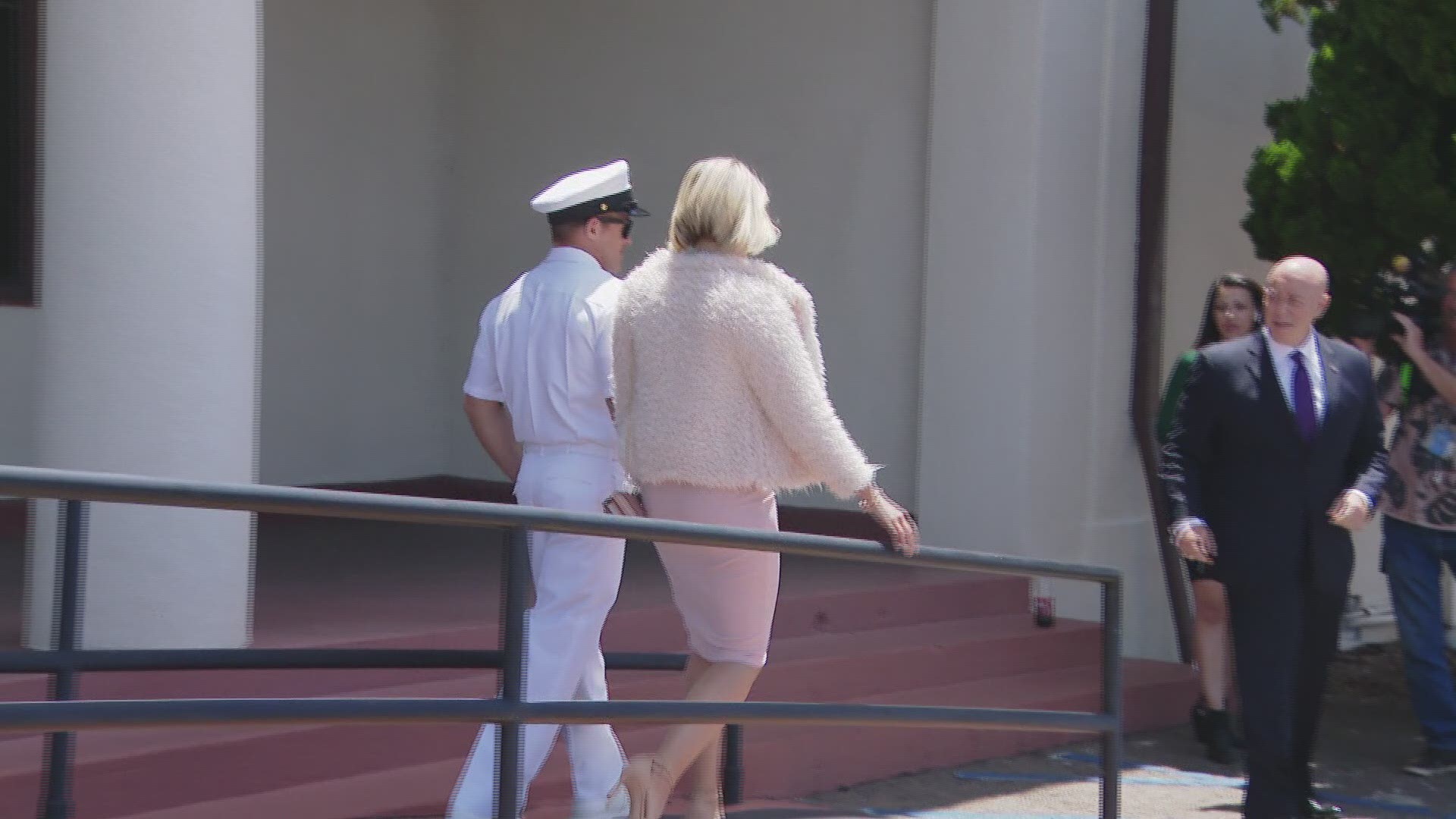 The final step comes after the verdict Tuesday was met with an outpouring of emotion as the jury also cleared Special Operations Chief Edward Gallagher of attempted murder in the shootings of two civilians and all other charges.

The outcome dealt a major blow to one of the Navy's most high-profile war crimes cases and exposed a generational conflict within the ranks of the elite special operations forces.

RELATED: Navy SEAL acquitted of murder in killing of captive in Iraq

After the verdict was read, the defense attorneys jumped up from their seats as Gallagher turned and embraced his wife over the bar of the gallery.

Gallagher, dressed in his Navy whites sporting a chest full of medals, told reporters outside court that he was happy and thankful.

"I thank God, and my legal team and my wife," he said.

He declined to address questions about his SEAL team.

His wife, Andrea Gallagher, who was by his side throughout the court-martial, said she was elated.

"I was feeling like we're finally vindicated after being terrorized by the government that my husband fought for for 20 years," Andrea Gallagher said before the couple drove away from Naval Base San Diego in a white convertible Mustang to start celebrating.

RELATED: Edward Gallagher trial: Prosecutor tells jury to use SEAL's own words to convict him

She vowed to continue to take action over what she has described as prosecutorial misconduct and a shoddy investigation that led to her husband going to trial. She said she wants Naval Special Warfare Group 1 Commodore Capt. Matthew D. Rosenbloom to resign, among other things.

Defense lawyers said Gallagher was framed by junior disgruntled platoon members who fabricated the allegations to oust their chief and the lead investigator built the probe around their stories instead of seeking the truth. They said there was no physical evidence to support the allegations because no corpse was ever recovered and examined by a pathologist.

The prosecution said Gallagher was incriminated by his own text messages and photos, including one of him holding the dead militant up by the hair and clutching a knife in his other hand.

"Got him with my hunting knife," Gallagher wrote in a text with the photo.

The defense said it was just gallows humor and pointed out that almost all platoon members who testified against him also posed with the corpse.

Gallagher's family championed a "Free Eddie" campaign that won the support of dozens of congressional Republicans who brought the case to the attention of President Donald Trump.

Trump had Gallagher moved from the brig to more favorable confinement at a Navy hospital this spring and was reportedly considering a pardon for him.

Embattled Rep. Duncan Hunter, R-Alpine, also advocated pardoning Gallagher and stated publicly that he also posed with an enemy combatant's corpse during his time in the Marines.

Hunter, who is facing federal charges of misusing campaign funds, celebrated the acquittals and reproached the Navy in a statement released Tuesday afternoon.

"The Gallagher case has been shameful from the start," according to Hunter, who said the trial was "nothing short of a disgrace for the entire military system."

"On very circumstantial and limited physical evidence, the Navy felt it appropriate to charge Chief Gallagher with the murder of an ISIS terrorist, accomplishing nothing but destroying the military career of a decorated Navy SEAL and giving every warfighter cause for concern that the nation they serve does not have their back," he said.

The jury panel of five Marines and two sailors, including a SEAL, were mostly seasoned combat veterans who served in Iraq and several had lost friends in war.

Most of the witnesses were granted immunity to protect them from being prosecuted for acts they described on the stand.

Lt. Jacob Portier, the officer in charge of the platoon, has been charged separately for overseeing Gallagher's re-enlistment ceremony next to the corpse and not reporting the alleged stabbing.

Statement from the Gallagher family:

"This week, the jury restored Chief Edward R. Gallagher’s freedom and found him not guilty of murder. After being taken into pre-trial confinement on September 11, 2018 he will spend this July 4th with his family celebrating not only our nation’s freedom, but also his own. Although this trial has exposed many concerning shortcomings within the military justice system, the service members who served on the jury fulfilled their constitutional duties and ensured that nothing less than justice was done. SOC Gallagher, today apologized to the members of the jury and took full responsibility not only for the photo at issue, but also for the scrutiny it has brought to the military community and family he loves. Although we are thankful for yesterday’s verdict and to the service members who served on the jury, we will continue to fight on SOC Gallagher’s behalf toprotect the full retirement benefits he earned over the duration of his 20 years of service. On behalf of the entire legal team as well as the Gallagher family we are thankful for the continued support we have received."