The Chicks, formerly The Dixie Chicks, are stepping into a new chapter with new music for the first time in 14 years. 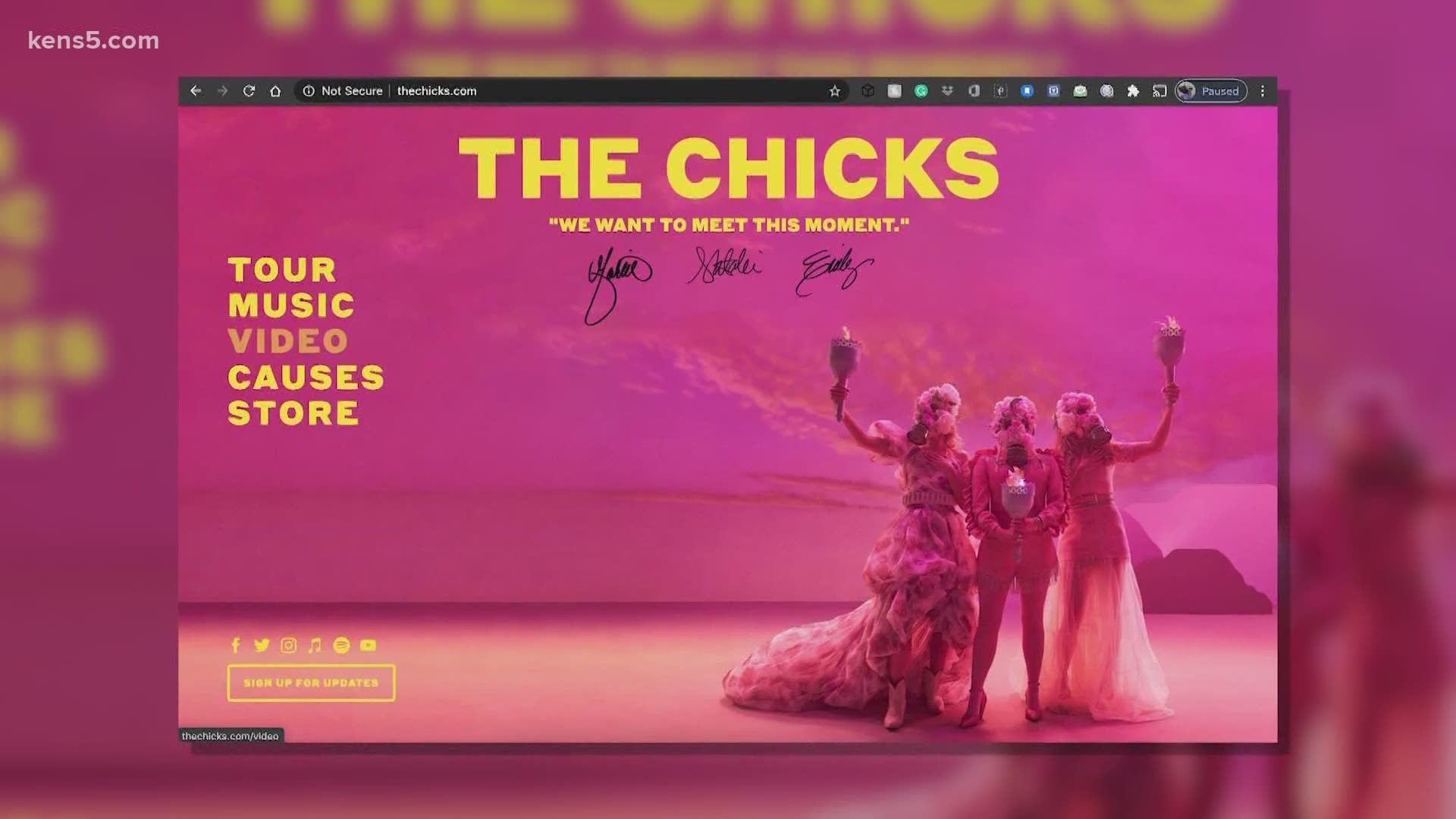 NASHVILLE, Tenn — The Dixie Chicks are no more. Breaking their ties to the South, The Chicks are stepping into a new chapter in their storied career with their first new music in 14 years.

The Texas trio of Emily Strayer, Martie Maguire and Natalie Maines have been teasing new music for a year, and “Gaslighter” finally drops on July 17 when the nation is embroiled in divisive politics, cancel culture and reckoning with inequality. The timing is right for their voices to be heard again.

“It just seemed like a good reflection on our times,” said Maines. “In 20 years, we’ll look back at that album cover and title and remember exactly what was going on in the country right then.”

“Gaslighter” is a slang term, inspired by a 1944 Ingrid Bergman film, to describe a psychological abuser who manipulates the truth to make a person feel crazy. In recent years, it’s been used to describe powerful men like Harvey Weinstein or Donald Trump.

RELATED: What the word 'dixie' means and why it's offensive

RELATED: The Dixie Chicks change name to 'The Chicks'

“I think most everybody has a gaslighter in their lives somewhere,” said Strayer. “But, yeah, it was so weird how it echoes our current administration.”

As the best-selling female group in RIAA history, The Chicks appealed to generation of country fans that saw themselves in the band’s stories, whether it was “Wide Open Spaces” or “Cowboy Take Me Away.” After three independent albums, their first major label record in 1998 sold 13 million copies in the U.S. alone.

With Maguire on fiddle and Strayer on banjo, they were all steeped in bluegrass and classic country, but relished in fun country-pop on crossover songs like “Goodbye Earl.” They were country music’s next big thing until suddenly the door was slammed on them.

In 2003, as then-President George Bush was preparing to invade Iraq, the trio were playing a show in London when Maines announced they were ashamed that the president was from Texas.

Credit: AP
FILE - In this May 26, 2006, file photo, Dixie Chicks, from left, Emily Robison, Natalie Maines and Martie Maguire, wave to the crowd as they perform on ABC's "Good Morning America" summer concert series in Bryant Park, in New York.

The fallout became country music lore, a warning to stay away from political talk, especially of the liberal kind. They were booed on awards shows, radio stations pulled their music off the air and fans destroyed their CDs. Maguire only recently showed her daughters the 2006 documentary called “Shut Up and Sing” that showed how the backlash affected them behind the scenes.

“I was putting off showing them because I have one that’s 11 and I just thought she was a little young,” Maguire said. “I thought she might be upset by just the death threat stuff.”

Instead, her daughters, living in a social media generation when everyone is afforded an opinion, were confused by the reaction to Maines’ tame comments compared to the vitriolic criticism lobbed by politicians and pundits every day.

The trio are all now parents of teenagers when youth activists are taking the lead on gun control, climate change and racial inequality. Their song “March March,” which was released the same day they announced they were dropping the word Dixie from their name, was inspired by student-led demonstrations over gun control in 2018.

“We were all at March for Our Lives with Emma Gonzalez leading that charge,” said Strayer. “We were in the hundreds of thousands of people in that march. And it’s the first time I’ve ever experienced something like that. And it was very powerful.”

On “Juliana Calm Down,” their daughters and nieces are name-checked in a song that encourages young women to keep their heads held high when struggling through life’s obstacles. Maines is speaking to her two teenage boys on “Young Man,” a song for divorced parents who feel like they’ve let down their kids.

Still fans have been quick try to associate very specific lyrics from “Gaslighter” to Maines’ contentious divorce to actor Adrian Pasdar. Between the three women, they’ve had five divorces, so they said people shouldn’t read too literally into the words.

RELATED: Country band Lady A files suit against singer who has used name for 30 years

“I think people had it in their minds that this album is about one thing and one thing only, and it’s not," said Maines. "People are jumping to conclusions.”

Hit pop songwriter Justin Tranter, who has penned hits for Justin Bieber, Selena Gomez and Imagine Dragons, helped The Chicks co-write some of the album's most raw, vulnerable breakup songs, including “Sleep at Night."

“Some of those pre-choruses are not songs,” said Tranter. “Natalie was just talking and I was literally writing down what she was saying and then I found a way to put it to a melody.”

“Gaslighter” was recorded and co-written with Jack Antonoff, the Grammy-winning producer-artist known for recording with pop’s female elite: Taylor Swift, Lana Del Ray, Lorde and Sia. Antonoff pushed them to use their core strength, the three-part harmonies backed by fiddle and banjo, in new ways.

Their last album, 2006's “Taking the Long Way,” earned five Grammys, including album, record and song of the year, and won over masses of fans who never listened to them before. But it’s unlikely the fans who turned their back on The Chicks 17 years ago are going to feel any different about the band’s return.

When The Chicks and Beyoncé performed at the Country Music Association Awards in 2016, a vocal minority unleashed their anger on social media at the idea that both artists would be invited to perform.

The Chicks knew the high-profile awards show performance would get some criticism, but they were upset after the CMA briefly removed promo videos online of the performance. The CMA later said the clips were not approved, so they were removed before the broadcast.

“The CMAs were absolutely wrong to cower to that racism," said Maines. "It was disgusting. It’s good that they put it back up, but it should have never come down.”

“When you invite (Beyoncé) knowing that she’s going to bring that elevation to the show and those eyeballs and then you diss her like that, it’s twisting the knife,” said Strayer.

How about we kick off release week with a stream of MMXVI?? Tune in on @youtube Saturday, July 11th at 12pm ET / 9am PT. Set a reminder now: https://t.co/JA792ZE2b8 pic.twitter.com/PaXFDOK7T4

Although their fallout occurred before Twitter or Facebook, The Chicks have a unique viewpoint on the rise of cancel culture, when prominent people are attacked online in an almost mob mentality.

“On one hand, you know, it’s freeing now. People just are way more vocal," said Maines. "But then the downside is one slip up, one major slip up, and no publicist can make that go away.”

Maines said for movements like #MeToo, those speaking out online held people accountable. “And you can’t silence or quiet them when you’ve got so many women coming forward,” Maines said.

The phrase “shut up and sing” is still used as a weapon against women, minorities and anyone straying from their musical lane. But The Chicks think younger music fans don’t adhere to that idea.

“There’s not a whole lot of respect anymore if you’re just going to smile and entertain,” Maines said. “They want you to have a point of view.”

Strayer added, “My 15-year-old won’t even let me use a filter on my phone! They want real.”

While the break between albums was longer than any of them anticipated, they realized they still had important things to say.

“We have to say things when the time is right to say them, and we’ve been quiet for 10 years, so get ready,” Strayer said with a laugh.