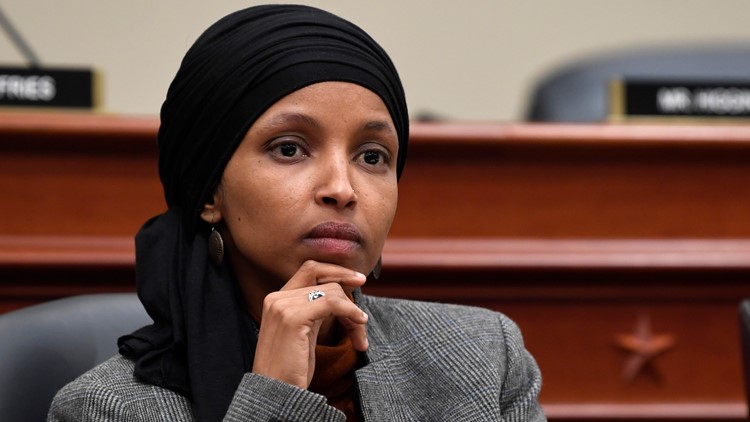 Photo by: AP
File- This March 12, 2019, file photo shows Rep. Ilhan Omar, D-Minn., listening as Office of Management and Budget Acting Director Russell Vought testifies before the House Budget Committee on Capitol Hill in Washington. A Minnesota campaign finance board says Omar violated state rules when she used campaign funds to pay for personal out-of-state travel and help on her tax returns. The Minnesota Campaign Finance and Public Disclosure Board said Thursday, June 6, 2019, that Omar must reimburse her former campaign committee nearly $3,500. The first-term Democratic congresswoman also must pay the state a $500 civil penalty for using campaign money to travel to Florida, where she accepted an honorarium. (AP Photo/Susan Walsh, File)

Minnesota campaign finance officials said last week that U.S. Rep. Ilhan Omar misused campaign funds in violation of state rules. They also revealed that she had filed joint tax returns with her husband years before they were legally married and at a time when she was married to another man.

The revelation put the freshman representative under more scrutiny from critics who have taken issue with her marital past. One tax expert said that if there is no criminal intent and the issue has been corrected, she's unlikely to face any criminal consequences.

Some questions and answers about the tax issue:

Q: What did Omar do wrong?

A: The Minnesota Campaign Finance and Public Disclosure Board said Thursday that Omar and her husband, Ahmed Abdisalan Hirsi, filed joint tax returns for 2014 and 2015 — before they were actually married and while Omar was legally wed to another man. While some states allow for joint filing for "common law" marriages, Minnesota does not, and filing joint tax returns with someone who is not your legal spouse is against both federal and state law.

Q: How did this become public?

A: Last year, a Republican state representative accused Omar of misusing campaign funds, alleging among other things that she used $2,250 in campaign money to pay a lawyer for her divorce proceedings. The campaign finance board investigated and found she didn't use the funds to pay for a divorce lawyer as alleged, but other irregularities were found. The board's final report said "there was an issue with her tax returns that needed to be corrected" and that some campaign funds went to an accounting firm.

State officials ruled last week that Omar must repay her campaign committee nearly $3,500, including $1,500 for payments made to the accounting firm for services related to joint tax returns for 2014 and 2015. Omar must also pay a $500 penalty to the state.

Q: What has Omar said about this?

A: Very little. In response to questions from The Associated Press, her campaign sent an emailed statement saying, "All of Rep. Omar's tax filings are fully compliant with all applicable tax law." The campaign did not make Omar available for an interview or answer specific questions from the AP. In response to the overall campaign finance investigation, she said in a statement last week that she will comply with the state board findings calling for her to repay money and pay a penalty.

A: During her brief time in Congress, Omar has been outspoken on issues such as U.S. policy toward Israel and the Middle East. As one of the first two Muslim women in Congress she has faced heightened scrutiny and has been accused of making anti-Semitic remarks. In response to some of her comments, the U.S. House of Representatives passed a resolution condemning hate speech against all groups. She has denied her comments were anti-Semitic and says she has come under political attack because she is a Muslim and woman of color.

She has also been dogged by conservatives who have raised questions about her past. She came to the United States as a refugee from war-torn Somalia. In 2016, as Omar was running for a seat in the Minnesota House, conservative bloggers alleged she was married to two men at the same time. Marriage records show that's not the case. Conservatives also alleged that one of those men, Ahmed Nur Said Elmi, was her brother — allegations that Omar called "disgusting lies."

According to marriage records, Omar applied for a license in 2002 to marry her current husband, Ahmed Abdisalan Hirsi, who Omar says went by Ahmed Abdisalan Aden at the time. A marriage certificate wasn't issued and Omar has said they didn't pursue a civil marriage but instead married in their Muslim faith tradition. Omar and Hirsi had two children, but ended their relationship in 2008.

Omar then married Elmi, whom she said is a British citizen, in 2009, according to a marriage certificate. Omar said that relationship ended in 2011 and the two divorced in their faith tradition, but Omar didn't take legal action to divorce him until 2017. Divorce records say Omar and Hirsi reunited and had a third child together in June 2012. Omar legally married Hirsi in early 2018, a month after her divorce from Elmi was finalized.

Q: Did Omar gain something by filing jointly?

A: It's hard to say. In most situations, filing jointly may reduce taxes for married couples. But Eric Johnson, an attorney who practices tax law in St. Paul, Minnesota, said that's not always the case and filing jointly might actually increase a tax bill for some.

Q: Is Omar now in trouble with the IRS?

A: That's not clear. The IRS says federal privacy law prohibits it from commenting.

Jeff Sigurdson, executive director of the Minnesota Campaign Finance and Public Disclosure Board, said that while the board has authority to refer matters to a county attorney if it discovers an issue, there were no referrals made in this case. Sigurdson said the board did not look into the legality of the joint tax returns, but only "whether it was appropriate to use committee funds to get a copy of them." Sigurdson said the board never saw the returns in question.

Johnson, the tax attorney, said if taxpayers incorrectly file tax returns as "married filing jointly" where there is no legal marriage, it is typically not a criminal matter unless taxpayers have a strong intent to cheat on their taxes, or unless they directly provide false factual information.

"If the IRS discovers the error, they send the resulting tax bill to the taxpayers," Johnson said. "If the taxpayers discover the error ... amend their returns and pay the tax, there is typically no further consequence."

Q: Will the public ever know what happened?

A: Probably not, unless Omar decides to talk about it. Taxpayer information is protected under federal law. Johnson said the IRS can't disclose the status of anyone's tax issues or directly release information about Omar's tax situation.