The Pentagon says that the 'aerial phenomena' seen in three Navy videos remains characterized as 'unidentified.' 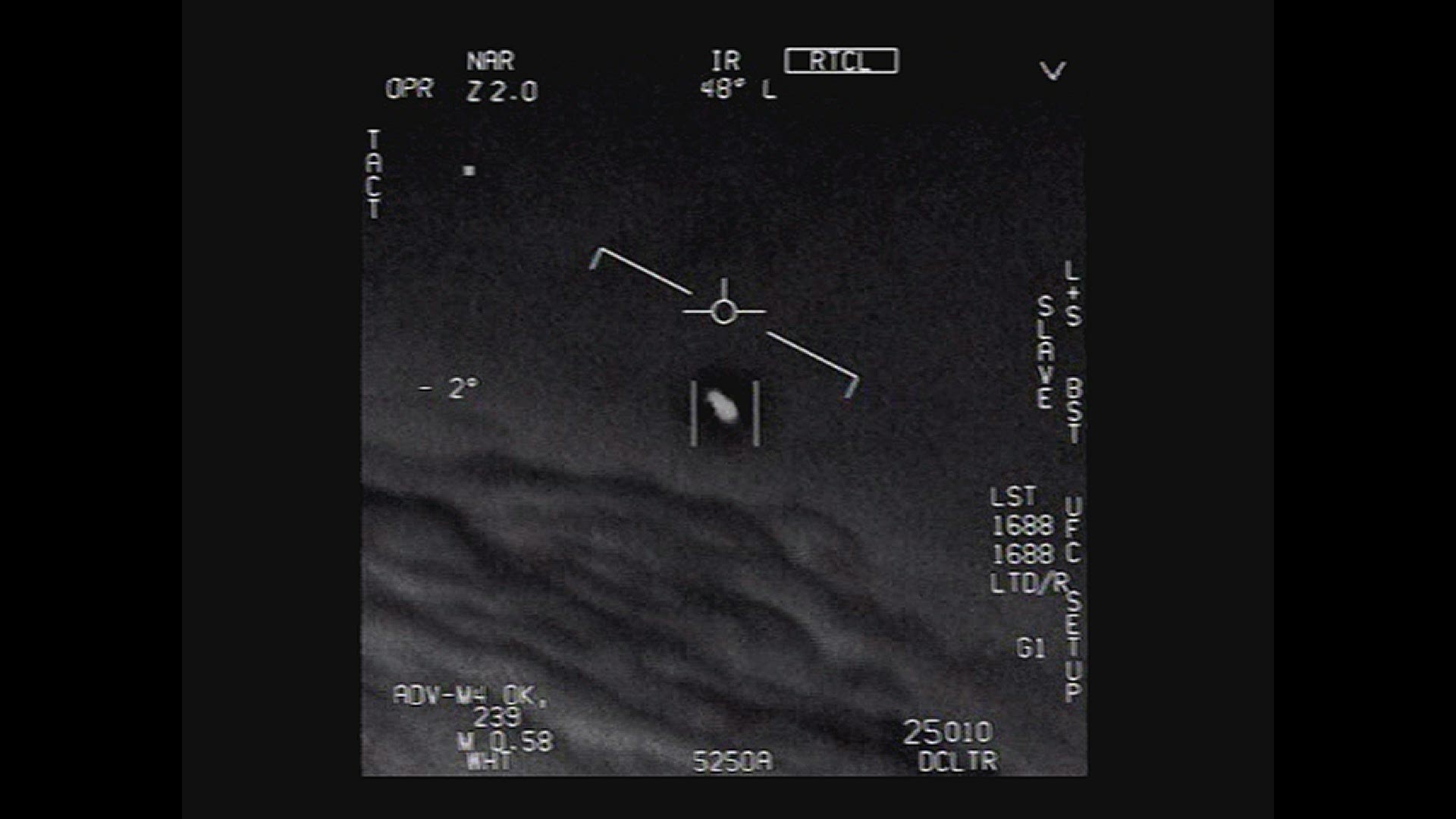 WASHINGTON — The Pentagon on Monday officially released three Navy videos of "unidentified" flying objects which have previously been leaked to the public by an organization led by former Blink-182 rocker Tom Delonge.

The videos, taken with infrared cameras, show what seemed to be unidentified flying objects moving rapidly. In two of the videos, military service members can be heard reacting to how quickly the objects were moving. One of the videos was taken in November 2004 and the other two were from January 2015, according to the Pentagon.

In a statement, the Department of Defense said that "after a thorough review, the department has determined that the authorized release of these unclassified videos does not reveal any sensitive capabilities or systems."

The Pentagon added that the "aerial phenomena" seen in the videos remain characterized as "unidentified."

In September 2019, the Navy confirmed the videos were real, but should never have been released back then. The Washington Post and The New York Times reported at the time that the video was obtained and released by DeLonge's organization.

In a 2017 interview with CNN, Commander David Fravor, a former U.S. Navy Pilot explained one of the videos was "something I had never seen in my life."

Fravor said while it's easy to doubt what you can't explain, he said there were at least four people watching the object for around five minutes before it rapidly accelerated. Fravor was adamant that it wasn't a weather balloon or some easily explained object that was misidentified.

Because of strong interest in the possible existence of UFOs by former Senator Harry Reid of Nevada, the Pentagon has researched their existence in a once classified project at the Pentagon, the New York Times reported in 2017. The program investigated various reports of unidentified flying objects, Department of Defense officials have said.

RELATED: UFO videos posted by Blink-182 are real and never should have been released, Navy confirms

Some members of Congress are still interested in examining the issue. Reid retired from Congress in 2017 and has said he's “not embarrassed or ashamed or sorry I got this thing going." Reid said “I think it’s one of the good things I did in my congressional service. I’ve done something that no one has done before.”

RELATED: More than 200 UFO sightings reported in Arizona in 2019

In 2019, a group of senators received a classified briefing on UFO sightings, including the vice chair of the Senate Intelligence committee. A spokesperson for Democratic Virginia Sen. Mark Warner said at the time that "If pilots at Oceana or elsewhere are reporting flight hazards that interfere with training or put them at risk, then Senator Warner wants answers. It doesn't matter if it's weather balloons, little green men, or something else entirely — we can't ask our pilots to put their lives at risk unnecessarily."

The Navy now has formal guidelines on how pilots are allowed to report what they believe to be UFOs, saying in a statement in 2019 they were formalizing the process. One Navy official, at the time, said that the Navy does not believe aliens have been flying in US airspace.