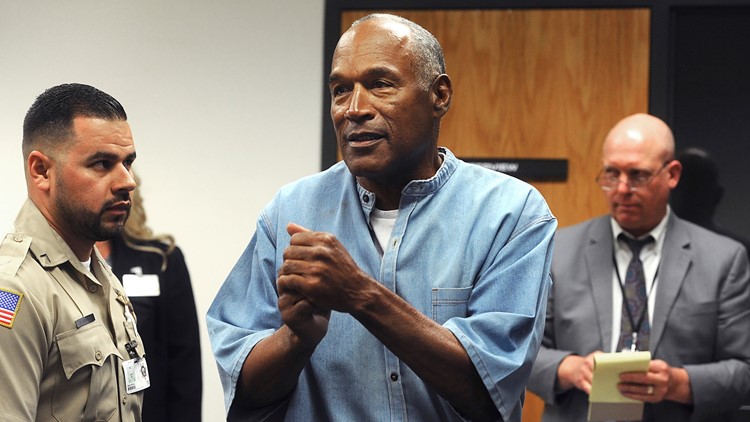 Photo by: AP
FILE - In this July 20, 2017, file photo, former NFL football star O.J. Simpson reacts after learning he was granted parole at Lovelock Correctional Center in Lovelock, Nev. Simpson got into a series of minor legal scrapes following his 1995 acquittal of murder charges in the deaths of his wife Nicole Brown Simpson and her friend Ronald Goldman. (Jason Bean/The Reno Gazette-Journal via AP, Pool, File)

O.J. Simpson joins Twitter: 'I've got a little getting even to do'

"Hey Twitter world, this is yours truly," he said in the video. "Now, coming soon to Twitter, you'll get to read all my thoughts and opinions on just about everything."

Simpson said there were a lot of fake Twitter accounts in his name, and reiterated that @TheRealOJ32 was the only authentic one. "I've got a little getting even to do," he said, ending the video. "So God bless. Take care."

The video is the account's only tweet currently. Since it was uploaded, the account has gained 147K followers. However, the account doesn't have Twitter's verified blue check mark yet.

The video comes just days after the 25 anniversary of the murders of Simpson's ex-wife, Nicole Brown, and her friend Ron Goldman. Simpson was famously acquitted of both murders in 1995. He later spent time in prison in relation to an armed robbery. He was released in Oct. 2017, after nearly a decade.