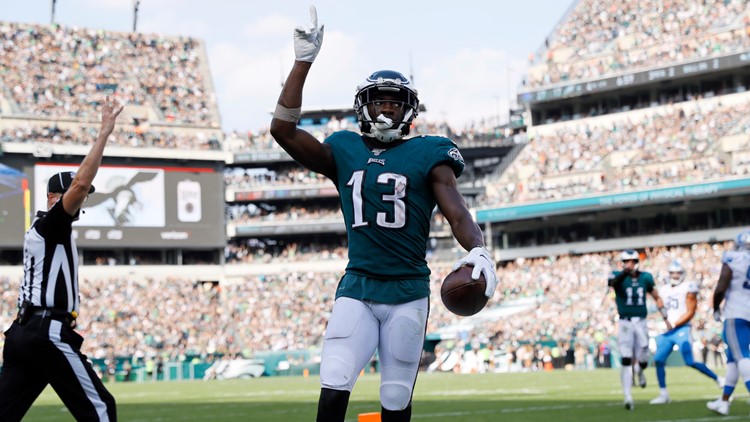 Photo by: AP
Philadelphia Eagles' Nelson Agholor (13) celebrates after scoring a touchdown during the second half of an NFL football game against the Detroit Lions, Sunday, Sept. 22, 2019, in Philadelphia. (AP Photo/Michael Perez)

Nelson Agholor invites hero who criticized him to a game

PHILADELPHIA — Philadelphia Eagles wide receiver Nelson Agholor has invited a man who rescued children from a burning house to be his guest at a game after the former firefighter criticized Agholor's catching skills during a television interview.

Hakim Laws said he was walking in the area of a house fire when he jumped into action. According to Laws, he waited outside while another man entered the building to help.

"My man just started throwing babies out. ... And we were catching them, unlike Agholor," Laws said.

RELATED: Detroit Lions hold on for 27-24 victory over Philadelphia

Agholor dropped what would have been a go-ahead 60-yard touchdown pass in Philadelphia's loss at Atlanta in Week 2. He had a few more drops in a 27-24 loss to Detroit on Sunday.

The video of Laws' interview was the talk of Philly on Monday and had been viewed several million times.

"Thank you for being a hero in the community," Agholor wrote on Twitter. "Would like to invite you and your family to the next home game."