National Guard sleeping in the Capitol an echo of Civil War

The Capitol was used as a bivouac for troops during the Civil War. 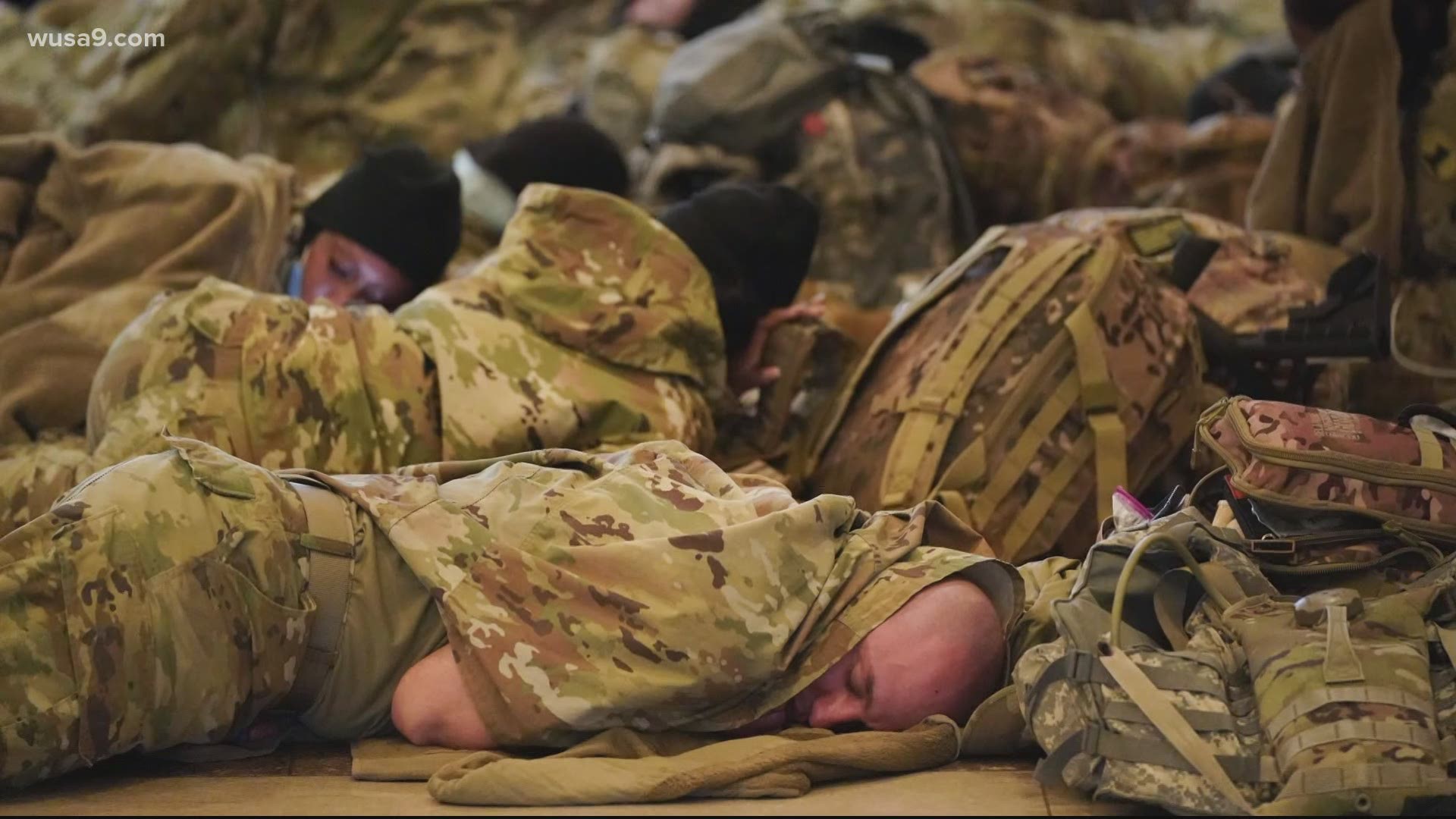 WASHINGTON — To most Americans, the sight of armed National Guard troops sleeping in the Capitol Rotunda this past week was shocking and disturbing. To me, it was an echo of the far-distant past.

“Don’t despond,” Maj. Bowman Bigelow Breed wrote to his anxious wife back home in Massachusetts as his comrades lounged around him on the polished marble floors in the grand hall that was now their bivouac. “You must know by this time that we are here in safety. We may have to fight but my own opinion is that the overwhelming force concentrated here will prevent an attack.”

Insurrection was in the air, and these citizen soldiers had been called up to secure the seat of government.

The date was April 27, 1861. The writer was surgeon of the 8th Massachusetts Volunteer Militia.

Having transcribed my great-grandparents’ Civil War correspondence, I knew that Bowman’s unit had spent the first days of the war bivouacked in what he called “the Hall of the Dome.” Harper’s Weekly published an illustration of the 8th’s men, their weapons leaned against the marble walls or stacked, bayonets intertwined, like fodder shocks in a farmer’s field.

Credit: AP
This illustration in the May 25, 1861 issue of Harper's Weekly depicts the Eighth Massachusetts Regiment with some civilians, and mattresses on the floor in the rotunda of the Capitol in Washington. To most Americans, the sight of armed National Guard troops sleeping in the Capitol Rotunda this past week was shocking and disturbing. But it also was an echo of the far-distant past — the Capitol was used as a bivouac for troops during the Civil War. (Harper's Weekly/Wilson's Creek National Battlefield via AP)

“I wish you could look in on us this morning and see how comfortably we are settled here,” he wrote in that first missive, scribbled on letterhead for the “Thirty Sixth Congress House of representatives.”

RELATED: 6 questions about how Trump will spend rest of his presidency

The regiment called itself “the Minutemen,” after those New England patriots who grabbed their muskets and rushed to face the Redcoats at Lexington and Concord in April 1775. My great-grandmother, Hannah Pope Breed, was descended from one of those men.

And, so, when President Abraham Lincoln called for 75,000 volunteers to put down the inusrrection of the Southern states, there was no question but that Bowman -- privileged son of a wealthy industrialist -- would go.

The 8th headed south just four days after rebels opened fire on Fort Sumter. Passing through hostile territory in slaveholding Maryland, Bowman was unable to fulfill his promise to write every day.

“How I have suffered when I knew that all communication was cut off and that you were torn hour after hour by the terrible suspense of hope deferred,” he apologized to Hannah, who was left alone to care for their infant son, Isaiah. “Don’t despond my darling. God will preserve us all and in time of war you must have faith in the handy old proverb that no news is good news.”

While the enlisted men slept in the rotunda, the 10 officers shared a small room just off the main hall.

“A little room opening from that serves for my hospital, very small and very inconvenient,” Bowman wrote. “I have not been able to open my medical stores yet and can use only what I can carry about in my bag. I have been on the run Ever since I came here, trying to arrange matters, but red tape rules here and I have been referred from one to another till I am tired out.”

The Capitol was undergoing a massive expansion. The regimental chaplain held services in the old Senate chamber.

“The men all stood in a circle with the officers on one side and the chaplain in the centre,” he wrote. “He made a very appropriate prayer and then we all sang, `Praise God from whom all blessings flow.’”

Credit: AP
Hundreds of National Guard troops hold inside the Capitol Visitor's Center to reinforce security at the Capitol in Washington, Wednesday, Jan. 13, 2021

The day after their arrival, Bowman and his comrades were treated to a visit from Secretary of State William H. Seward and the president himself.

“We were all introduced and had quite a chat with them,” he wrote. “They were both in good spirits. Lincoln said that if the city had been as unprotected then as it was a week before it would have been taken.”

The regiment was drawn up, Bowman said, “and the Pres made them a little speach.” It was early in the Republican’s first term, and most did not yet know what to make of this “dirty Hoosier,” as Hannah referred to the Kentucky-born, Indiana-bred Lincoln.

“All that has Ever been said of Lincolns awkwardness is mild compared with the reality,” Bowman wrote. “Some of his gestures would make the fortune of a circus clown.”

Nonetheless, the new president inspired confidence in the citizen soldiers.

“The men gave three cheers for Lincoln, three for Seward and three rouses for the Union,” Bowman wrote.

When the 8th was stationed there, the higher, more ornate Capitol dome was not yet complete. As the war dragged on, critics suggested that the costly work be halted.

“If people see the Capitol going on,” he said, “it is a sign we intend the Union shall go on.”

Bowman would serve throughout the entire war. As painful as their separation would be, he told Hannah in that first letter from Washington, he hoped that the struggle was “the means God in his goodness has provided to remove the dark cloud under which we have seemed to be resting for so long.”

“I have faith to believe that all our steps are ordered for the best,” he wrote. “Let our prayers mingle now as heretofore and all the blessing of a holy calm will descend, to strengthen us.”

RELATED: After Trump, Joe Biden aims to reshape the presidency itself