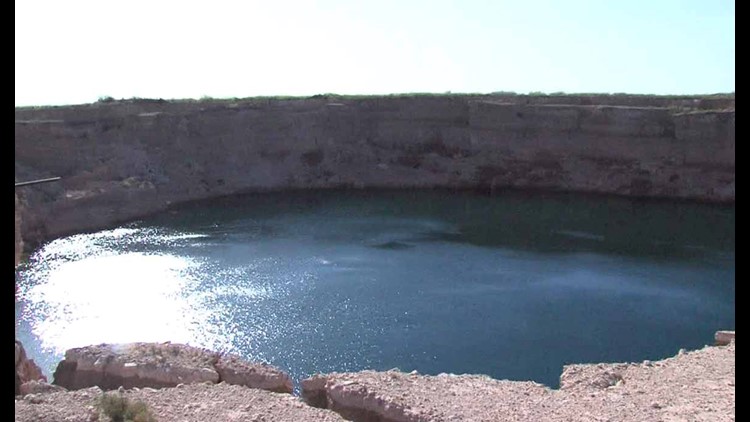 The Wink sinkholes have been the talk of the town since they were first discovered several years ago, but now one of those sinkholes is causing some serious concerns."It's a couple, three football fields, and it's probably 125 feet deep,"
Author:
Published: 2:28 AM CDT April 17, 2014
Updated: 9:05 PM CDT July 20, 2018
By Geena MartinezNewsWest 9

WINKLER COUNTY - The Wink sinkholes have been the talk of the town since they were first discovered several years ago, but now one of those sinkholes is causing some serious concerns.

For years, the wink sinkholes have been capturing the curiosity of locals and out-of-towners, but "Wink Sink # 2" has Sheriff Keely worried.

That's because the sinkhole is growing.

"It's dangerous, the roads are moving, " Sheriff Keely said. "The roads actually lift up in places and drop in places."

Large cracks run down county roads near the sinkhole and huge crevices have formed in the ground.

Whatever's happening underneath became evident last week when a big rig made a trip out on one of the county roads.

"It cracked, the road itself cracked," Sheriff Keely said. "The first crack we actually had in that county road was about a foot wide and it was an asphalt crack. Now that same crack has widened to about three and half, four feet wide."

After the road split last week, crews filled it with kaliche but holes are still popping up.

"A lot of them are oilfield traffic and 80,000 pound trucks," Sheriff Keely said. "I'm just concerned the stress from the weight of the trucks is gonna cause the damage to escalate quicker."

Sheriff Keely said he's not sure what the long term answer is but they are monitoring the area.

"There's a commission that's looking into all this and has been studying it, they were out here last week," he said.

For now, Sheriff Keely is reminding residents that your curiosity could cost you.