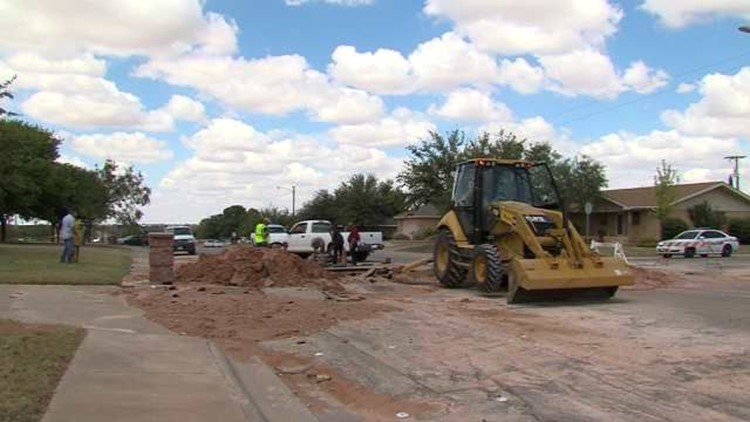 BIG SPRING - Two main water lines burst in Big Spring, which led to some students taking the day off.

"This is really the first major leak we've had in six months. The strange thing, is we've had two of them in one day," Big Spring Environmental Service Assistant Director, Johnny Womack, said.

Homes and a few schools were without water after transmission lines broke on Baylor and also at 10th and Goliad.

The high school was closed for the day and a couple of elementary schools were also dismissed early.

Big Spring High School Associate Principal, Jay Kennedy, has been in the district for about 25 years and he says during that time they've had about three different issues that required either a delay of school or postponement. He said that it disrupted their homecoming week hoopla, as well as learning.

"I don't think you could make it through a day of school without going to the restroom at least once," Emily McKinley, a junior at the school, said.

The city found the broken pipe around 3:30 a.m. They alerted the district and the media to spread the news that the high school would be shut down- Nerd Day as part of the school's Homecoming Week, would not be happening.

Meanwhile, the workers started digging up the damage soon after. Womack said the crew working there had been out for 24 hours, so, "I sent them home to get rest because of safety issues."

Then city officials from multiple departments had stepped in to get dirty right with the remaining workers. The bunch includes the city manager and fire chief among others.

Officials said they don't know how much water was lost but their priority was finding out what caused the breakage.

They found that the line by the high school had a faulty bell joint. The other transmission line is newer though, so the cause of the break is believed to be a water hammer, which is a surge of water that acts kind of like a tsunami in the pipes.

"Until we expose the pipe, we won't know what it'll take to fix it," Womack said.

"I know the city is doing the best they can, and we support them, and we want them to support us," Big Spring ISD Interim Superintendent, Chris Wigington, said.

Kennedy said the homecoming activities at night, including a bonfire and a senior event, will go on as planned.