Father and son arranged to meet in Portland, then sat down with KGW's Brenda Braxton just 90 minutes after seeing each other face-to-face for the first time. 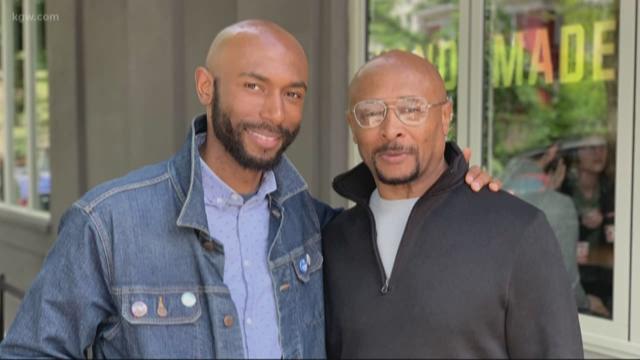 PORTLAND, Ore. — During his talk at TEDx Portland in April, Kary Youman told the story about how he'd received an email months earlier that changed his life and "shook the core of [his] entire family tree."

Youman said after more than two decades without knowing who his biological father was, he'd finally summoned the courage to order a DNA kit in 2018.

Months later he received a notification from the DNA company and a personal message that read, "Hi. My name is Robert. I stumbled on your profile today and I am in extreme shock. It says that you are definitely my son? I'm very curious about this match. Please respond."

After several back-and-forth messages, the two decided to talk on the phone, and the conversation lasted for six hours. Youman discovered that his dad is a Grammy nominee.

Who exactly was his dad, Robert? Youman left the stage at Keller Auditorium in April without saying. And at that time they still hadn't met face-to-face. That's one heck of a cliffhanger, so I tracked him down to see how the story ended.

Father and son arranged to meet here in Portland, and sat down with me just 90 minutes after seeing each other face to face for the first time. Wow!

Kary tells me why he's sharing this personal story and what he hopes you'll learn from his journey that could help make your own family stronger.

Poignant. Inspiring. Funny. Reflective. This conversation is all that. And to answer the cliffhanger, his father is songwriter Robert D. Palmer, who has worked with Chaka Khan and with Prince. Plus, if you're a Prince fan, you'll love the detour we took to Paisley Park.