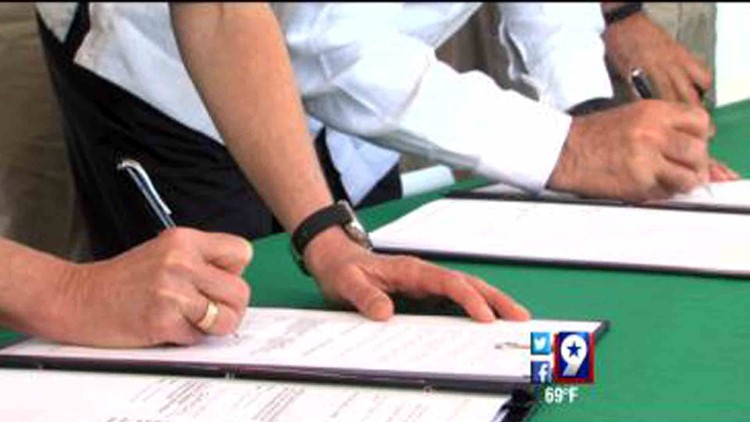 U.S. and Mexico Officials Signed the Wildfire Protection Agreement as a Collaboration Effort

BOQUILLAS, MEX - The United States and Mexican officials are working together to fight wildfires. They signed an agreement Friday, called the Wildfire Protection Agreement, that will allow the partnership to bring both sides of the border together to help prevent and manage wildfires that can be very dangerous the environment of the Big Bend-Rio Bravo region.

Sally Jewell, U.S. Secretary of the Interior, said, "It will be nice to sign a new agreement, that updates the agreement from 1999, that will take us beyond 10 miles or 16 kilometers to cross our border and in to both countries as we fight the wildlife fires that are going to be getting hotter, dryer, and more dangerous in this time of a changing climate."

With such a long area of border shared between Mexico and the U.S., it was time to make a change.

Will Hurd, U.S. Representative, District 23, said, "We share over 2,000 together and fires know no boundary. And in having agreements in place, in advance, so that we can make sure that we stop these no matter where the fires stops and that we pool our resources in order to preserve our areas protect our citizens and protect the bio diversity that's here i this region."

U.S. Secretary Jewell and Juan Jose Guerra Abud, the Mexican Environment and Natural Resources Secretary along with other U.S.-Mexico officials came together to sign the Wildfire Agreement as another step in preserving the Big Bend-Rio Bravo region.