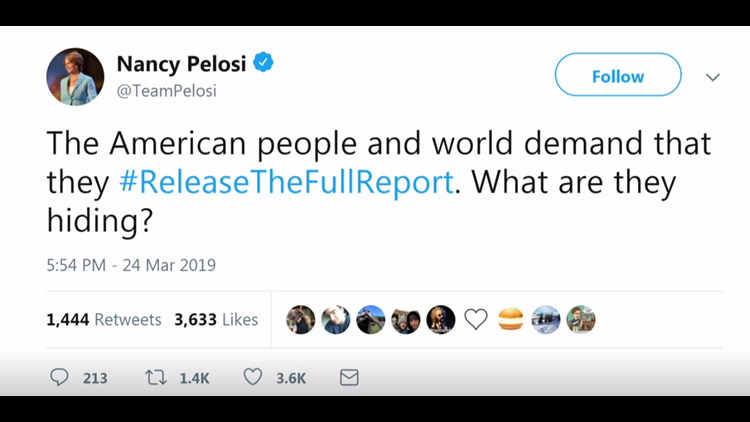 Pelosi, the House speaker, and Schumer, the Senate Democratic leader, said Sunday that Barr’s letter to Congress about Mueller’s report “raises as many questions as it answers.”

In a joint statement, the leaders say that Barr’s past “bias” against the special counsel inquiry shows he is “not in a position to make objective determinations.”

The American people deserve the truth. AG Barr must #ReleaseTheFullReport.

They say that "the fact that Mueller's report does not exonerate the president on a charge as serious as obstruction of justice demonstrates how urgent it is that the full report and underlying documentation be made public without any further delay."

Other Democrats have also shared similar sentiments on social media:

I don’t want a summary of the Mueller report. I want the whole damn report. https://t.co/VU1oNfBMK0

The Mueller report needs to be made public, the underlying investigative materials should be handed over to Congress, and Barr must testify. That is what transparency looks like. A short letter from Trump's hand-picked Attorney General is not sufficient.

The American public deserves the full report and findings from the Mueller investigation immediately—not just the in-house summary from a Trump Administration official. https://t.co/8Lj0O881Cw