Texans are seeing some of the impacts reflected on the grocery store shelves. 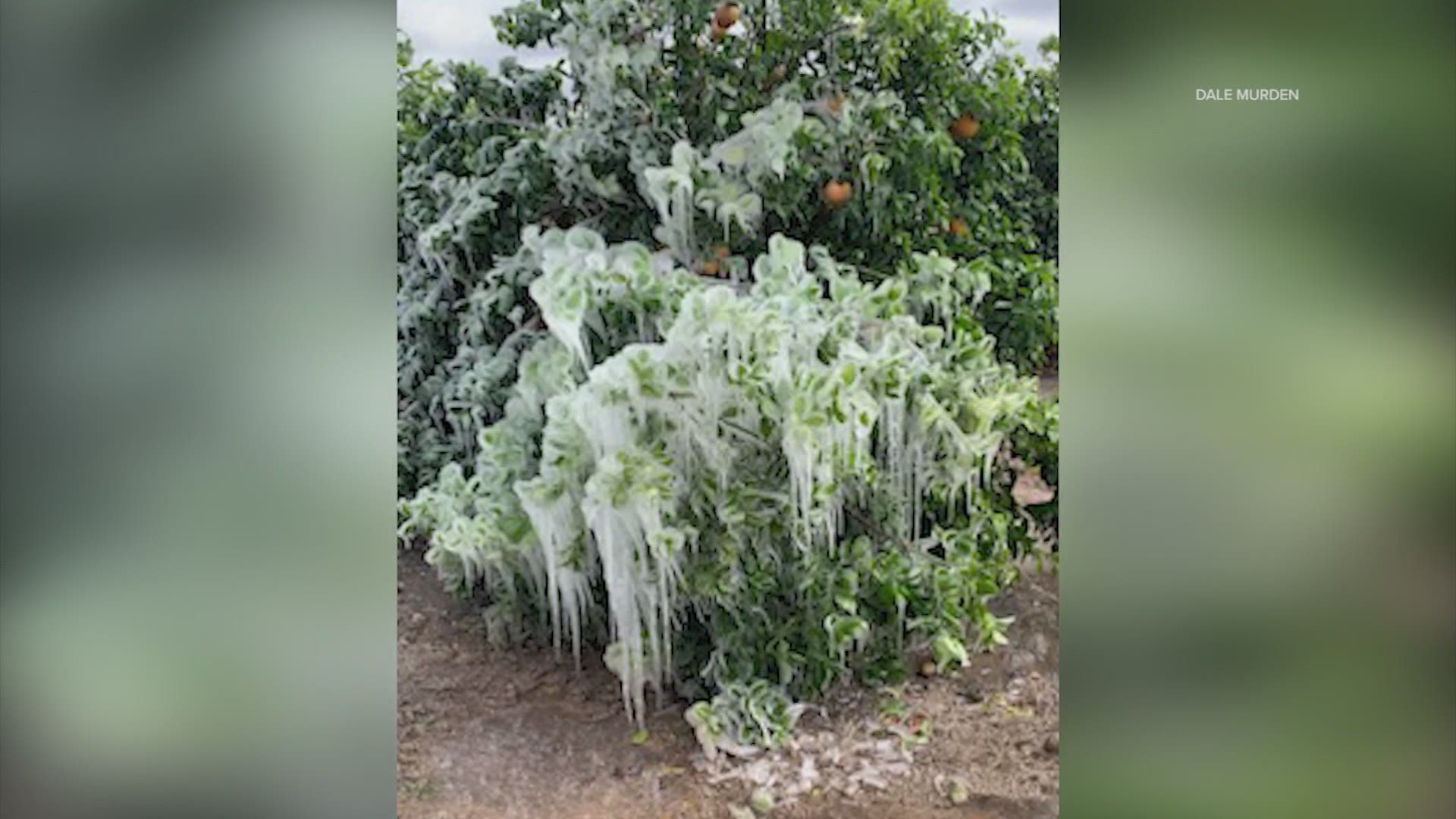 TEXAS, USA — Many of us who don’t grow food and consume it with the ease of a grocery store trip may not realize or give a second thought about all it takes to make it.

It's not only the effort, but the electricity necessary for basically all things.

This week, most of Texas went dark and cold, creating problems for food makers and growers across the state.

“I'm getting a lot of airtime for all the wrong reasons,” said Dale Murden.

A citrus grower in the Rio Grande Valley and the President of the Texas Citrus Mutual, the Growers’ Association in the Valley, has been talking to journalists across the country.

He said the storm wiped out his crop this year and possibly next.

“I've had reports in certain groves of 18 degrees,” he said. “So for us, anything under 28 degrees is too cold for citrus in production.”

The hard work of many others in the Rio Grande Valley is ruined, too. Murden said Hidalgo County makes up about 80 percent of the citrus industry, shipping all over the United States, Canada and Europe.

He said the growers hoped to ship about 12 million cartons by the end of the year, with the season running October, April and May.

“In an 11-month period of the pandemic, we've had drought, we've had hurricane and now we've had freeze,” he said. “It's like the perfect trifecta.”

Murden said the estimated costs for this year’s crop loss is about $78 million. If the industry doesn’t produce a crop next year, the estimated loss could be as high as $225 million.

Total damages are hard to estimate right now, because it’s too early to say if some trees will be lost. The next few weeks will tell.

“There's going to be growers that are done after this, and they'll look to remove their trees,” Murden said.

"Texas agricultural producers continue to be greatly affected by the severe ice and freezing temperatures; these weather conditions have substantially affected producers and caused severe production losses," Gov. Abbott wrote to USDA. "These producers are in need of U.S. Department of Agriculture (USDA) assistance to return to normal operations. For example, early estimates made by Texas Citrus Mutual show Texas citrus sustained approximately $305.0 million loss to the crop in Cameron, Hidalgo, and Willacy counties. Total damage assessments are still being calculated, but daily agriculture operations across the entire state have been slowed both by the novel coronavirus (COVID-19) and by loss of electricity and continued freezing temperatures caused by severe winter weather."

Gov. Abbott said as more losses are assessed in additional counties, he will request more help from the USDA.

Citrus growers are just some of the victims of the winter storm and the Texas energy sector’s lack of preparedness for it.

“I've got people call me all the time that are stranded out of food, out of water. Their livestock are near death because they can't drink. They don't have any feed,” said Sid Miller, Texas Agriculture Commissioner, who himself is a rancher. “This is a catastrophe, and it's a lot.”

“Power went off in our milk processing plants,” Miller said. “We’re dumping about $8 million worth of milk every day now. No electricity, no gas. We can't pasteurize. We don't have electricity to bottle. So same thing in our poultry industry. We've got the newly hatched chicks down there freezing to death because the heat went off and frozen our incubators. The eggs will hatch because we can't keep them warm. We've got a distribution problem on the eggs, our feed mills have been shut down this whole time. They couldn't get electricity, they couldn't get gas, no feed.”

Texans are seeing some of this reflected on the grocery store shelves.

Murden measures recovery in months and years. Yet still, on a day when he talks about all he’s lost, he’s focused on all he has and why he loves it.

“You know, it's a lucky human being that gets to do what they love,” he said. “We've got ups and downs. Absolutely. No question about it. But, you know, any day I can walk out in the middle of this grove and play in the dirt. It's a good day.”

He just needs us to do the easy part buy local when he’s back.