Ken Paxton is still suing Texas school districts even though some aren't enforcing mandates. 6 News asked Paxton what it would take to drop the lawsuits. 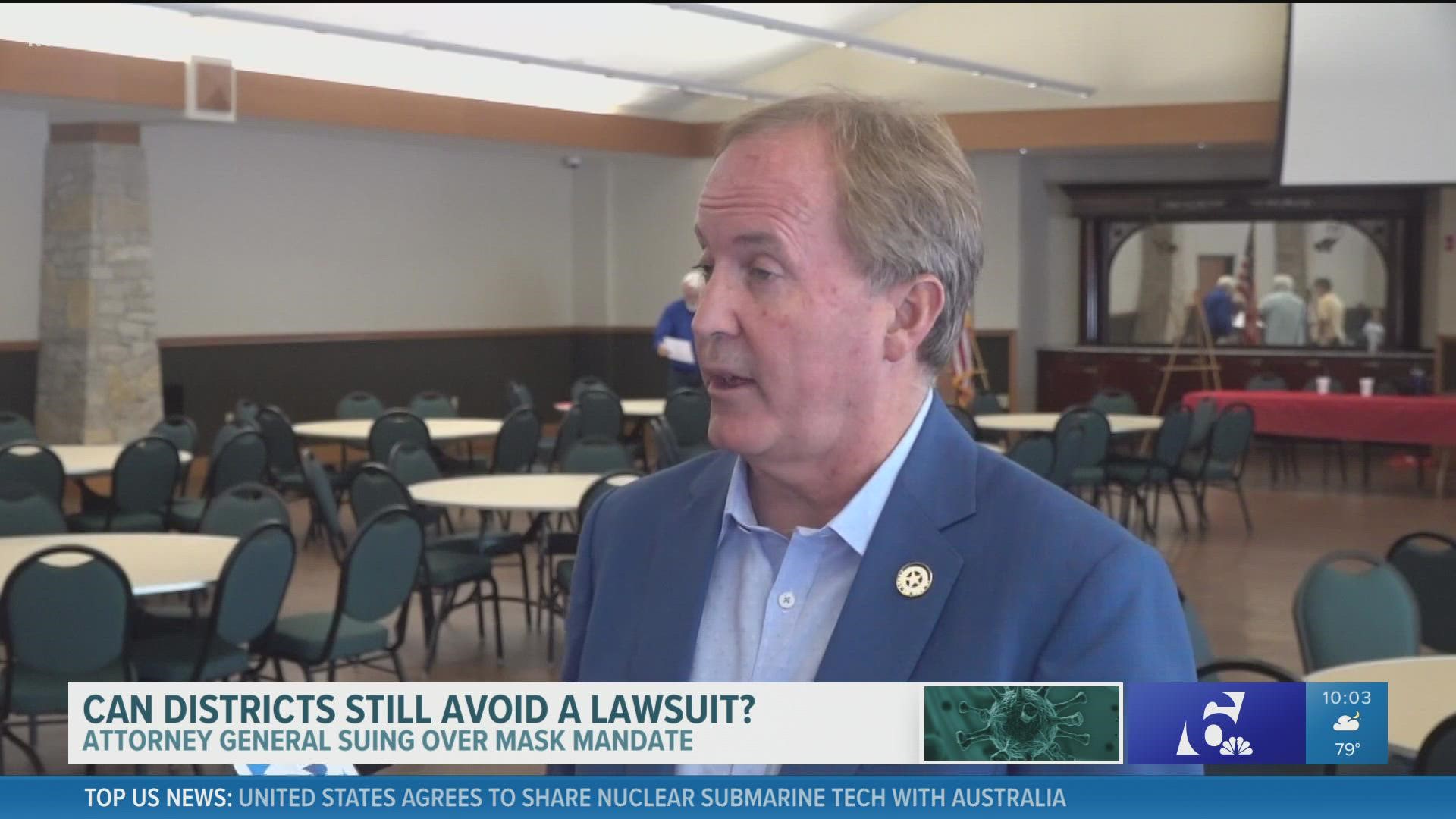 Midway and McGregor, however, both released statements saying they had not been enforcing a mask mandate and were disappointed to be named in the lawsuit.

6 News spoke to Paxton in person Thursday to find out what it would take to drop the suit. Paxton had dropped by the McLennan County Republican Club Monthly Lunch meeting to speak with local party leaders.

Before suing the school districts, the attorney general's office sent each district a warning letter on Sept. 7.

"I ask that you rescind your local policy requiring masks in public schools or, alternatively, not enforce it pending the Texas Supreme Court's disposition of the cases before it involving this issue. Otherwise, you face potential legal action brought by this office."

McGregor ISD told 6 News in a statement Tuesday it had not enforced its mandate while Midway ISD told 6 News it never mandated masks in the first place and had never planned to enforce a mask policy.

"There was no enforcement. There was no punishment for not participating in the request for 10 days. It was an ask. It was a plea for help to help us get through and not close campus for a few days. It was not a Mandate," Spokeswoman Traci Marlin said.

Both districts were included in the lawsuit anyway.

On Thursday, 6 News asked Paxton directly if school districts who were following the letter, and not enforcing a mandate, could be dropped from the lawsuit:

Paxton: I think if they would send something to our office, put out something publicly, that would certainly be a good step in the right direction. I'd have to see... We'd look at this individually, it's not like everybody does the same thing so I can't say for sure what would happen.

But that is what I would suggest: Is that they send us a letter and then put out publicly that they are not enforcing the mandate and then delete the mandate from whatever the policy. Because if it is still there, it is hard to believe that they wouldn't enforce it if they put it in their policies or whatever they call them.

6 News: Who do they need to send it to exactly?

Paxton: Send it to my office. They can send it to Grant Dorf­man. He's the Deputy First Assistant. That would be a good start right there.

6 News: And they would say, "We are not enforcing this?"

Paxton: Well they should say something about taking it out so it is not there. If it is still there it is hard to know whether they would enforce it or not just because they said they were or they weren't.

The most effective way to deal with this, just take it out and send us proof that it's out.

6 News: Can masking still be there as a voluntary policy?

Paxton: I think voluntary is no problem. It's forcing... According to the governor's order, the government can't force this. If individuals want to wear masks, absolutely they should be able to do it.

6 News: OK. And then for those school districts that had a mandate for when cases reach a certain level...