Gov. Abbott signs one of nation’s strictest abortion laws, banning procedure as early as six weeks into a pregnancy

The bill bans abortions after a fetal heartbeat has been detected. It includes cases where the woman was impregnated as a result of rape or incest. 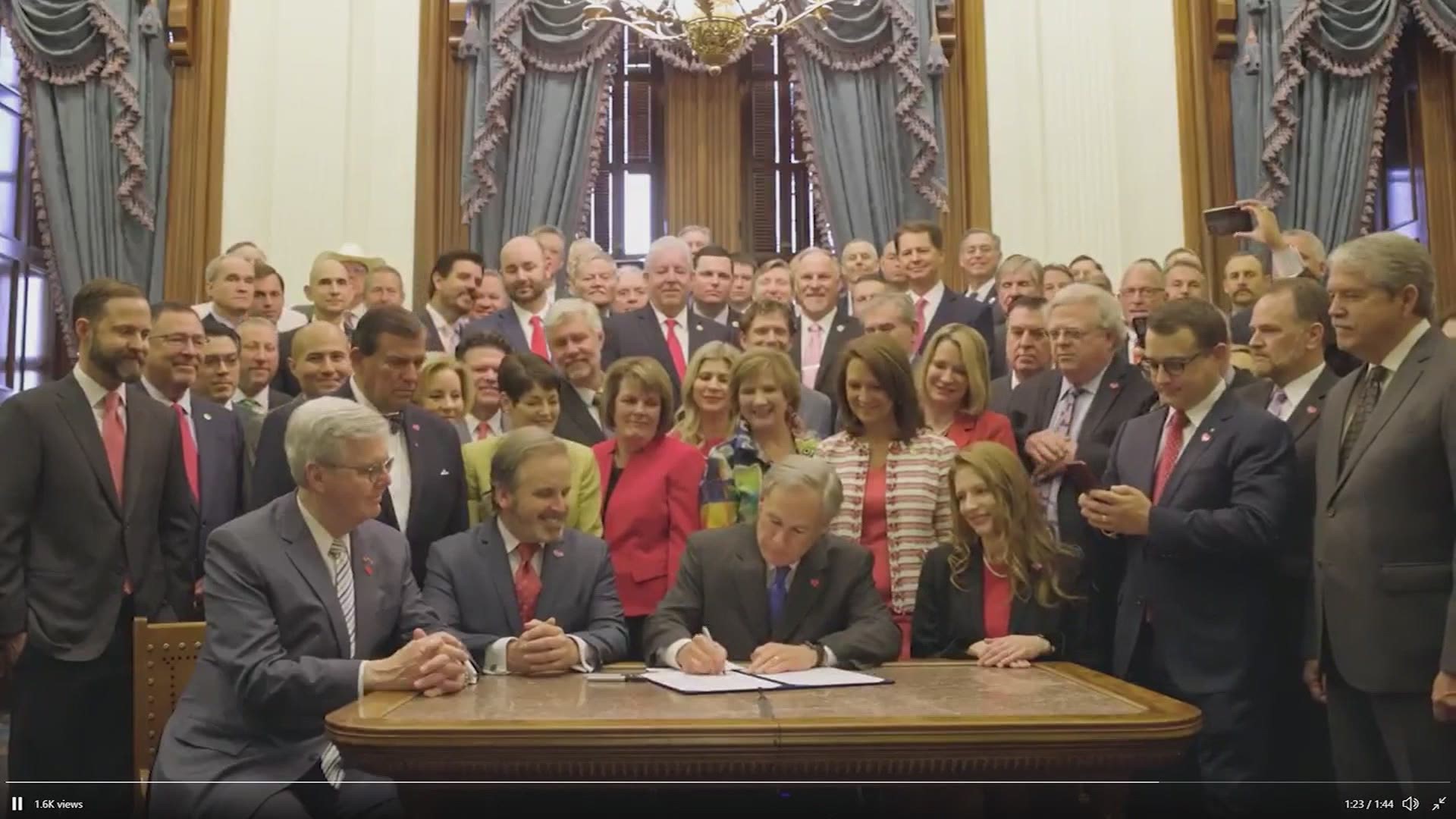 AUSTIN, Texas — Gov. Greg Abbott signed into a law Wednesday a measure that would prohibit  abortions in Texas as early as six weeks — before some women know they are pregnant — and open the door for almost any private citizen to sue abortion providers and others.

The signing of the bill opens a new frontier in the battle over abortion restrictions as first-of-its-kind legal provisions — intended to make the law harder to block — are poised to be tested in the courts.

Abortion rights advocates have promised to challenge the new law, which they consider one of the most extreme across the country and the strictest in Texas since the landmark Roe v. Wade decision.

"This is an all-out assault on reproductive health by @GregAbbott_TX and Republicans in the Texas legislature," Texas Democratic Julian Castro tweeted. "We must vigorously defend these rights in court, and hold every lawmaker who supported this effort accountable at the ballot box."

The law takes effect in September, according to the Texas Tribune.

This is an all-out assault on reproductive health by @GregAbbott_TX and Republicans in the Texas legislature.

We must vigorously defend these rights in court, and hold every lawmaker who supported this effort accountable at the ballot box. https://t.co/8PL7BKqS1t

The Legislature "worked together on a bipartisan basis to pass a bill that I'm about to sign that ensures that the life of every unborn child who has a heartbeat will be saved from the ravages of abortion," Abbott said, in a livestream posted on Facebook.

RELATED: 'Chilling effect on our judicial system' | Legal expert weighs in on abortion bill in Texas

The governor’s signature comes just after the U.S. Supreme Court said it would hear a case concerning a Mississippi law that would ban most abortions after 15 weeks, and which could lead to new limits on abortion rights. It is the first major abortion case heard before the court's newly expanded conservative majority, and could have far-reaching effects for Texas, where a pending bill would outlaw nearly all abortions if the Supreme Court overruled Roe v. Wade.

The heartbeat bill is now LAW in the Lone Star State.

This bill ensures the life of every unborn child with a heartbeat will be saved from the ravages of abortion.

Thank you @SenBryanHughes, @ShelbySlawson, & #txlege for fighting for the lives of the unborn in Texas. pic.twitter.com/aolhUKM9tv

Senate Bill 8 was a top priority for Republican lawmakers, nearly all of whom signed on as an author or sponsor of the measure.

The bill bans abortions after a fetal heartbeat has been detected. It includes cases where the woman was impregnated as a result of rape or incest. There is an exception for medical emergencies.

Similar “heartbeat” bills have been passed by other states and held up by the courts, but Texas’ version has a twist.

Instead of having the government enforce the law, the bill instead turns the reins over to private citizens — who are newly empowered to sue abortion providers or anyone who helps someone get an abortion after a fetal heartbeat has been detected. The person would not have to be connected to someone who had an abortion or to a provider to sue.

KHOU Legal expert Carmen Roe said the law will have a "chilling effect" on the state's legal system by flooding the courts with frivolous lawsuits.

Proponents of the new law hope to get around the legal challenges that have tied up abortion restrictions in the courts for years. While abortion providers typically sue the state to stop a restrictive abortion law from taking effect, there’s no state official enforcing Senate Bill 8 — so there’s no one to sue, the bill’s proponents say.

“It’s a very unique law and it’s a very clever law,” said Josh Blackman, a constitutional law professor at South Texas College of Law Houston. “Planned Parenthood can’t go to court and sue Attorney General [Ken] Paxton like they usually would because he has no role in enforcing the statute. They have to basically sit and wait to be sued.”

Legal experts have been divided on the strategy, and abortion rights advocates have said they plan to fight regardless.

Elisabeth Smith, chief counsel at the Center for Reproductive Rights, which has represented abortion providers who have sued Texas, said it and other abortion rights organizations are “not going to let this six-week ban go unchallenged.”

Drucilla Tigner, policy and advocacy strategist of the American Civil Liberties Union of Texas, said the “governor’s swipe of a pen can’t change the Constitution.”

This story is from our news partners at the Texas Tribune.