Attorney Matt Manning is representing the young man who he says was tased Halloween night Manning, says they've learned that there were at least six victims. 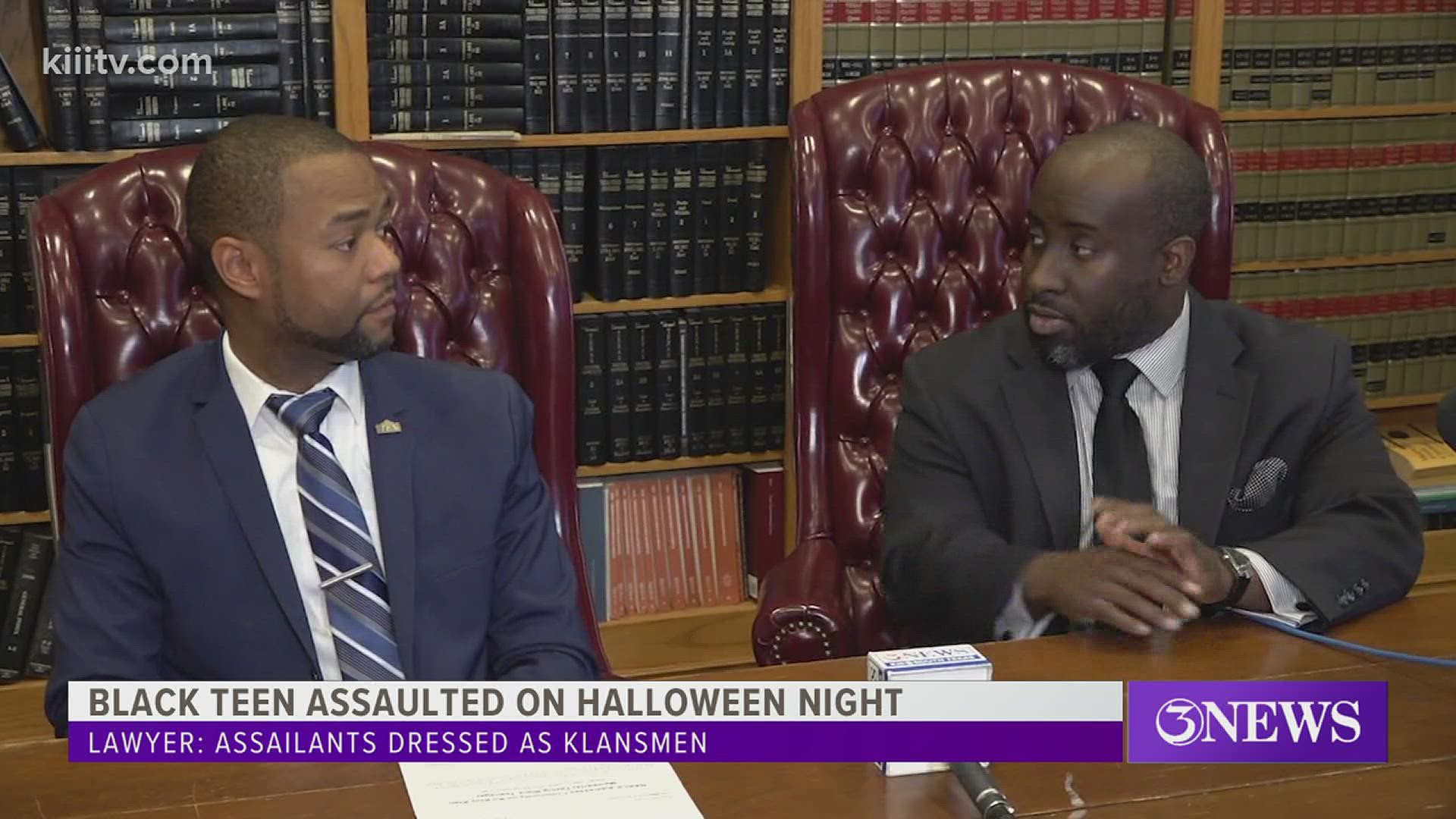 Manning said his client, a black teenager, was hit with a taser, or taser-like device, by a group of students dressed as members of the Ku Klux Klan on Oct. 31.

Manning, in a statement on Facebook, said he was "infuriated because I learned, from multiple sources, that another, even younger victim was terrorized by these depraved menaces that same night."

Manning says everyone involved are minors which is why their identities can’t be released.

"We want to do our ethical duty and make sure that we follow the Texas family code which prescribes that juveniles in criminal cases have confidentiality as it relates to their records," said Manning.

Manning shared that these three minors are involved in extra-curriculars within the Woodsboro ISD.

Officials with the district said they are aware that a group of students allegedly dressed in "garb associated with a widely known racial hate group" on Halloween and antagonized another classmate. The district released the following statement below.

Woodsboro ISD said in their statement that they will "continue to cooperate with law enforcement during the criminal investigation," but they say they cannot discipline the students for the conduct since it occurred off-campus.

According to Manning, by law the actions of using a taser means these students can face serious consequences.

"I represent one victim who was in fact tased by a taser, or taser-like weapon, which we know constitutes aggravated assault under the penal code in the state of Texas which is a second-degree felony because that is a deadly weapon," said Manning.

Manning says since those involved are all minors, things play out differently than if the incident involved adults.

"With juveniles there are times they can be placed in alternative placements outside of their homes in lockdown facilities that are not quite jail, but nonetheless don't give them the freedom to go and come as they please,” said Manning.

"But there are also times where juveniles can be punished very harshly in terms of getting what's called a 'determinate sentence', which is kind of a hybrid between a sentence when they're a young person and when they become an adult, and there are also probation and other measures that can be implemented.”

As of now, this is being investigated by law enforcement officials including the Texas Rangers.

"What we have done is consistently provided the information that has been provided to us to them in the purpose of aiding their investigation," said Manning.

The President of the NAACP Corpus Christi Chapter was also at Wednesday’s press conference with Manning.

"The NAACP and its officers are calling this press conference and I'm just going to be real clear, we are calling this a hate crime until we get further notification of something different," said Coleman.

“NAACP has a historic standing as one of the oldest civil rights organizations not to always blatantly point the finger, but say listen, this is what it is, this is what we're trying to achieve,” said Coleman.

As the investigation continues, Manning is calling on the community to provide any information or videos to law enforcement that could help in this investigation.

"We want to make sure everyone knows we stand committed to making sure this young man and all others who were terrorized by this group get justice period, and the way we do that is by calling it out," said Manning.

This is a developing story. Stay with 3News for updates.

Want to send us a news tip?

Put your name and contact information below so we can get in touch with you about your story should we have questions or need more information. We realize some stories are sensitive in nature. Let us know if you'd like to remain anonymous.

If you do not have a photo/video to submit, just click "OK" to skip that prompt.

For the latest updates on coronavirus in the Coastal Bend, click here.