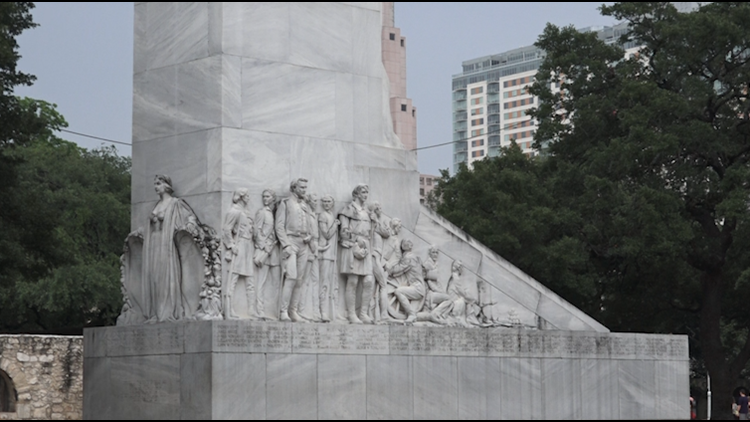 A portion of the current Alamo Master Plan includes restoration and relocation of the cenotaph. But a state Senate bill would affect all the process for all changes to monuments, memorials and dedications across the state.
Author: Erica Zucco
Published: 7:27 PM CDT May 9, 2019
Updated: 12:16 PM CDT May 10, 2019

SAN ANTONIO — The Alamo Master Plan hopes to convey a more comprehensive, historically accurate picture of the 1836 Alamo Battlefield. But planners say a bill in the legislature could affect their current plans.

State Senate Bill 1663 prevents removing, relocating or altering any statues any monuments, memorials or dedications across Texas. In order to make an changes to monuments 25 years old or older, it would require 2/3rds legislative approval.

State Senator Brandon Creighton said he grew up visiting monuments and memorials in parks, learning about Texas history, heritage and culture. He said it's critical to preserve them as they are.

The bill includes cenotaphs- and planners say it could affect plans to restore and relocate the cenotaph at the Alamo. The plans say there is structural damage in need of repair, and that there are names missing from the cenotaph that should be added. It also aims to move the cenotaph to make the entire plaza what planners say is more historically accurate.

"This really is about local control, about our voice here in San Antonio, us telling our story, we did this in collaboration with the General Land Office, state of Texas, Alamo endowment," District 1 Councilman Roberto Treviño said. "We had hundreds of meetings, we had the citizen advisory committee, and we knew there would be ongoing discussions."

State Senator Creighton said he wants to see the Alamo's story told respectfully, but doesn't want the cenotaph moved from where it was first dedicated.

"To make sure we protect it, keep it in place right where it is, and that we respect the wishes of families of the fallen heroes," State Senator Creighton said.

Councilman Treviño said the goal is not to get rid of or change the meaning of the cenotaph in any way. "We want to clear up any confusion- we’re not removing the cenotaph, we’re relocating it so we can tell a comprehensive story at the Alamo," he said.

The bill would still need to clear the House and get signed by the Governor to go into effect.