The governor said those same practices include wearing a mask. 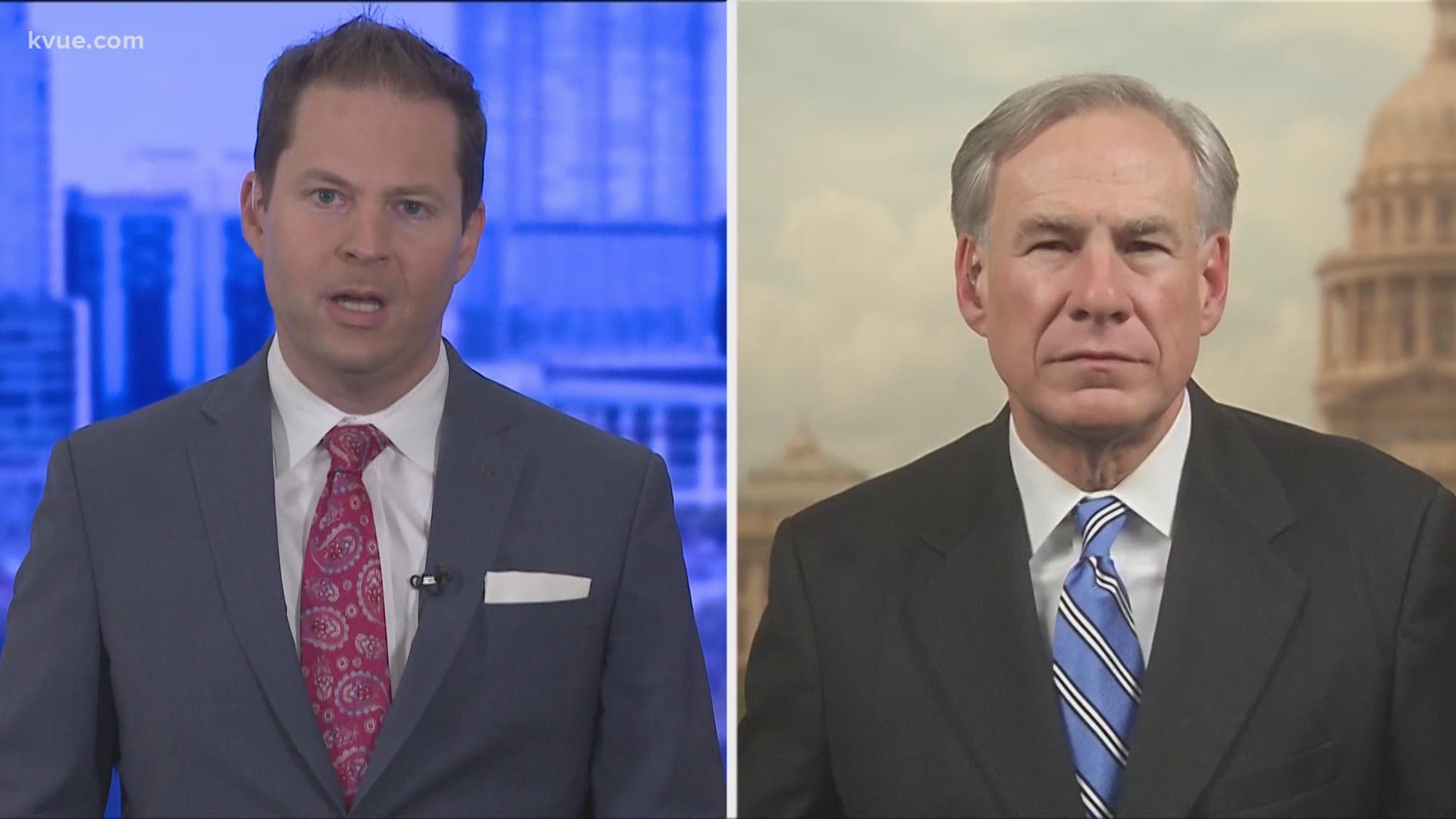 AUSTIN, Texas — Despite his announcement this week that he will be lifting COVID-19 safety restrictions across the state of Texas, Gov. Greg Abbott on Thursday told KVUE that he is still urging Texans to continue following the same safety precautions as before.

Gov. Abbott first announced the statewide mask mandate on July 2, meaning Texans were required to wear masks in public for a total of about eight months during the pandemic, which began in the state in March 2020.

Despite Abbott's new order, many businesses in Austin are still requiring masks. Here's a growing list.

The governor has also been under fire, along with other politicians and leaders, for his handling of the Texas winter storm. Millions were left without power and, in the aftermath of the storm, many were also without clean water.

Gov. Abbott joined KVUE and the Austin American-Statesman to field questions about masks, business capacity and the winter storm on Thursday evening. Here's a full transcript of the interview:

Some say that getting rid of your mask mandate was done to simply deflect, to change the subject from the power crisis. I want to ask you what you see as the public health benefit, or the benefit at all, from removing that mask mandate?

Sure. Let me explain the full answer to your question. So you'll know, the original strategy was going to be to make this announcement on the last Monday in February. That got delayed because shipments of vaccines got delayed. The decision was based upon certain medical metrics, which included primarily the percentage of seniors who were going to be vaccinated by the time the opening occurred. We wanted it to be at or above 50%, and it will be. But we had to delay the announcement a week in order to make sure that we met that metric.

Similarly, and related to that, involves the total number of vaccines that were available across the state. We will be over 7 million vaccine shots by the time the executive order goes into effect.

As it concerns the mandate, and remember this, as many local officials have wrung their hands in frustration, there has been no enforcement mechanism for the existing mask mandate, which still exists as we speak right now. And so what was required is just that everybody followed the best standard. And so what we've had, Tony, is this: Texans across the entire state have had 12 months to learn the safe best practices, which does include wearing a mask to make sure that you prevent the spread of COVID. We continue to urge Texans to do that. Because Texans know that best standard, they don't need government telling them what to do. They did last March when they may not have known what was going on, but they don't now because everybody knows and has made up their own mind about what they're going to do.

That said, one last point about this, and that is that, as you know, every different type of business, enterprise and schools, etc., they all have the choice about whether or not masks will or will not be required. And we urge everybody to follow the rules. In fact, what I personally urge everybody to do is to continue to follow the same practices. We want everyone to continue to follow the skills and the practices that you have mastered over the past six or 12 months. Doing that plus getting a vaccine shot will get us past this really quickly.

I know that this has been widely discussed today, but there's still a lot of disclarity around who specifically you talked to in the medical community, particularly among the infectious disease doctors and what exactly they advised you.

Sure. And I'll be happy to make very clear exactly how the process occurred is, as you might imagine, I was working on this issue while also working on the issue of dealing with the storm-based issue. And we had a working team in the governor's office that included the chief of staff, the deputy chief of staff and Dr. John Zerwas. Dr. John Zerwas is the vice chancellor for the University of Texas health system, and so he and he's been one of the advisers the entire way. And those three, they were in constant contact, daily contact with Dr. [John] Hellerstedt, who is the commissioner of the State Department of Health Services. And they would all discuss all of these metrics that I was just talking to you about and saying, 'Well, how does this metric look?' or, 'How does that data point look?' and talk about that, as well as other messaging. And I actually receive feedback from Dr. Hellerstedt, through my team, that I inserted into my remarks, as well as into the executive order, to make sure that things that he requested, that Dr. Hellerstedt requested, were contained both in the executive order as well as my remarks.

But are you saying at this point that those doctors endorse the removal of the mask mandate?

I can tell you that Dr. John Zerwas did, and what I can tell you is that I included in my remarks things that were requested by Dr. Hellerstedt, and that is exactly what I'm telling you right now – and that is that there was a time when maybe a state mandate was necessary, but at this particular time, with Texans having already mastered the skillset of knowing exactly what to do and how to respond about wearing a mask, etc., but also equally importantly, now that we are at a point in time where, for one, we have been able to administer the number of vaccines that we have, but most importantly, we've administered so many vaccines to the senior population.

And then, what I don't think I mentioned to you earlier, the fact that the hospitalizations and the positivity rate are going the right way. So today we have the lowest number of hospitalizations that we've had since mid-October, and we've had the lowest positivity rate that we've had since mid-October. If those numbers and if those data points were not going in those directions, this would have turned out to be completely different and the decision would not have been made.

Governor, with regard to the blackout, locally here in Travis County, the district attorney has opened a criminal investigation. What is your response to that?

Well, I'm not familiar with the criminal investigation. What I do know, of course, is what the legislature is doing, and that is they are getting to the bottom of this and we have to learn exactly what the cause of this was and that we need to remedy that cause. And I can assure you this, and everybody watching, and that is we're not going to end this legislative session until we get the results that are needed to make sure this never happens again.

In a letter to the State today, an independent monitor said a pricing error resulted in $16 billion overcharges for wholesale electricity during the freeze. Are you familiar with this letter that the State received today?

I'm not, other than to say this. And that is, I am familiar with the fact that there are issues about all the pricing and the charges, and I also am familiar with the fact when talking to Sen. and Chairman Kelly Hancock ... he's the chairman of the Business and Commerce Committee in the Texas Senate, they were having hearings today on issues like that concerning the economic effects about the freeze disaster. And so I have no doubt that's one of the issues that they are investigating today.

List: Businesses in Austin that are still requiring masks