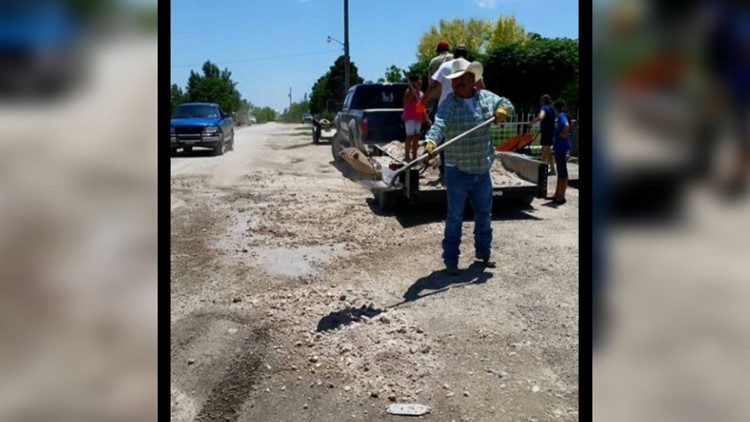 Residents of Big Lake Take Fixing Potholes Into Their Own Hands

There's a big pothole problem in Big Lake causing some residents to take matters into their own hands. One family posted a photo on Facebook showing them filling the potholes themselves.
Author:
Published: 10:17 PM CDT May 18, 2015
Updated: 12:32 PM CDT July 25, 2018
By: Zora AsberryNewsWest 9

BIG LAKE - There's a big pothole problem in Big Lake causing some residents to take matters into their own hands. One family posted a photo on Facebook showing them filling the potholes themselves.

The city tells NewsWest 9, many of the potholes are near the railroad tracks, which the Texas Department of Transportation's jurisdiction. But because of the numerous complaints, officials are now working on a plan to fix the pothole problem.

Dora Rey, a resident of Big Lake, says that her family uses rocks and gravel to fill the potholes near their home.

"We kind of fill in the potholes every once and a while, the city does too, but they do it maybe once or twice every now and then. But in order for us to even drive out of our driveway, we fall into these potholes and our vehicles are getting damaged," said Rey.

Kyle Rockwell, the Mayor of Big Lake, says that the potholes are worse now because of the heavy traffic. He also says with the amount of rain they've received, it's been difficult to pave them.

"We've got a lot of oilfield traffic and we've got roads that weren't designed to handle that. Any time that that happens, it's going to cause some damage to the roads," said Rockwell.

Residents are glad that the city has tried to fill the potholes but they say that the city's efforts haven't lasted very long.

"We want something permanent, we want our streets paved, most of our streets are not even paved," said Rey.

Rockwell agrees that there is a pothole issue and is working actively to fix it.