Here's how people across North Texas honored the victims of 9/11, 20 years later

Here's a list of what's happening, when and where, with information from the organizers about how they're honoring the victims of 9/11. 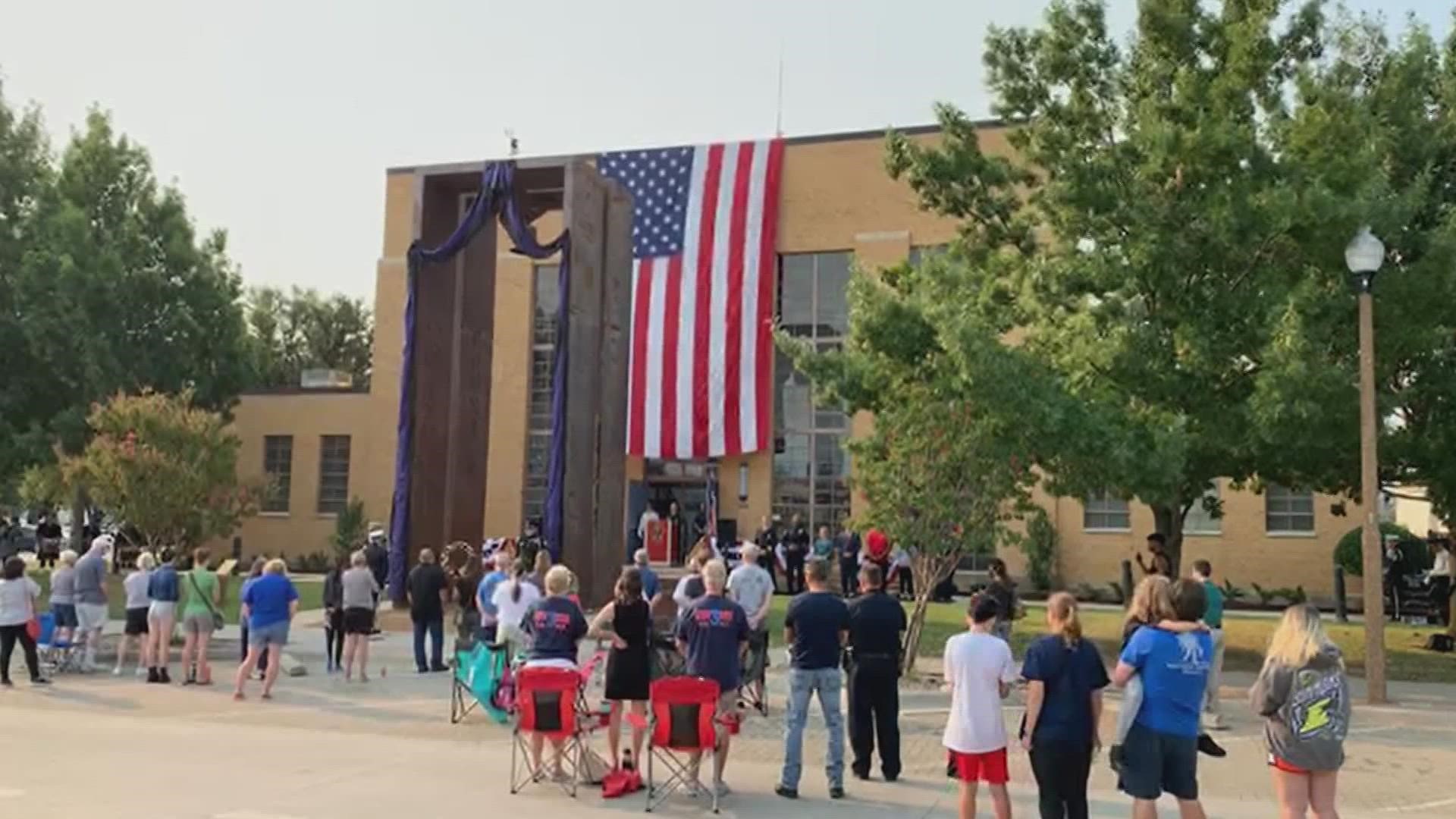 DALLAS — Twenty years have passed since one of the darkest days in U.S. history.

On the 20th anniversary of 9/11, people all across North Texas came together honor and remember the victims, survivors, and heroes of 9/11.

In Dallas, volunteers with the Communities Foundation of Texas gathered to help their neighbors in need. Together, they packed 200,000 meals for the North Texas Food Bank.

Monica Egert Smith, senior vice president of the Communities Foundation of Texas said the goal was to do good on an anniversary that is such a solemn remembrance.

“We wanna [sic] change the tone to all the sadness that happened on that day 20 years ago to make it a day of doing good while also reflecting and making our community a better place,” said Smith.

During a 9/11 Memorial event in Grapevine, Beverly Bass, the first-ever female captain with American Airlines shared words of remembrance.

“This is an event that will remain a part of our history forever,” said Bass.

Her plane was among the dozens that were diverted to a small town in Canada on Sept. 11, 2001. She became the inspiration for the Broadway musical, Come From Away.

“It is a day that represents reflection, pain, scars, and more importantly, healing,” Bass said. “In the face of tragedy, violence and pure evil…there was still goodness in the world.”

Here's a list of events that happened throughout North Texas:

What: Milestone, the local home service company, is providing their Technicians and Team Members with paid time out of their workday to remember that day and honor all who lost their lives through a 110 story Stair Climb at the Texas Rangers' historical stadium. For each team member who participates, Milestone is contributing $100 to buying lunch for first responders in the area.

Why: Milestone's 9/11 Memorial Stair Climb is a way Milestone feels they can remember that day, extend an arm of condolence and support to those affected, and honor those first responders who made the ultimate sacrifice. All participants will climb 2,071 steps; the equivalent of 110 stories. 9/11/01 will forever serve as the most poignant example and a reminder of what only few are willing to do for all: live and give their lives in the service of others.

Milestone proudly supports the military and first responders who serve and protect our community with honor and excellence. Additionally, hiring U.S. veterans and providing paid training to aid their entrance back into the workforce is at the heart of the company.

Who: More than 150 registered volunteers

What: Carry The Load and the National Cemetery Administration, a Department of the VA are hosting a National Day of Service at 65 national cemeteries across the country, including DFW National Cemetery.

To honor our men and women buried in VA national cemeteries and commemorate the heroism of September 11, 2001, volunteers will be beautifying sacred grounds and cleaning headstones of the fallen.

What: The public is invited to the second of two public forums held in remembrance and reflection of the 20th Anniversary of Sept. 11.

The forums are presented by the Dallas Bar Association's Public Forum Committee and co-sponsored by the World Affairs Council. Those interested can register for the Zoom here.

RELATED: Biden to mark 20th anniversary of 9/11 at 3 memorial sites

Where: Thanks-Giving Square in downtown Dallas

What: In recognition of the upcoming 20th anniversary of the 9/11 attacks on our nation, Thanks-Giving Square in Downtown Dallas will be open during normal hours and is available to the community as a place to convene individually or collectively.

Who: American Airlines crewmembers invite uniformed flights attendants and pilots from all airlines

What: Uniformed flight crewmembers will walk from Liberty Park to the 9/11 memorial prior to the ceremony starting. This is open to any and all uniformed airline personnel.

What: The city of Grapevine will host a remembrance ceremony that will also be livestreamed on the city's Facebook page.

Where: City of Denton Fire Department

What: Denton police and fire will be observing the 20th anniversary of the September 11th, 2001, terrorist attacks on our country. The event is open to the public.

What:  At 7:46 a.m., the moment the first plane hit the World Trade Center, emergency lights will be turned on and remain on for twenty hours, marking twenty years since the attack. The City will place a wreath at the memorial, and residents and visitors are encouraged to pay their respects throughout the day. The square will be silent during the duration of the memorial.

Where: Olde City Park in Wylie

What: In honor of the 20th anniversary of September 11 and as part of the commitment to the communities it serves, Credit Union of Texas (CUTX) has donated specially created 9/11 helmet shields for each member of the City of Wylie Fire Department. The helmet shields commemorate the 343 first responders lost on 9/11 and have been worn by the department every day throughout 2021.

In its effort named "Never Forget", the City of Wylie Fire Department will host a memorial ceremony and a documentary showing on Saturday, September 11 at Olde City Park in Wylie.

The memorial ceremony begins at 8 a.m. and will feature guest speaker, Darin Kinder, discussing his first-hand account of 9/11.

Where: In remembrance of the 20th anniversary, residents are asked to display flags in and outside their homes and observe a moment of silence at 7:46 a.m. local time, Saturday, Sept. 11. On Sept. 11, 2001 at 8:46 a.m. Eastern Daylight Time, the first plane struck the north tower of the World Trade Center.

What: The City of Mesquite will host a sunrise memorial to commemorate Patriot Day which is the anniversary of the September 11, 2001 terrorist attacks.

Where: Children's Health Stadium in Prosper

What: A special 20th Anniversary 9/11 Ceremony put on by the Town of Prosper in partnership with the Prosper Independent School District at Children's Health Stadium at 9 a.m. The annual Carter BloodCare blood drive will also be on-site collecting blood donations before and after the ceremony.

What: The city of Benbrook will host a remembrance ceremony featuring Congresswoman Kay Granger, as well as Texas state senator and 9/11 survivor Brian Birdwell, who was inside the Pentagon during the attacks. Ceremony organizer will also have a special gift for all first responders, active and retired military, and veterans who attend.

How to get Lee Greenwood tickets or sponsor tickets for first responders:

• Step One: Visit levittpavilionarlington.org and purchase a batch of tickets to be donated to first responders/healthcare workers.

• Step Two: Following your purchase, email info@levittarlington.org and let the Levitt know how you want your tickets to be distributed. (For example: "Please donate a batch of 10 tickets to the Arlington Fire Department.")

To purchase tickets for the Greenwood show: Visit levittpavilionarlington.org.

General seating tickets are $25, reserved seating is $45 (plus service fees.) A $5 discount is available for service members and first responders purchasing tickets for themselves. Due to anticipated high attendance, guests are encouraged to purchase sooner rather than later.

Note that lawn chairs and coolers are not permitted for any ticketed Levitt Pavilion Arlington event, including the Greenwood concert. Instead, chairs will be provided for each ticket holder, and concessions are available on site. Proceeds from the Greenwood show will benefit the Levitt's free concert series, which offers 50 free outdoor live music shows in a range of genres each year; as well as the Levitt's "Share The Stage" initiative, which funds performing opportunities for North Texas artists.

What: The Dallas Symphony Orchestra (DSO) will hold a concert on Saturday, September 11, 2021, that will remember the devastating attacks of September 11, 2001, on the twentieth anniversary. Tickets for the event are $10 with proceeds benefitting Carry The Load, the Dallas-based non-profit organization that provides an active way to connect Americans to the sacrifices made daily by our military, veterans, first responders and their families. Information and tickets are available at dallassymphony.org

Guest Conductor Leonard Slatkin will lead the DSO in American music that honors and reflects upon the American spirit and pays respect to the legacy of those who have given their lives.

RELATED: Granbury VFW plans to feed every first responder in Hood County in honor of 20th anniversary of 9/11