The president discusses his plan for "revitalization and recovery" before attending a private fundraiser. 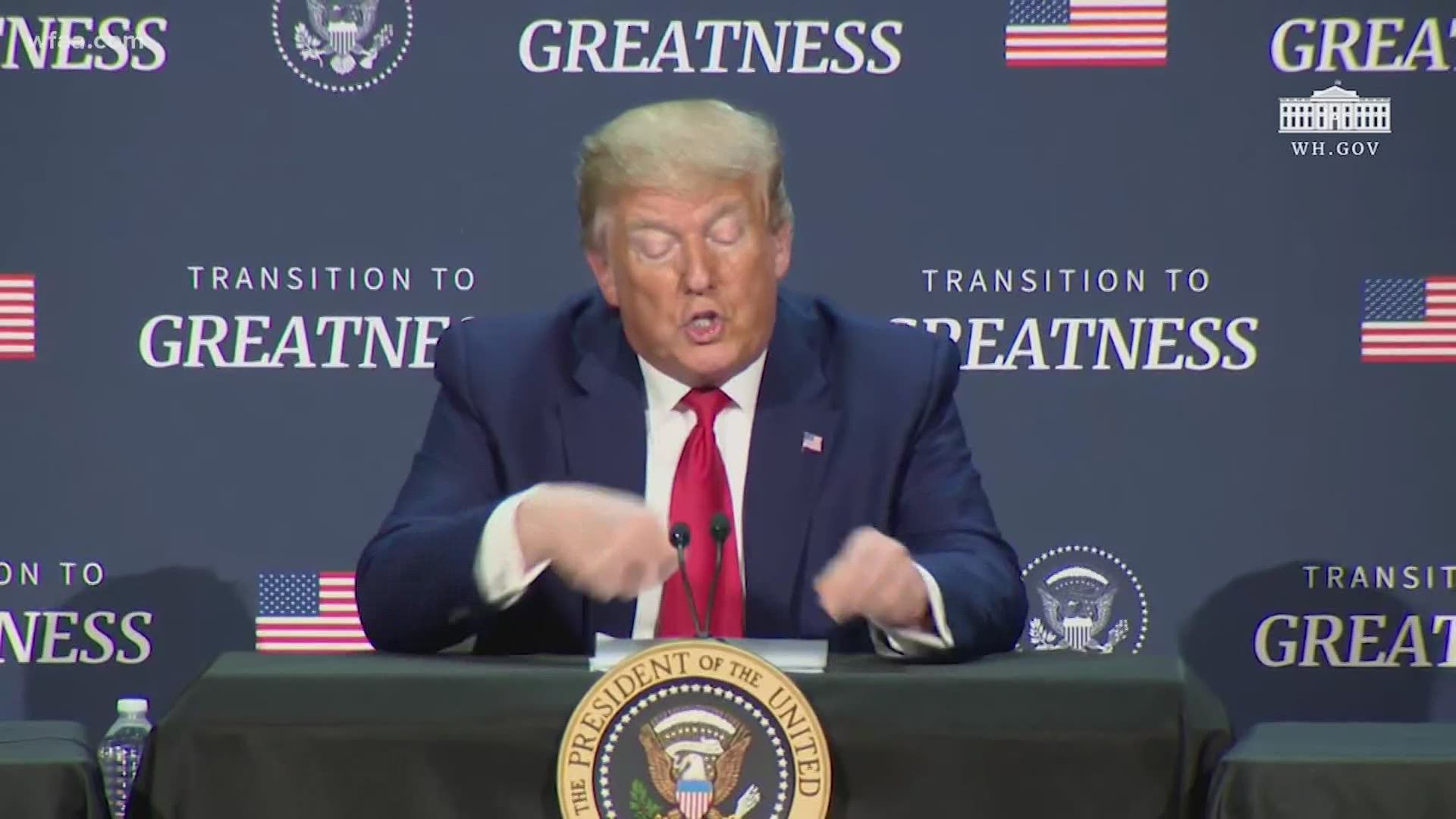 This story will be continuously updated.

President Donald Trump announced his administration's plan for "holistic revitalization and recovery" in response to protests demanding police reforms in the wake of George Floyd's death.

Trump landed shortly before 3 p.m. Thursday to attend a roundtable discussion at the Gateway Church in North Dallas. An estimated 650 people attended the event, which wrapped up at about 4:30 p.m. Trump headed to a private campaign fundraiser ahead of his evening departure from Dallas.

When the president arrived to the discussion, he said touted the importance of "law and order," saying it's unlikely what's happening in Seattle would happen in Dallas.

RELATED: Trump tells Seattle 'Take back your city NOW' or 'I will'

For more than two weeks, protesters have called for systemic changes to address racism in the United States after the death of Floyd.

Floyd died while in police custody on May 25, with a bystander video capturing him calling for help. The 46-year-old black man was held under the knee of a white police officer for 8 minutes, 46 seconds.

Among the reforms protesters want is the defunding of police, which means to move money from law enforcement budgets into other social programs.

Trump said he does not support that.

"We're not defunding police. If anything we're going the other route," he said. "We're going to have stronger police forces because that's what you need."

The president said he wants to see more investment in police training.

He also said that officers have faced violence during protests.

"They got shot for no reason whatsoever other than they're wearing blue," Trump said.

"We need training," said Glenn Heights police Chief Vernell Dooley. "This is not the time to defund police departments. If an organization or business is struggling to become better, this is not a time to withhold resources. You provide them."

The chief he supports the standardization of policies and hiring practices in police departments nationwide.

Dooley also said he supports a national consensus on use of force policies for law enforcement agencies, including a database of incidents when force is used by police.

As part of those measures, Dooley said there should be the creation of a database to track officers who have been fired or decertified, so that they don't get hired by another agency.

"We need to get those bad apples out of our industry," Dooley said. 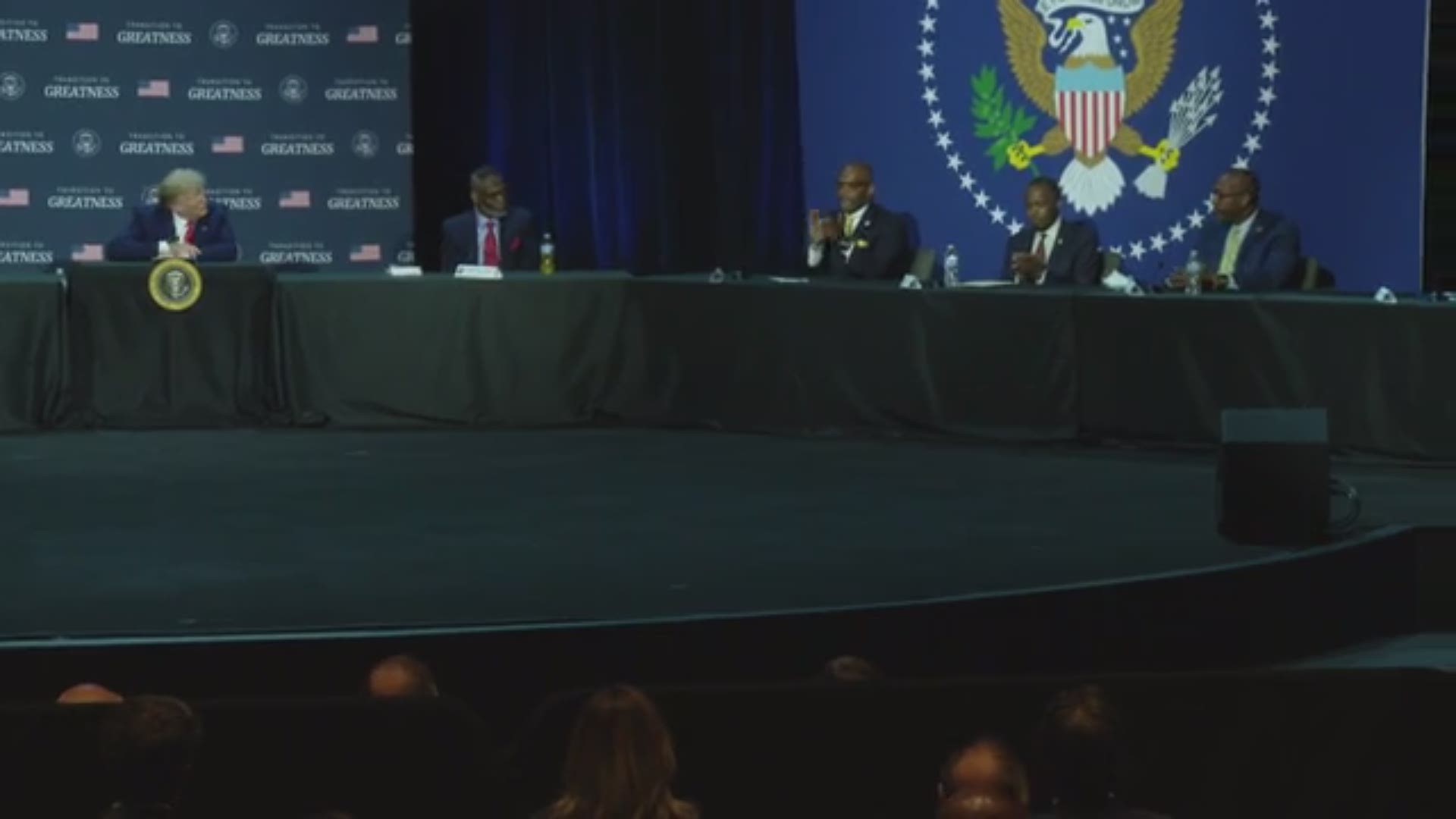 There were 14 people with the president to "discuss solutions to historic economic, health and justice disparities in American communities," according to a senior White House official.

Adams discussed the country's fight against the COVID-19 pandemic and thanked Texas for what has been done.

"We flattened the curve, but that doesn't mean that COVID-19 isn't still here," Adams said.

On Wednesday, Texas reported its record high for hospitalizations. On Thursday, Dallas County reported the county's highest number of cases.

Gov. Greg Abbott and Lt. Gov. Dan Patrick were among the group at Dallas Love Field to greet Trump.

Ahead of Trump's arrival, protesters and supporters gathered outside Gateway Church.

Trump was already scheduled to visit the city Thursday for a private fundraising event with about 25 attendees and an admission price of $580,600 per couple.

He is scheduled to leave the city at 7 p.m.