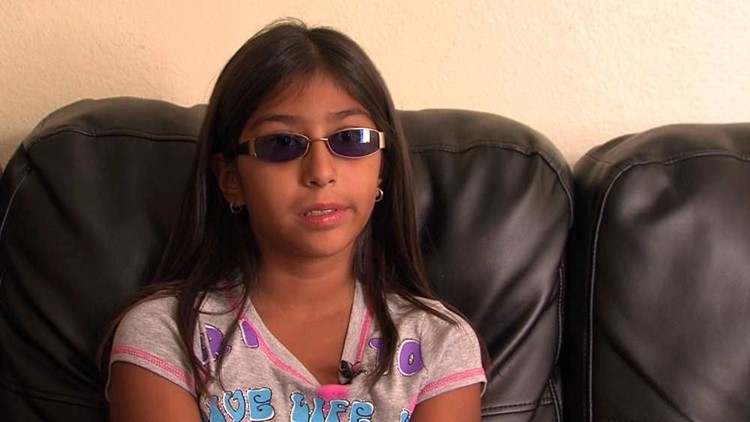 Noveah Sanchez has a rare eye condition called Irlen Syndrome. Unlike some forms of dyslexia where words can move off the page, for her, everything she sees is constantly moving.
Author:
Published: 9:44 PM CDT August 8, 2013
Updated: 5:47 AM CDT July 21, 2018

MONAHANS - Noveah Sanchez, a local Monahans girl, is like any other fifth grader but she is having to overcome battles most kids will never face. Noveah has a rare eye condition called Irlen Syndrome. Unlike some forms of dyslexia where words can move off the page, for her, everything she sees is constantly moving.

"She sees everything 3D, she doesn't see, it's not just her reading, it's her whole world moving on her," Aurora Sanchez, Noveah's mother, said.

"I would turn around and it would look like the kids where coming at me, 'I would ask were you just coming towards me' and they would say 'no I was sitting in my seat the whole time'" Noveah said.

The Sanchez family took a trip to see a doctor in Dallas and thankfully they finally figured out what was going on.

"When we went and got her tested in Dallas, seeing her expression, when she got the tint and actually got to see the world the way we see it, it broke my heart," Aurora said.

The glasses Noveah wears are called chromagen lenses. To most people it turns everything you see blue,  but for Noveah, it makes her world normal.

"I can read fast, not like fast, fast but I can read better than I was," Noveah said.

Thanks to her glasses, she is now excelling in school.

"Her grades and seeing her expression, 'Mom I made the A honor roll' or 'Mom, I made the B honor roll. She's doing what she wants and isn't struggling anymore," Aurora said.

Noveah hopes that her experience will encourage other kids to speak up.

"Don't be embarrassed because some people have it, it's a part of life," Noveah said.