Brad Harrison died in November, leaving behind a wife, young children and a hockey dad legacy. 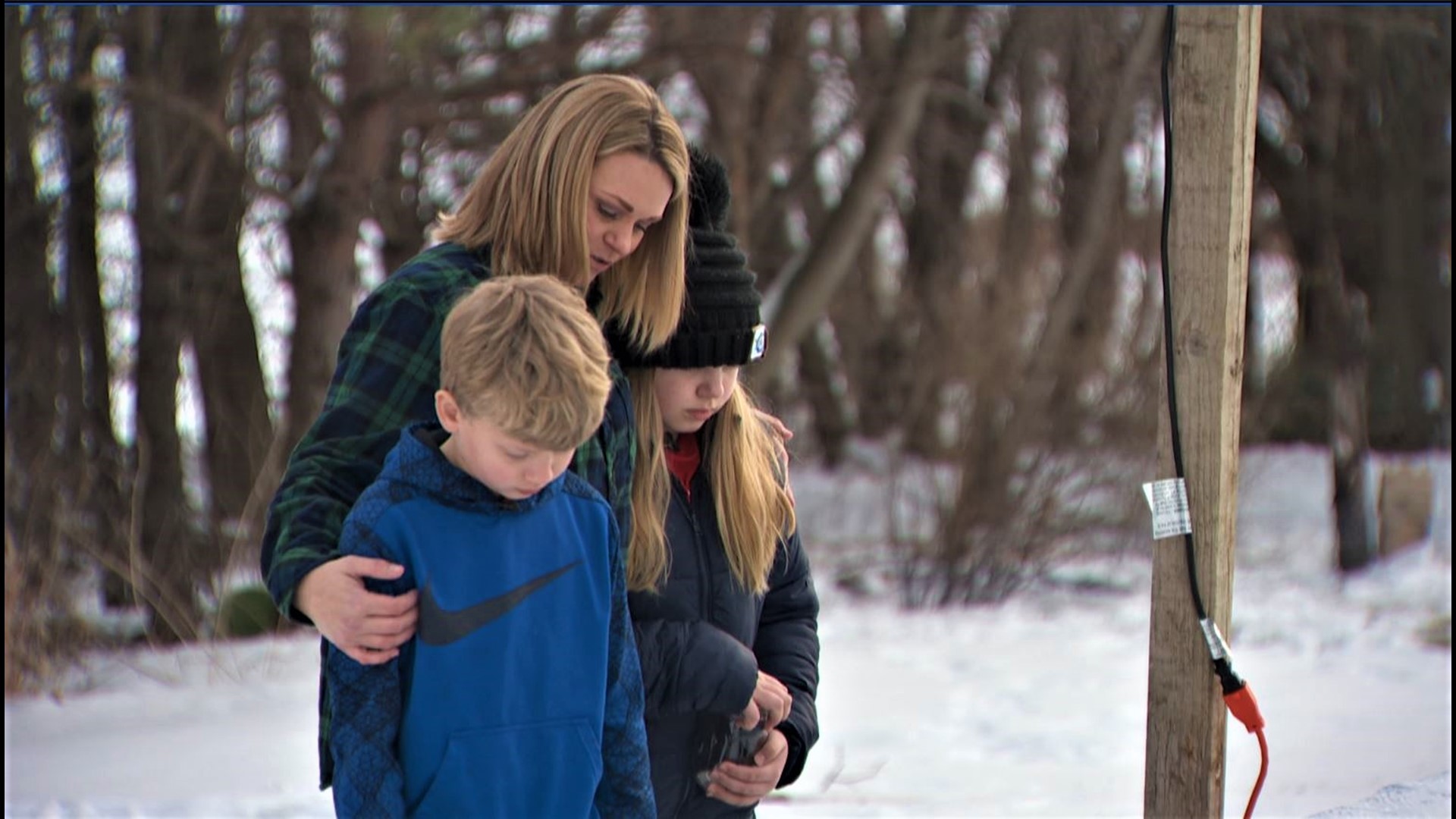 FOLEY, Minn. — Brad Harrison lived for the backyard hockey rink he built each winter for his family.

So, it only seemed fitting to Brad’s wife and kids that his ashes be scattered there too.

“It was a way to keep Brad with the kids for a little bit longer,” Beth Harrison, Brad’s wife, says.

Beth is now the unlikely caretaker of the rink her husband dutifully maintained each winter.

The wife who hadn’t even wanted the rink, now grips a garden hose on a freezing January night, applying a hot water spray to the ice, something she picked up watching YouTube instructional videos.

Beth never pictured herself in this position.

Brad, on the other hand, loved the notion of spending time on the rink with his three kids, 9-year-old Beckham, 11-year-old Ailee and 21-year-old Kayla.

Always for his kids – whether Brad was building a winter luge course or hosting outdoor movie nights in the Harrison’s backyard.

Then, just over a year ago, the high school hockey player turned hockey coach and hockey dad, learned the idyllic life he’d built for himself and his family was crumbling.

But unlike Beth, Brad was in a battle he couldn’t win.

The couple spent last summer at a lakeside campsite making memories with Beckham and Ailee, before sharing with them what fall would bring.

“We just held them and tried to answer their questions, but it was the hardest thing I've ever had to do,” Beth says, wiping away tears.

In a video left for his family, Brad shed his own tears when he said “I hope they can be okay with me being gone and I just worry a lot that it's going to be hard.”

The Harrison’s hockey friends asked if there was anything they could do.

“The only thing I couldn't do myself was this rink,” Beth recalls telling them.

It’s all she needed to say.

On Nov. 1, they arrived at the Harrison’s home, studied Brad's hand-drawn blueprints, and assembled his rink.

“We're a tight-knit group, us hockey families,” Kayleigh McGinnis, the organizer of the rink-build, said.

Twelve days before he died at age 48, and barely able to get to his bedroom window, Brad looked out and saw love.

His rink would be there for his family, even if he couldn’t be.

A few weeks later, Beth stood at the far end of the rink with her arms around Beckham and Ailee.

“We know that he loved to play hockey and he loved to skate with you guys,” she told her children.

Credit: KARE
Ailee Harrison gets a hug from her mother, Beth Harrison

Then, they took turns scattering Brad’s ashes along the boards, just outside the rink

It was, after all, where Brad always wanted to be.

“This was his accomplishment,” Beth says. “It was a way to spend tons of time with the kids.”

On a recent night, it was Beth who could be found with a goalie stick in front of the net as her kids and their friends took shots.

Credit: KARE
Beth Harrison tends the goal while her children Beth (far left) and Beckham battle for the puck. Their friend Tatum McGinnis looks on.

The night was crisp, the lights burned bright, and the ice was mostly smooth and even.

EDITOR'S NOTE: Beth Harrison has shared her experiences during her husband's battle with cancer, as well as her own, in a blog. You'll find it by clicking here.