COVID-19 killed them, but officers’ families say state is delaying their line of duty death benefits

Lawmakers in Austin are considering a legislative fix, but families say they need help now. 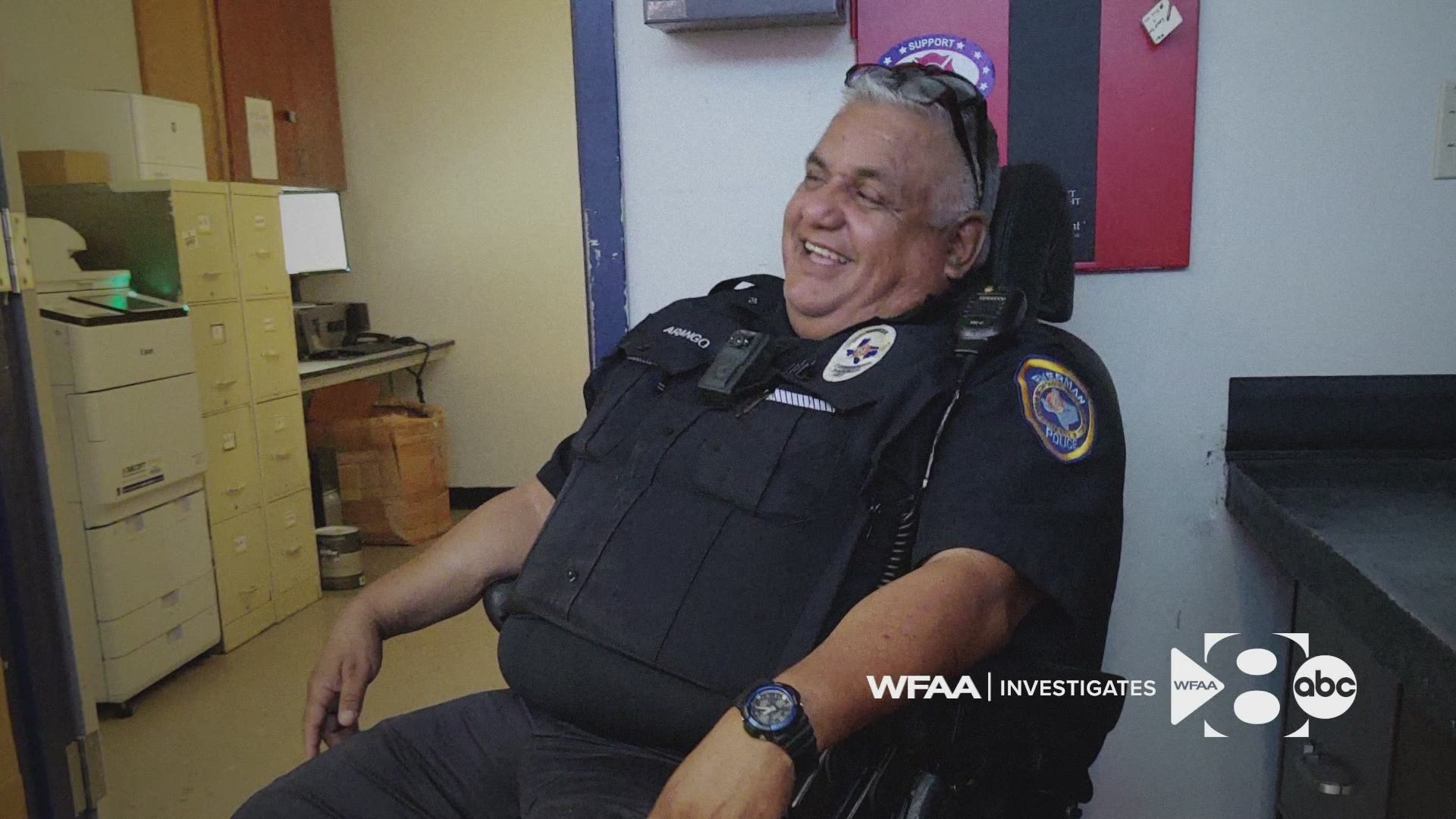 DALLAS — Officer Alex Arango was affectionately known as the “Law Dog” around Everman. He patrolled the streets of the small Tarrant County community for 27 years.

“To him, it wasn't just a job, it was truly a calling,” Everman Police Chief Craig Spencer said.

But the chief said an invisible killer claimed Arango’s life in the line of duty.

This past October, Arango responded to a domestic disturbance at a home in Everman. When he arrived, he heard yelling and screaming and found a man assaulting a woman. Arango scuffled with the man, only to then learn that he had COVID-19.

Arango was wearing a mask during the call, Chief Spencer said. But within days, the 60-year-old married father of three tested positive for COVID-19. His 81-year-old mother also caught the virus. Both were hospitalized and died within three days of each other.

Spencer has no doubt that Arango contracted COVID-19 on the job.

Arango is one of more than 80 state and local law enforcement and correctional officers to die from COVID-19 since the beginning of the pandemic last year, according to the Combined Law Enforcement Associations of Texas, or CLEAT.

The Employee Retirement System of Texas, which oversees the line of duty benefits process, told WFAA that privacy rules prevent it from commenting on who has or hasn’t been approved. However, a spokeswoman with the Texas Commission on Law Enforcement said ERS officials informed it that two state prison correctional officers have been approved.

That means dozens of families are caught in a bureaucratic maze fighting for what they believe they’re owed.

"We have been working with these families since the beginning of the pandemic to ensure that they and their families receive the benefits they're entitled to," said CLEAT spokeswoman Jennifer Szimanski.

Spencer is still waiting to see if Arango’s family will be approved for line of duty death benefits.

“It’s the right thing to do,” the chief said. “You know this wouldn’t even be a question if it were any other circumstance that he had died in the line of duty.”

In most cases, families cannot pinpoint the exact moment their loved ones got exposed to COVID-19.

But the likelihood they got it at work is high.

“The week he got sick, five or six other people in his office were sick,” said Rachel Vega, the widow of Lynn County Sheriff Abraham Vega.

After Sheriff Vega tested positive for COVID-19, his condition rapidly worsened, his wife said. She drove her 48-year-old husband to a Lubbock hospital on their second anniversary. On the car ride there, she said they barely spoke, fearing the worst.

He got sicker and was flown by medical helicopter to Dallas. He died July 11.

Vega’s workers’ compensation benefit claim has been denied. His wife is appealing.

His wife is also awaiting a decision on line of duty death benefits.

State Sen. Beverly Powell, a Burleson Democrat, has filed legislation that would presume that first responders who get sick or die from COVID-19 contracted it on the job.

“They’re the first people who come in contact with folks who have COVID-19,” she said.

“They should expect that, that their government officials are going to make sure that we take care of this problem,” she said.

Powell, whose district includes Everman, recently met with Arango’s family and presented them a flag that had flown over the state capital.

Her bill would ensure that future pandemics are also covered, too.

Locally, there have been a number of law officers to die of COVID-19. Among them is Collin County Sheriff’s detention officer Joseph Quillen.

The 19-year department veteran worked in the booking area of the jail, and his family and the sheriff’s department believes he contracted COVID-19 there.

His wife, Melissa Quillen, said her husband was the family’s sole source of income as she had quit her a job a few months before he died. She said that she, her son, and the son’s girlfriend, who lives with them, all caught the virus.

“We got so sick, and he just got worse,” she said.

Joseph Quillen was admitted to the hospital, but his condition continued to worsen, leaving his wife to make the difficult decision to remove him from life support.

“I just basically told him I was there for him and I didn’t want him to suffer,” she said.

Melissa is appealing the denial of his workers’ compensation claim. She said that she is grateful to the sheriff’s office for helping her through the difficult process of fighting for benefits.

“There’s days that I just can’t even get out of bed,” she said. “It’s very difficult on the family to have to go through all this struggle and appeal and fight it. It shouldn’t be that way.”

In Harris County, Michelle Brown and her four children – the youngest two being 11 and 16 -- are also fighting for what they say they deserve.

Her husband, Mark Brown, was an investigator with the Harris County Precinct 5 Constable’s office. When the COVID-19 crisis began last spring, Michelle and the kids stayed home.

“He had to go to work because he was a breadwinner and not only that, that's just who he was,” she said. “He didn't he didn't think twice about it.”

Around the first of May, her husband of 22 years began to get sick. She also got COVID-19, as did one of their sons.

But her husband got progressively worse and ended up hospitalized. During 59 days in the intensive care unit, his kidneys failed, his lungs collapsed twice and he was put on a ventilator.

In her last conversation she had with him, she said he looked and her and said, “’I’m going to be OK, right?’ I’m like, ‘You better be OK.’”

When it was clear he would not survive, Michelle decided to bring him home on hospice care. His fellow deputies lined up outside his home – silently saluting in honor – as paramedics unloaded him from the ambulance.

In his final hours, his children, wife and mother stood vigil at his bedside. Michelle cut his hair, trimmed his fingernails and gave him a sponge bath. As her husband neared death, Michelle says she wrapped her arms around him, told him they would be okay, that he was much loved and she was proud to have been his wife. Then he stopped breathing.

“There's not a word strong enough for how difficult it is to watch your favorite person in the world slip away from you,” she says.

Every morning when he went to work, she would say to him, “'Hey, Brown come home to me.’ He would look at me with his big old grin and say, ‘Always.’”

Got a tip? Email teiserer@wfaa.com.