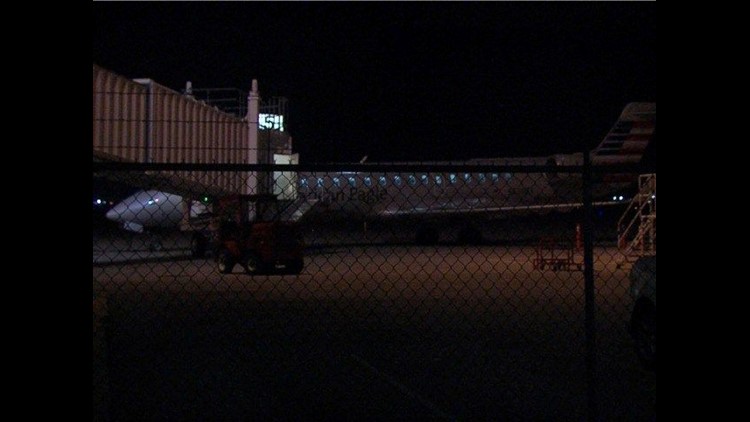 Hospital Officials: Passenger Aboard Flight That Landed in Midland Does Not Have Ebola

In a press release to NewsWest 9, Midland Memorial Hospital and the CDC have confirmed that the passenger on board a flight from Dallas that landed at Midland International Air and Space Port does not have the Ebola virus.
Author:
Published: 6:15 AM CDT October 8, 2014
Updated: 1:25 PM CDT July 2, 2018
Staff Report
NewsWest 9

UPDATE: In a press release to NewsWest 9, Midland Memorial Hospital and the CDC have confirmed that the passenger on board a flight from Dallas that landed at Midland International Air and Space Port does not have the Ebola virus:

"After full medical and physical evaluation, it has been determined by medical staff and CDC officials that the patient transferred from Midland International Airport due to illness early Wednesday morning, does not have the Ebola virus. As a reminder, the 2 primary cues that would suggest the potential for this virus are a fever at or above 101.5 degrees Fahrenheit and recent travel to an endemic area where several Ebola cases have been confirmed. Over the course of this event, the patient in question never had a fever nor have they traveled to or from an endemic region.

At approximately 11:05pm on Tuesday, October 7th, an American Airlines pilot dispatched the City of Midland Fire Department to advise them that on their regularly planned, red-eye flight from Dallas to Midland, they had a passenger experiencing a medical condition that may need attention upon landing. The passenger had reportedly been vomiting in flight. Due to the recent, widespread media coverage regarding the Ebola virus, the pilot alluded to the fact that several other passengers on board were concerned Ebola could be the cause. At that time, the City of Midland, Health Department and Fire Department officials all responded to Midland International Airport with full infectious disease precautions in place in the event that the passengers' concerns were valid. Upon arrival, a full medical evaluation was conducted by EMS and after instruction by CDC officials, it was determined that it was highly unlikely this passenger had Ebola. As a further precaution, the passenger in question was still transferred to Midland Memorial Hospital where they were admitted through a controlled access, specially designed entrance directly into an isolation room. They were also assigned one dedicated nurse who did further medical testing, including blood draws, throat swabs and other physical evaluations. The patient was then evaluated by an Emergency Department Physician who also consulted with CDC officials regarding the case. Based on the physician's assessment and the CDC recommendation, Ebola was completely ruled out as potential cause. The patient will be kept under 24 hour observation by a dedicated nurse as a standard protocol.

All other passengers on the flight were also evaluated and released based on no evidence of questionable medical conditions. Although City, Health Department and Hospital officials have been routinely trained and were fully prepared to manage the potential occurrence of an infectious disease, we are fortunate that the possibility of an Ebola infection in this case, has been ruled out."