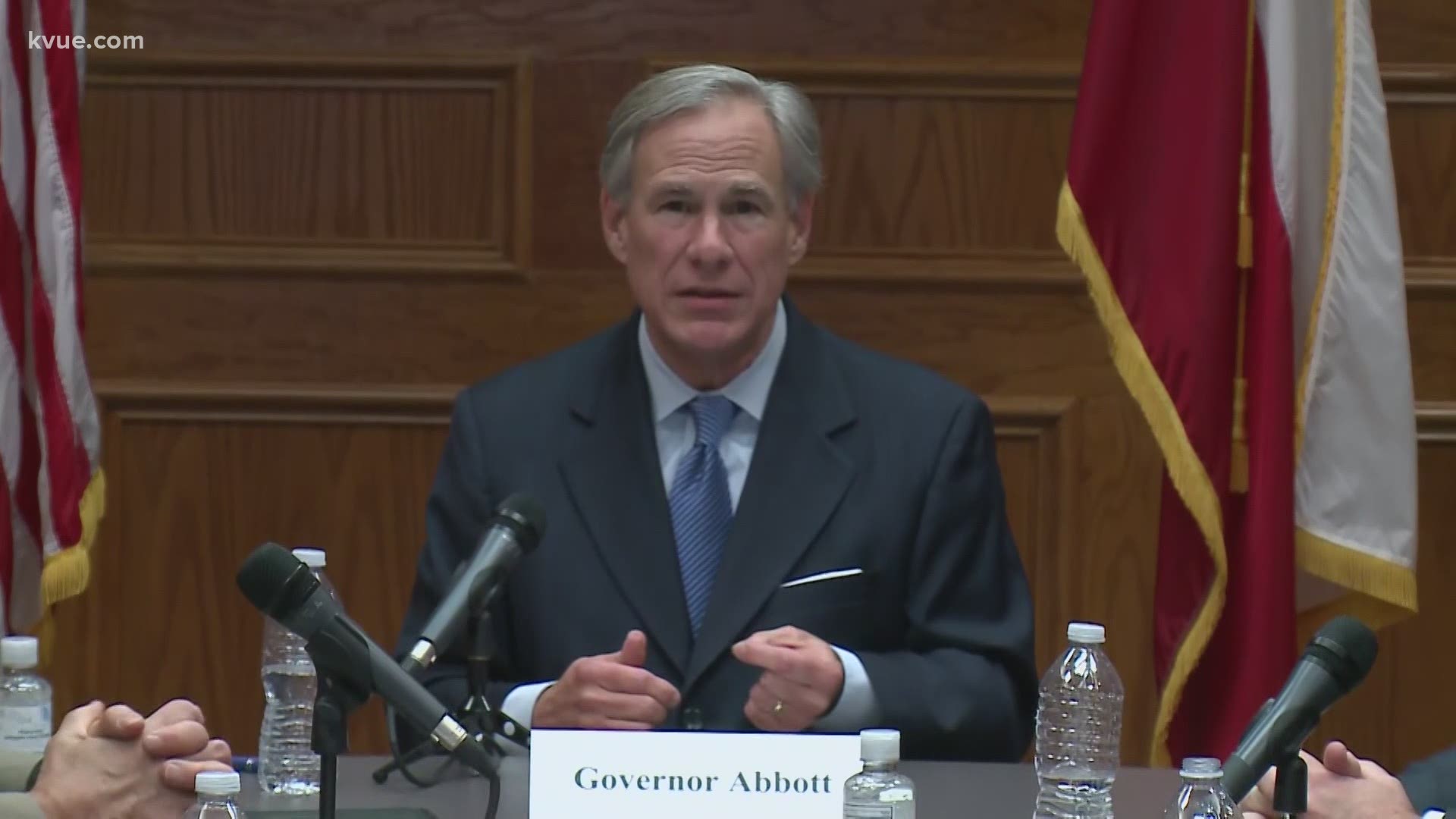 AUSTIN, Texas — Gov. Greg Abbott held a roundtable event with law enforcement leaders from across the state on Thursday to lay out his public safety priorities for the 87th Legislative Session.

He started the press conference expressing gratitude to law enforcement across Texas.

"These brave men and women ... they put their lives on the line every single day to keep Texans safe," Abbott said. "And, unfortunately all too often, sometimes pay the ultimate sacrifice in fulfilling their duties."

Abbott said it is shocking that some cities are "turning their backs" on law enforcement officers.

"In Texas, we do not turn our backs on our law enforcement officers," Abbott said. "Texas is a law-and-order state, and we are going to ensure that we keep it that way."

One way the governor plans to do that is to fiscally punish cities, namely Austin, for cutting funding to police departments.

"Defunding the police is reckless. It endangers the lives of people in communities across the entire state. We cannot, and we will not, allow cities like Austin to defund the police," Abbott said.

The Austin City Council voted on Aug. 13, 2020, to chop $150 million from the Austin Police Department's budget, roughly 34% of the department's proposed $434 million budget. Nearly a fifth of that extra money, $21 million, will go toward things such as violence prevention and permanent housing services.

Gov. Abbott immediately criticized the move and proposed freezing property tax rates for cities that cut police budgets. He also suggested a possible state takeover of the APD. On Thursday, he suggested something else.

"This session, Texas must pass laws that give cities a clear choice, either fulfill their duty to keep their residents safe or lose access to all of their tax revenue," Abbott told reporters.

Notably missing from the roundtable was any representative from the APD or the city, but Gov. Abbott said he's talked with APD Chief Brian Manley several times about the council's action.

"We just made it clear that what they have done with regard to defunding police is unacceptable and we will make it fiscally impossible for them to continue to defund police in Austin," Abbott added.

Austin Mayor Steve Adler told KVUE Austin is a safe city and he's committed to keeping it that way. But to do that, cities need flexibility.

"Public safety involves more than just police," Adler said. "And we have to figure out in our community what works to make us even safer than we are now. That has to be our constant push."

A bill like the governor described hasn't been filed yet, but it is expected.

"The Texas Department of Public Safety Trooper Damon Allen was shot and killed during a traffic stop," Abbott said. "His accused killer was out on bail when he should have been behind bars."

Last legislative session, The Damon Allen Act was passed in the House but didn't make it out of the Senate.

Gov. Abbott said he wants to see the bill achieve the following:

Abbott added that he fully supports training reform and additional funding for training.

Thursday’s event was held at the Texas Department of Public Safety Headquarters with the following law enforcement leaders:

In Austin, overall crime remained relatively flat year-over-year, according to Chief Manley’s monthly crime report. Murders increased in the capital city about 45% year-over-year, from 33 in 2019 to 48 in 2020.

But that spike in murders started early in the year, before the city council voted to cut police funding in August, and well before the new, lesser budget took effect in October.

The day before a Jan. 21 media briefing, the governor tweeted that "If Austin doesn't reinstate the ban on homeless camping the state will do it for them. Contrary to what Austin leaders think no one has a right to urinate & defecate wherever they want. Homelessness promoted by Austin has also endangered public safety."