In the video, Arbery explains he's just trying to sit in his car and rap. The officer responds saying that they get a lot of gang and drug activity in that area. 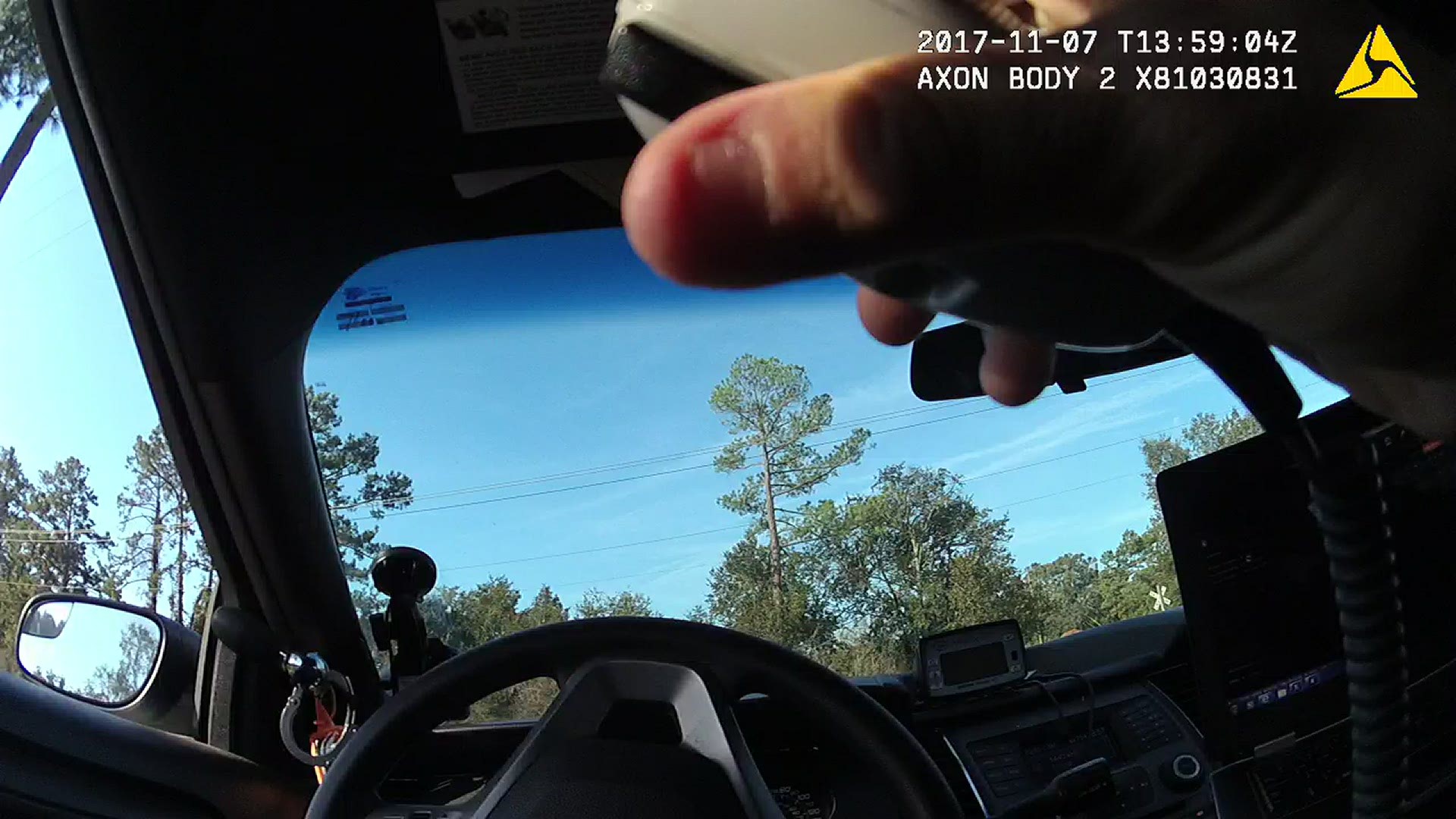 New bodycam video obtained by First Coast News Tuesday shows police in Georgia attempting to tase Ahmaud Arbery’s during a confrontation back in 2017.

The November 7 video shows Arbery appearing to refuse Glynn County Police when they asked to search his car after being questioned. As he walks back towards his car he says to the two officers: "You can't go in my car.... you can't go in my s****."

One of the officers then yells “keep your hands out your pockets” and attempts to fire a taser at Arbery but it doesn't work. Arbery is then told to get down on the ground and complies.

A second officer says that Arbery had already been checked for weapons.

In the video, Arbery explains he was trying to sit in his car and rap. The officer responds saying that they get a lot of gang and drug activity in that area.

In a statement from attorneys for Ahmaud Arbery's family, they say the video clearly depicts a situation where Ahmaud was harassed by Glynn County police officers, and they say this type of behavior is well-documented.

According to an AP report, officers said Arbery was free to go but could not take his vehicle because his license was suspended.

"Initially, Mr. Arbery is rightfully upset by what he perceives as being approached for no legitimate reason. The officer acknowledges that he hasn't done anything wrong. Ahmaud Arbery maintains his composure, however, even when the second officer to arrive on the scene immediately escalates the situation, pulls out his taser and attempts to use it on Mr. Arbery for no justifiable reason. Ahmaud was not arrested or charged with any crime.

This appears to be just a glimpse into the kind of scrutiny Ahmaud Arbery faced not only by this police department but ultimately regular citizens like the McMichaels and their posse, pretending to be police officers.”

The Ahmaud Arbery case has trained a spotlight on Glynn County and the work of police and prosecutors in the area.

A First Coast News investigation reveals the Arbery case is just the latest in a string of cases that raised concerns about a history of toxic culture and cover-ups within Glynn County law enforcement; cover-ups that recently led to an explosive grand jury report and criminal indictment of the Glynn County Police Chief and several high ranking officers.

Gregory and Travis McMichael are charged with murder and aggravated assault in Arbery's death. A video released to the public this month shows the circumstances surrounding the shooting.

Protesters are now calling for the justice system to do its job in the investigation, which many say has taken too long to result in the arrests of both McMichael men, weeks after Arbery died.

Two months went by with no arrests when the case was in the hands of Brunswick DA Jackie Johnson and the Glynn County Police Department.

An arrest warrant states that Travis McMichael shot and killed Ahmaud Arbery, and it says that Greg McMichael, Travis’ father aided and abetted his son in the commission of this crime.

Arbery was killed Feb. 23 after a pursuit by the McMichaels, white father and son who armed themselves and gave chase after seeing the 25-year-old black man in their subdivision.

More than two months passed before they were jailed on charges of felony murder and aggravated assault.

Gregory McMichael, a retired investigator for the local district attorney, told police he thought Arbery was a burglar. He said Arbery attacked his son before he was shot.

Arbery’s mother, Wanda Cooper-Jones, has said she believes her son was out jogging.

The delay in criminal charges and a cellphone video of the shooting leaked shortly before the May 7 arrests fueled national outrage over Arbery’s death.