Where are the gas shortages in my area?

Here is how you can find gas in the area. 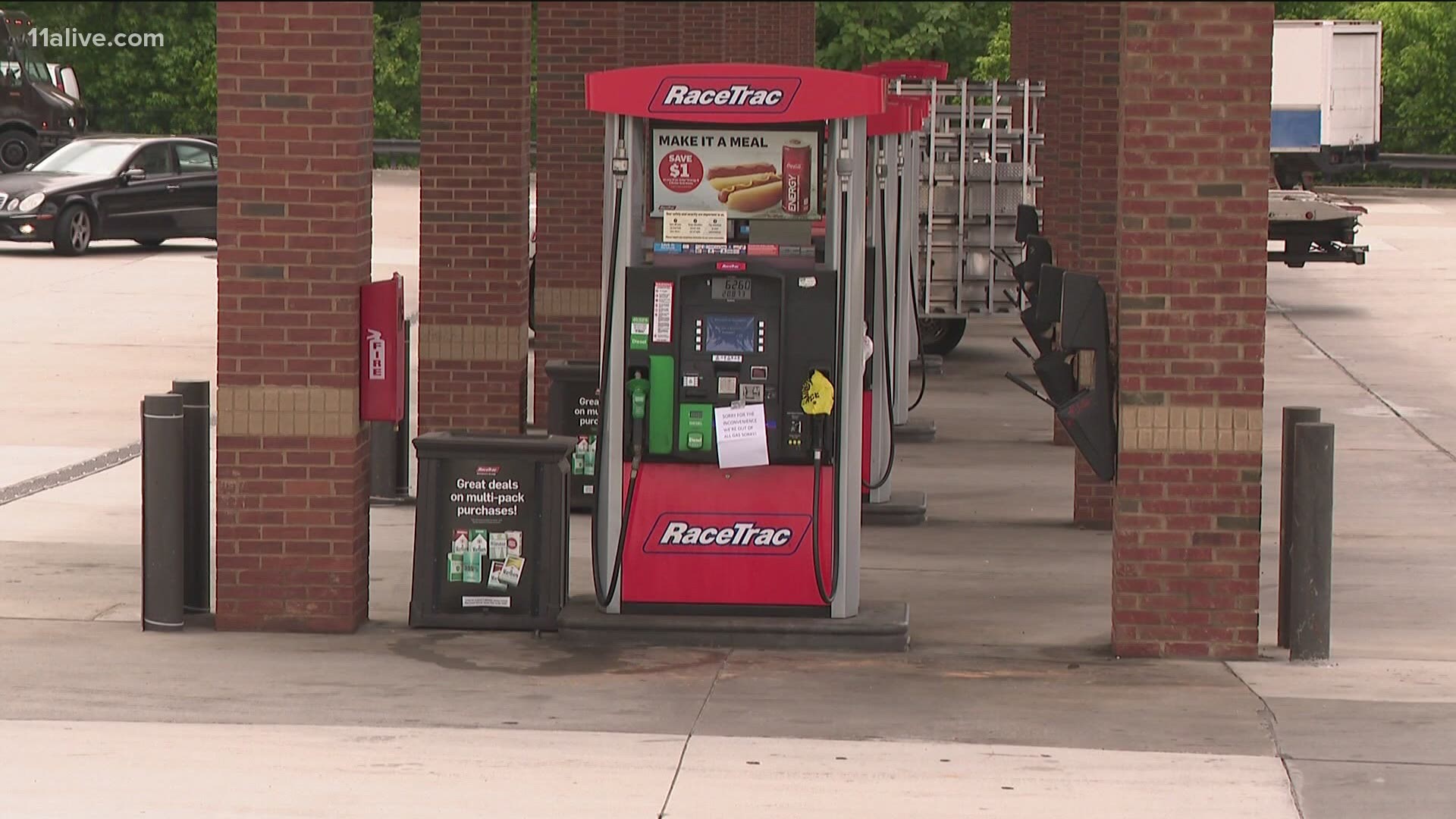 ATLANTA — Pipeline problems have continued for a Georgia-based operator and it's causing a gas shortage across the metro Atlanta area. However, on Thursday afternoon, the company said it has restarted its entire pipeline system and deliveries have resumed again in all markets.

Earlier in the day, Colonial Pipeline said it has made "substantial progress in safely restarting our pipeline system." In the 9 a.m. press release, they said fuel delivery "has commenced in a majority of the markets we service."

The company said on Wednesday it will probably take several days before all the gas pumps are pumping gas again.

"There is no need to fill up every tank that you have or hoard gasoline," Kemp said. "Don't do things you don't need to do. Do what you need to and just use good common sense."

11Alive found there are around 4,614 gas stations across the state. 49% or 2,261 gas stations are experiencing a gas shortage as of 6 a.m. on Thursday, according to data from GasBuddy.

Patrick De Haan, an analyst with GasBuddy, reported a little more than 70% of metro Atlanta stations were without gas early Thursday.

But many residents are still looking for gas and asking one question.

Where is gas available in my area?

Anyone who needs to get gas can use this Gas Buddy Tracker to find out where the shortages reportedly are. Just search for your zip code, and it will list which stations have fuel.

Updates regarding gas in certain areas are constantly changing -- so the information listed within the app may not be up to the minute updates. Some users have also told 11Alive they are having trouble with the tool not updating.

Why is the gas running out?

Colonial Pipeline, based in Alpharetta, was forced to shut down after a cyberattack. The company operates more than 5,000 miles of pipeline from Texas to New York. It's one of the largest in the country and delivers approximately 45 percent of all fuel to the east coast.

A Russian criminal group is suspected to be responsible for the ransomware attack that shut down the Colonial Pipeline.

The company released a statement on Sunday and said an investigation has been launched.

"Leading, third-party cybersecurity experts were also immediately engaged after discovering the issue and launched an investigation into the nature and scope of this incident. We have remained in contact with law enforcement and other federal agencies, including the Department of Energy who is leading the Federal Government response," the company said.

Many gas stations keep enough reserves on hand to make it through a period of shortage, but the rush of panic-buying this week emptied out those reserves.

RELATED: Why you should care about the Colonial Pipeline ransomware hack

What does this mean?

The Atlanta-Fulton County Emergency Management Agency accurately predicted that the cyberattack could potentially lead to gas shortages in the area, but also encouraged people not to panic.

As AAA hypothesized on Monday, gas prices have climbed this week in reaction to the Colonial Pipeline shutdown. However, Kemp's executive order has provided some relief to prices potentially rising through price gouging.

He said, "anyone taking advantage of this disruption and making a quick buck off the backs of Georgians will not be tolerated."

Where can I find the cheapest gas in Atlanta?

Click here to see where the lowest gas prices have been reported in Atlanta, according to GasBuddy.

Where do I report possible price gouging?

Gas price increases are expected as demand soars and supply lessens but law enforcement agencies are urging the public to report cases of unusual price gouging.

RELATED: Here's what to do if you spot price gouging at gas stations

In an updated statement on Thursday morning, the company said it had "made substantial progress in safely restarting our pipeline system and can report that product delivery has commenced in a majority of the markets we service."

A map posted with the release indicated Atlanta was among the markets where service had resumed.

The U.S. Energy Secretary, Jennifer Granholm, said on Twitter that the progress "should mean things will return to normal by the end of the weekend."

On Wednesday, Colonial Pipeline had announced it had "initiated the restart of pipeline operations" at approximately 5 p.m. The company posted a statement on its website saying it would take several days for the product delivery supply chain to return to normal.

They said some markets could still experience interruptions during the start-up period.

"Colonial will move as much gasoline, diesel, and jet fuel as is safely possible and will continue to do so until markets return to normal," the company said.

"As we initiate our return to service, our primary focus remains safety. As part of this startup process, Colonial will conduct a comprehensive series of pipeline safety assessments in compliance with all Federal pipeline safety requirements," they added.

The company has delivered fuel to Atlanta, Ga., Belton and Spartanburg, S.C., Charlotte and Greensboro, N.C., Baltimore, Md., and Woodbury and Linden N.J.

The complete Wednesday and Thursday statements are located here.

LET US KNOW >> If you spot a fuel line or a gas station running short of fuel, snap a photo and send it to 11Alive. You can upload the image using the Near Me function on the 11Alive mobile app, or by texting 404-885-7600.