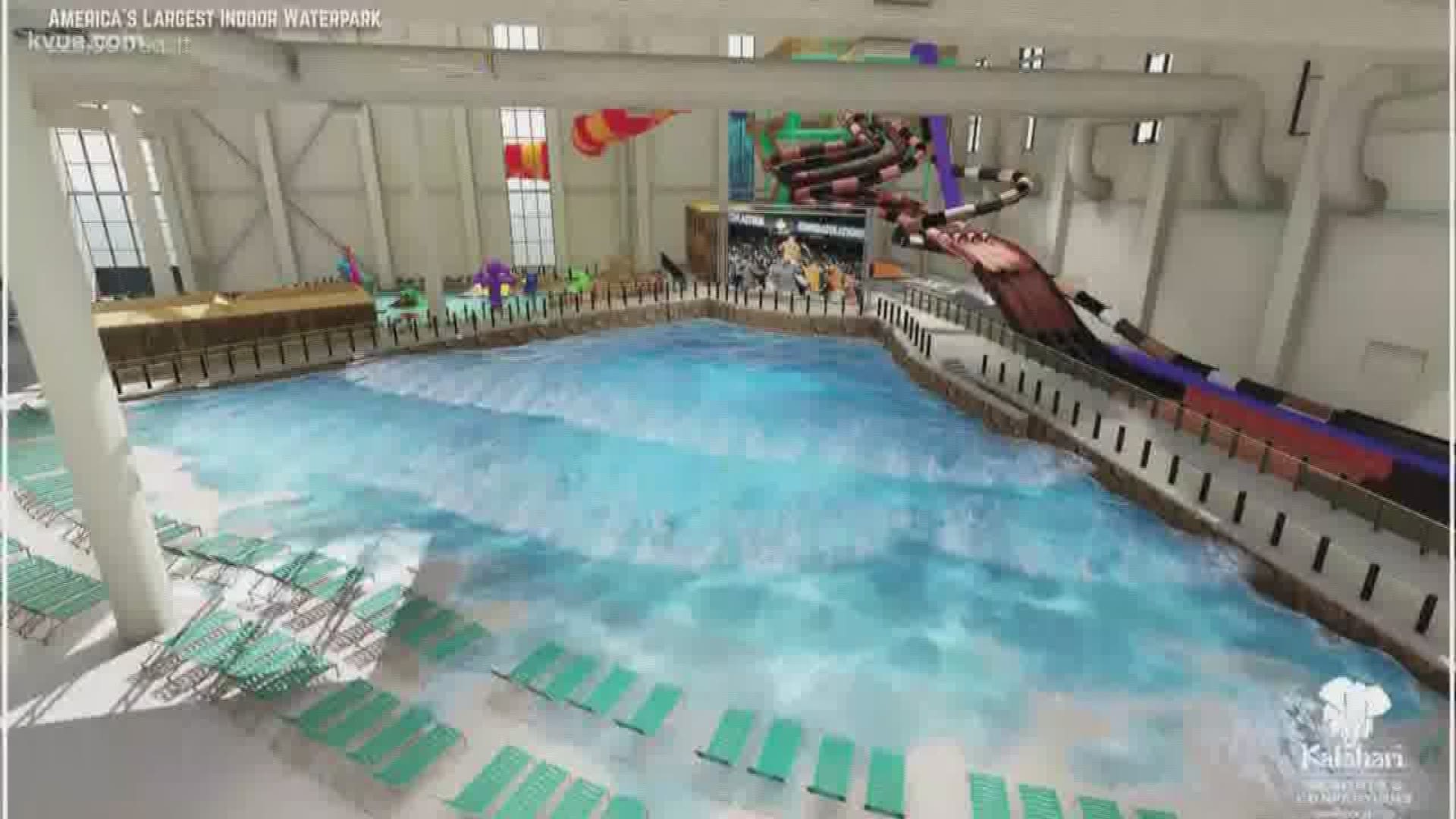 Kalahari Resorts is a company that creates resorts made up of water parks, entertainment centers and convention centers -- all in one location. Back in 2016, Kalahari struck a deal to build its fourth location in Round Rock on U.S. 79, across the street from Dell Diamond Baseball Park. The other parks are in Wisconsin, Ohio and Pennsylvania.

"We're building this thing at the magnitude that people want to get here and see it, you have over 100-degree heat, where people are trying to get out of the heat," said Todd Nelson, the President and CEO of Kalahari Resorts.

"It's definitely a game changer, puts us on the map destination wise, brings a new audience to our city, which helps our tax payers overall," said Round Rock Mayor Craig Morgan.

The company held its groundbreaking ceremony Tuesday afternoon, starting construction on what will become a 200,000 square foot park that is encompassed in 200 acres of land. The facility will hold 975 rooms and have the largest indoor waterpark in the country.

Travis Nelson is the Kalahari spokesperson and said Kalahari envisions this park as being a destination for all types of people.

"Every single part of your family can have fun," Nelson said. "If you're in a bachelor or bachelorette party, you can have a great time. If you're bringing grandma and your little kids, you're going to have a great time. Everyone has something to do inside our water parks."

While these parks are known for their prominent size, they also have an African theme and family-style lodging. The Round Rock park will cost $350 million and also be a place for other companies too.

"Business travel is an extremely important part of what we do," Nelson said. "We have 200,000 square feet of a state-of-the-art facility that hosts state association groups, corporate groups and family groups. It's a huge part of what we do, and it's going to be the best we've ever built."

"Fifty percent of our occupied rooms will come from our convention center, so we thought round rock with the proximity to Austin, with the beautiful site, right across the street from the round rock express, 355 acres, we can grow for years and years and years, and I think it's the perfect site, it's absolutely perfect for us," said Nelson.

"I think it gives the public, the citizens a lot of things to do because it is open to all the public number 1, number 2, I think more than anything it's so important to round rock to have sales tax, you can't totally depend on it, but our voters years ago voted for a half cent tax reduction, so when people come into our community, they spend money, they leave, it helps out taxpayer overall number 1 in that area, number 2 these facilities don't use a lot of our core services and so they come in and it's the easiest on the services, so it's the pursit form of economic development tourism," said Morgan.

Nelson said his team had a handful of cities to pick from for this fourth location. Once they honed in on Round Rock, Texas, though, he said it became an easy decision.

"Everything is bigger in Texas," Nelson said. "We want to be in Texas. Round Rock is a great location next to Austin. You've got Dallas, San Antonio and Houston. All right in the center of that great triangle."

The Kalahari team said they expect this facility to bring just under $5 million annually in tax revenues. If the construction process goes smoothly and as planned, the water park should be built and ready to open by Fall of 2020.

You don't have to stay at the resort to have access to the amenities like the water park. The public can go to the restaurants, or use the spa, and can buy a day pass to the indoor water park. The company hasn't released prices yet for the Round Rock location, but the passes range from $20 to $80 dollars at their other locations depending on the time or day you go.

While the park is set to be built on 200 acres of land, Kalahari purchased 350 acres of land -- meaning they have 150 acres not being used as of now. Nelson said they plan to eventually use and develop that land to make the largest indoor waterpark even bigger.