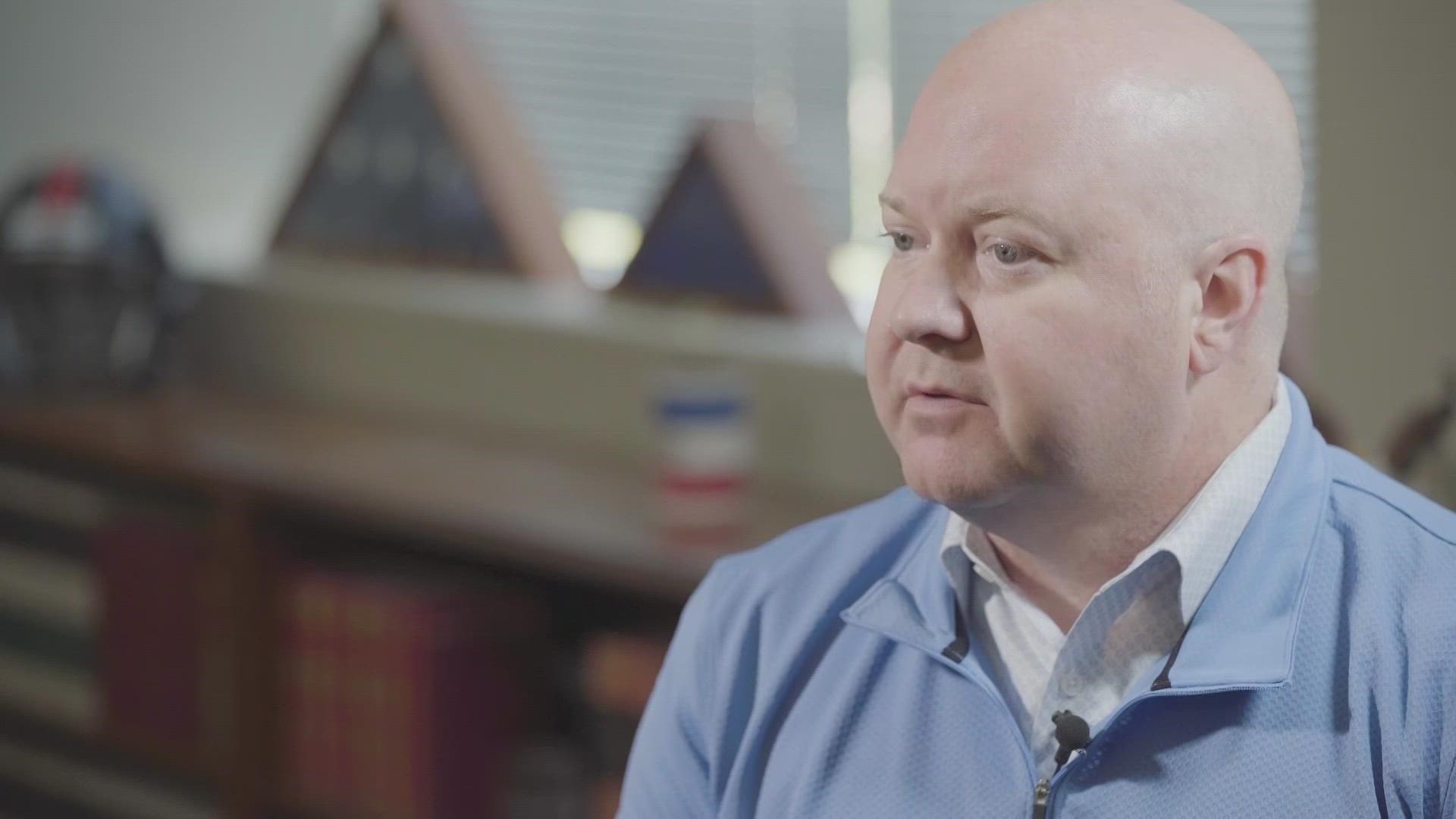 Hill and Finley went back and forth over the course of 30 minutes during a live-video-taped commissioners meeting. Finley alleged that Hill took information from the county without her knowledge as she is the district clerk, a position in charge of handling records and documents for the county.

Finley presented her budget in front of commissioners just like the rest of her county colleagues. It was Finley's final budget item that Judge Hill took umbrage with: an independent exchange server for emails and information.

"It is vital to my office that I am able to protect communication between me and my judges or my legislators or anything I do in my official capacity," Finley said. "We are sitting in a place right now telling you we've had a breach and we need to fix it," the district clerk said.

Finley is referring to many emails that were turned over to Hill, she claims, without her knowledge.

Hill immediately asked Finley to clarify her comments, especially as it relates to a "breach." WFAA has provided the exchange between the judge and district clerk for full transparency.

Finley: "There was an elected official who requested directly from the I.T. department my emails."

It is unclear at this time the nature of the emails that were requested by Hill. WFAA has sought comment from both Finley and Hill on this matter.

Hill attempts to clarify several times in the video that there was "no breach" and that the request for emails was in "accordance with law." Hill says his request was not as a member of the public and therefore not pursuant to Freedom of Information Act rules.

The Freedom of Information Act allows the public the right to request access to records from any federal agency unless the item falls under an exemption.

Hill said in the video that there are provisions that allow for a board member to request information "necessary to complete his or her task on that board." Hill said he also consulted with an attorney on the proper course of action when requesting information from a public servant.

"Why would you do something so questionable you have to get an attorney involved to get an opinion?" asked Finley.

Finley charged back saying the information in those emails are often privileged. She said the content in the emails cover topics such as A.D.A., juvenile information, Family and Medical Leave Act (FMLA), and other legal reasons that often exempt them from release.

"I've never said I don't want you to have my records. What I've said is I need to vet to make sure whatever is exempt or privileged is not given up. You are not above those exemptions or privileges," Finley directed at Hill.

"There is no provision to shield your emails from you and legislators. You're asking for us to pay for you to have your own independent exchange server...because you want to be special," said Hill.

Again, WFAA is not privy to the content of the emails that were ultimately put onto a thumb drive by the I.T. department and given to Judge Hill.

In the video, there is mention of a letter drafted by Hill in 2020 that are apparently "allegations" against the department and Finley. Hill says in the video the letter addressed the district clerk's "behavior in office." Finley took the letter to believe it was a recommendation for her removal from office.

One of the allegations that Hill mentioned in the meeting, and apparently in the letter, was that Finley had long absences and was away from the county campus during the pandemic. Hill appears to have gleaned this information from the times Finley's badge was accessed to enter the building.

"The report demonstrated you were not on campus for six entire months, not one time," said Hill. "Your employees were still here working. You were not to be found and that frustrated me to no end," the judge said.

The judge clarified and wrote in the letter it was not a commentary on whether the district clerk was working, but rather her attendance.

WFAA is not aware of the full reasoning behind the absences outside of it being a pandemic where mask rules and gathering restrictions were in place for a short period of time in Collin County.

It was a near 30 minute exchange between district clerk and the judge that caught many people WFAA spoke with off-guard. One source who did not want to be named told WFAA that the private spat was "bubbling beneath the surface" for a while.

The following statement was provided to WFAA by District Clerk Lynne Finley:

"As the District Clerk of Collin County, I am the legal custodian of all records for the District Courts. I am the only elected official responsible for ensuring the security and integrity of the records of the District Courts. The records under my care include not only pleadings, Court orders, and Jury verdicts, but also emails and communications. The Citizens of the State of Texas, acting through their legislators, have passed laws that legally require certain documents to be withheld from public disclosure. For example, juvenile records, adoption records, and certain communications between Judges, Court staff and attorneys may not be subject to release, or may be sealed by the Courts. As the elected District Clerk of Collin County, I have a statutory and constitutional duty to protect those records from public disclosure.

"Chris Hill, the Collin County Judge, on one or more occasions, improperly seized documents and emails under my care, custody and control, without my knowledge or consent, by improperly accessing the email servers used by the Office of the District Clerk. When Judge Hill's misconduct was discovered, both the Office of the District Clerk, and the Collin County IT Department notified him in writing that his conduct was inappropriate and in violation of State and Federal law. Despite repeated warnings, Judge Hill improperly seized a significant number of protected communications and documents on one or more occasions.

"In an effort to protect the documents in my custody from further misappropriation, I requested that the Collin County Commissioners Court provide me with a budget to obtain an independent email server for the Office of the District Clerk. I am informed by the budget department that my request is 'not recommended.'