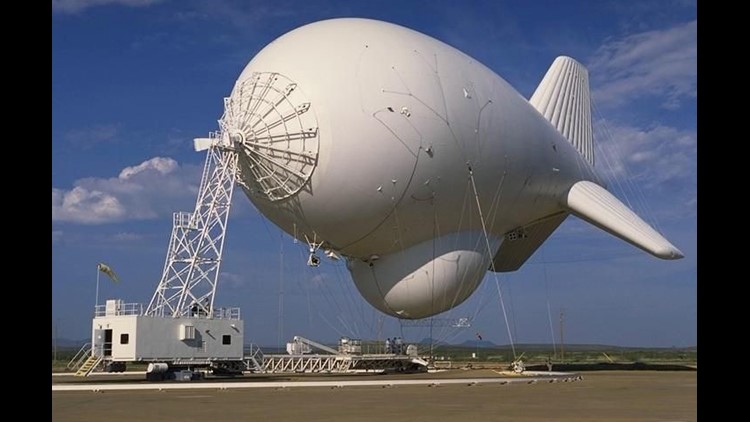 Balloon Surveillance System Back in Action Between Marfa and Valentine

If you've driven between Marfa and Valentine, you might have spotted a huge blimp tethered to the ground. Turns out, it's used to help patrol the border.
Author:
Published: 10:55 PM CDT October 9, 2014
Updated: 4:07 AM CDT July 21, 2018
By Alicia Neaves
NewsWest 9

MARFA - If you've driven between Marfa and Valentine, you might have spotted a huge blimp tethered to the ground. Turns out, it's used to help patrol the border.

Those blimps are called the Tethered Aerostat Radar Systems, or TARS. They are used by U.S. Customs and Border Protection. Their mission is to help agents and officers scan the skies for suspicious aircraft activity along the border.

For the past year, this giant balloon surveillance system between Marfa and Valentine, known as TARS, was out of operation. After repairing and restoring the long-range radar, now, DHS's largest aerostat system is back in action.

"The length of one of our TARS is almost 210 feet. That's about 20 feet longer than the Goodyear blimp," Robert Brown, Program Manager for the Tethered Aerostat Radar System, said.

What they do is use a high powered radar, combined with information airplanes transmit to air traffic control, to monitor low-flying aircraft near the border while they are floating up to 12,000 feet in the air.

"TARS sends information to law enforcement operations center in southern California about aircraft flying to, arriving at, and passing through our borders," Brown said.

Law enforcement personnel use TARS information, along with other computer systems, to sort through the hundreds of identified aircraft, and track suspicious incoming aircraft.

"They might not be following a flight plan, they might not be using authorized air fields, things of that nature would indicate something may be suspicious," Brown said.

CBP would then initiate an investigation or other response, often in coordination with state or local authorities.

There are six TARS sites providing overlapping radar coverage of the entire U.S. - Mexico border: two are in Arizona, one in New Mexico, and three in Texas. CBP also has TARS located in the Florida Keys and Puerto Rico.

But these aren't just placed anywhere. Marfa, for example, was chosen based on several factors.

The other sites in Texas are in Eagle Pass and Rio Grande City.

These balloons have been used by the government for the past 30 years.