Felicia Ruiz, 17, was stabbed to death in 1999. Now, as part of KHOU's Missing Pieces series, we're taking a fresh look at what it will take to solve this cold case. 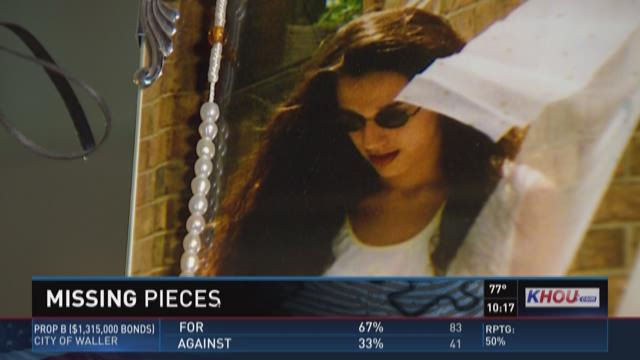 This month marks the 18-year anniversary of a mom and dad burying their daughter.

Felicia Ruiz, 17, was stabbed to death in 1999. Now, as part of KHOU's Missing Pieces series, we're taking a fresh look at what it will take to solve this cold case.

Seventeen. So young, so innocent.

"She was a good student, she was always home on time," said Carrie Ruiz, her mother.

Who would want Felicia Ruiz dead?

"I can't imagine the fear she felt when she realized what was fixing to happen to her," she said.

Stabbed more than 20 times and left to die.

"This murdering creep is still out there, and we can't touch him," Carrie Ruiz said.

Now, a new picture of the key suspect gives these parents hope.

All these years later, Carrie and Lou Ruiz are still searching for their daughter's killer.

"It was right back in there," Carrie Ruiz said.

They showed us the field off 290 and Hollister in northwest Houston where she took her last breath.

"I can't imagine her laying out here that long, nobody to help her, and I don't know they said it took like 7 minutes for her to bleed out," Carrie Ruiz said.

It was October 1999, Felicia's senior year. Her parents pulled her out of Eisenhower High School to protect her.

"She just flat told us they were trying to get her to join the Latin Kings," Carrie Ruiz said.

A street gang, Houston Police say their suspect, Jesus Salazar, belonged to. He dated a girl named Lisa Huerta, but Felicia's mom says Salazar also had an eye for her daughter.

"Lisa Huerta would not let it go. If you love me, you'll prove it by killing her," Felicia's mom said.

Detectives discovered the two devised a plan to carry out under the cover of a Halloween party.

"You could see she was kind of excited, she finally let it out. She says, 'Dad, can I go to a party?'" Lou Ruiz said.

They hesitated, but eventually let her go.

An open field near a vacant lot, perfect for a haunted house. However, when Felicia got there, there was no party. It was all part of a sick plan.

Investigators say Salazar walked Felicia out into the field while Lisa and another teen, Jay Ferrel, waited in the bushes. Salazar threw a punch, knocking her to the ground. Then the trio held her down, stabbing her repeatedly.

"That was a violent, violent murder. Nobody should have to die that way," her mom said.

Lisa and Jay are in prison for their part in the murder. In a taped interview KHOU obtained, Jay told Houston police it was all Salazar's plan.

Jay details how Lisa rented a hotel room, pulled out a knife and got instructions from Salazar on how to kill.

Ferrel: "He goes, he goes, 'If you cut a person from the throat, they start bleeding constantly until you know, 'til they’re dead.'”

All these years later, Jesus Salazar is still on the run. The guy in the center of that mysterious picture, drink in hand and a gun in arm's reach.

"I just couldn't believe it. He's like sitting there at a beach, having a good time, laughing, like no remorse, it's heart-throbbing," Felicia's father said.

"I can tell you where he isn't, he's not in the United States," said Cameron Welch, the U.S. Marshal on the case. "We're actively tracking him. It's a continued ongoing investigation. There's things that I'm not allowed to disclose at this time, but I can tell you this case hasn't fallen on deaf ears, and we haven't forgotten about it."

However, the case is complicated. Salazar is believed to be in his home country of Venezuela.

"This is our daughter Felicia. She was murdered," her mom said at Beaumont campaign rally during the presidential election.

"If I win, we will get him out fast," said President Donald Trump, who at the time was a candidate.

"It's not fair that he lived here, and he murders an American girl, and he goes back to Venezuela and gets protected," her mom said.

They're holding on to a message U.S. Marshals left on Felicia's grave.

"He's going to get caught, so he better start looking over his shoulder because justice is coming," Lou Ruiz said.

A promise this mom and dad made to their only girl and still think about every day.

"That's the last thing we told her before we closed the casket. I bent over and kissed her and told her we are going to get all of these people who hurt you, and we haven't given up since," Carrie Ruiz said.

If you have any information on Jesus Salazar, call Crime Stoppers. You could be eligible for a $10,000 reward.