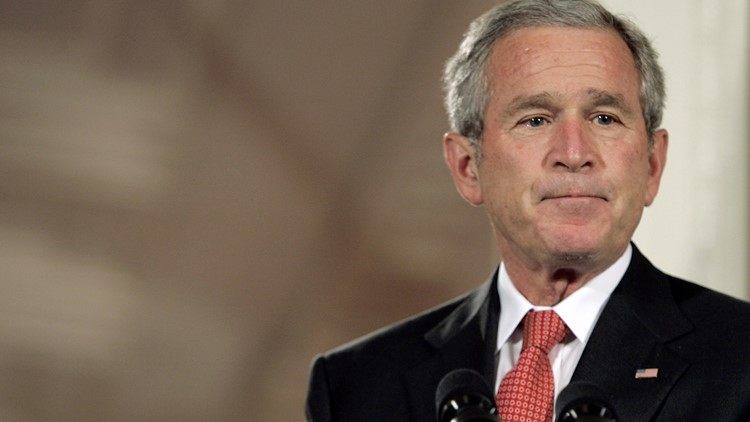 President Bush finishes answering a reporter's question on the Supreme Court ruling regarding Guantanamo detainees during a news conference with Japanese Prime Minister Junichiro Koizumi, not pictured, in the East Room of the White House Thursday, June 29, 2006, in Washington. The Supreme Court ruled Thursday that President Bush overstepped his authority in ordering military war crimes trials for Guantanamo Bay detainees, saying in a strong rebuke that the trials were illegal under U.S. and international law. (AP Photo/Charles Dharapak)

Former President George W. Bush welcomed new U.S. citizens Monday during a naturalization ceremony in Dallas, saying that "amid all the complications of policy, may we never forget that immigration is a blessing and a strength."

Bush and former first lady Laura Bush spoke to the around 50 candidates for naturalization during the ceremony at his institute at the George W. Bush Presidential Center. Those becoming citizens at the ceremony came from more than 20 countries around the world.

He told the group that he hopes "those responsible in Washington can dial down the rhetoric, put politics aside, and modernize our immigration laws soon."

Noting public debate on immigration "can get pretty sharp," he told them that they signed up with a "boisterous democracy." He encouraged them to participate in it and vote.

"As president, I worked hard on comprehensive immigration reform, and I regret that our efforts came up short," Bush said. "Today, emotions can cloud the issue. But here at the Bush center, we are clear-eyed about the need to enforce our borders and protect our homeland, and about the critical contributions immigrants make to our prosperity and to our way of life."

Bush did not mention President Donald Trump by name, but his words stood in contrast to his fellow Republican's fiery rhetoric about immigrants. Last week, Trump used the first veto of his presidency to overturn a measure Congress passed that would have overturned his emergency declaration to build a wall along the southern border — a centerpiece of his successful campaign.

It's not the first time Bush given such a rebuke of the current administration's political tone. Bush said at a speech in New York in 2017, "Bullying and prejudice in our public life sets a national tone, provides permission for cruelty and bigotry, and compromises the moral education of children."

Last year at a speech in Abu Dhabi Bush noted there are people willing to do jobs Americans don't want to do, adding, "We ought to say thank you and welcome them."

Immigration is a focus of the George W. Bush Institute, which says it advocates for "smart, skills-based immigration reform."

Laura Bush said Texas is a state that "thrives due to the prosperity, ingenuity, transformation and generosity of immigrants."

George Bush told the group: “I’d like to point out that not only are you becoming an American, but as Laura mentioned, you’re a Texan. And if you walk out of here with a little extra attitude in your step, it shows the culture is taking hold.”