Only a handful of the Code Talkers remain alive. Peter MacDonald, 91, is one of them.

In a special interview with 12 News, the 91-year-old talks about his service and the impact Navajo Code Talkers had on WW II.

“It was not an easy job. Over a dozen killed in action, Navajo Code Talkers,” said MacDonald. From his living room sofa in Tuba City, he eloquently spoke about the special force of Navajo Marines who have passed on.

“We in our heart and in our mind remember those with whom we serve, and we say 'thank you' to them and their family for making that sacrifice,” said MacDonald.

“Yes, I lied about my age when I went to the recruiting station,” he said. All because he saw his clan cousin come home in a “shiny suit” he also wanted to have.

“I ended up in Guam…but August 1945, two bombs were dropped… Hiroshima…the second bomb was dropped on Nagasaki…I was transferred… to go into north China because there were close to a million Japanese soldiers. They did not want to surrender, and eventually we got those Japanese to surrender,” MacDonald said.

Seventy-four years later, Americans honor Code Talkers like Peter, because without their native language, the outcome would have been different.

How the Navajo code talk was created

Shortly after the bombing of Pearl Harbor, Peter explains the U.S. was getting ready to fight back in the Pacific.

“Before long, they ran into one big problem. The problem was communication. They tell us in any war, the side that has the best communication normally has the advantage in war. In our case, the enemy had the advantage. Why? Because they were breaking every military code that was being used in the Pacific, making it very very difficult to strategize,” MacDonald said.

“So the gentleman by the name of Philip Johnston was working near San Diego, California. When he learned of the situation in January of 1942, just a few weeks after the bombing of Pearl Harbor, he went over to a Marine Corps base, suggested, 'Why not use Navajo language as a code?'” he said.

The enemy didn’t know Navajo, nor did many people outside this kind of Native American language.

Peter explains that eventually, in April of 1942, military officials agreed to try it out, only allowing 30 young Navajos to be recruited.

“See if they could go through boot camp and pass boot camp, combat training, communications school. If they did that, then they would be separated to develop a military code using Navajo language. That’s how this whole thing got started, of course, through the history of all this, it turns out Navajos make the best Marines,” he said.

By the end of July 1942, MacDonald and the young group of Navajos had created 260 code words, plus codes for punctuations marks, but it all needed to be tested in battle.

RELATED: These are the WWII Navajo Code Talkers honored at the White House Monday

“About 78 years ago, the first Marine division landed on Guadalcanal with about 13 or 14 Navajo code talkers to test the code that was just developed. A few weeks after the battle on Guadalcanal [the] commander of the first marine division, sent word back to the United States saying, ‘This Navajo code is tremendous. The enemy never understood. We don’t understand it either,’ he said, ‘But it works! Send us some more Navajos.’ He was delighted, very happy and ordered San Diego Marine Corps to take charge of this new military code that had just been developed and tested under actual battle on Guadalcanal,” said MacDonald.

Not long after, in 1944, he joined the Marine Corps, not knowing he was being tested for Code Talker school.

“They would just ask, ‘Do you wanna join the Marines? Do you wanna fight the war in the Pacific?' 'Yes!' Then we joined the Marines, going through boot camp, just like everyone else, with all the rest of the Marines, go through a combat training, Marine Corps communication school. After all that, then they would separate us from all the other Marines, take us to a special Navajo Code school that was a top secret operation and only those of us—we were chosen to become Code Talkers, were allowed to go to that building, that classroom and learn the code that was already developed,” MacDonald said.

The enemy never cracked the code

Japanese forces eventually surrendered after the atomic bombings of Hiroshima and Nagaski. Peter attributes a great part of this victory to the Navajo Code Talkers.

“The only military code, they tell us, in modern history, never broken by an enemy. And believe me, they tried. The Japanese actually captured one Navajo. He was not a Code Talker, he was in the army in the Philippines, for two years, they have him listen to the Navajo messages going through the air, have him listen, and he tells them what we’re saying and it doesn’t make sense. So they punished the poor Navajo, thinking that he’s just playing tricks on them, so they tortured him until he tells them exactly what we are saying, and he was, he’s telling them exactly what we’re saying, but it made no sense. Two years they punish him. This army guy was near Gallup, New Mexico, after the code was declassified in 1968. He came to our meeting, 1970. He was very angry. He said, ‘I don’t know what you guys were talking about, but I translated every word to the Japanese and they keep punishing me! I suffered,’ he said. So the Code Talker Association made him an honorary code talker,” MacDonald said.

“That’s the real story of the Navajo code—was that, like I said, the only military code in modern history never broken. But it also saved hundreds of thousands of lives,” said MacDonald.

He continues to live in Tube City where he says he’s been the last 30 years. 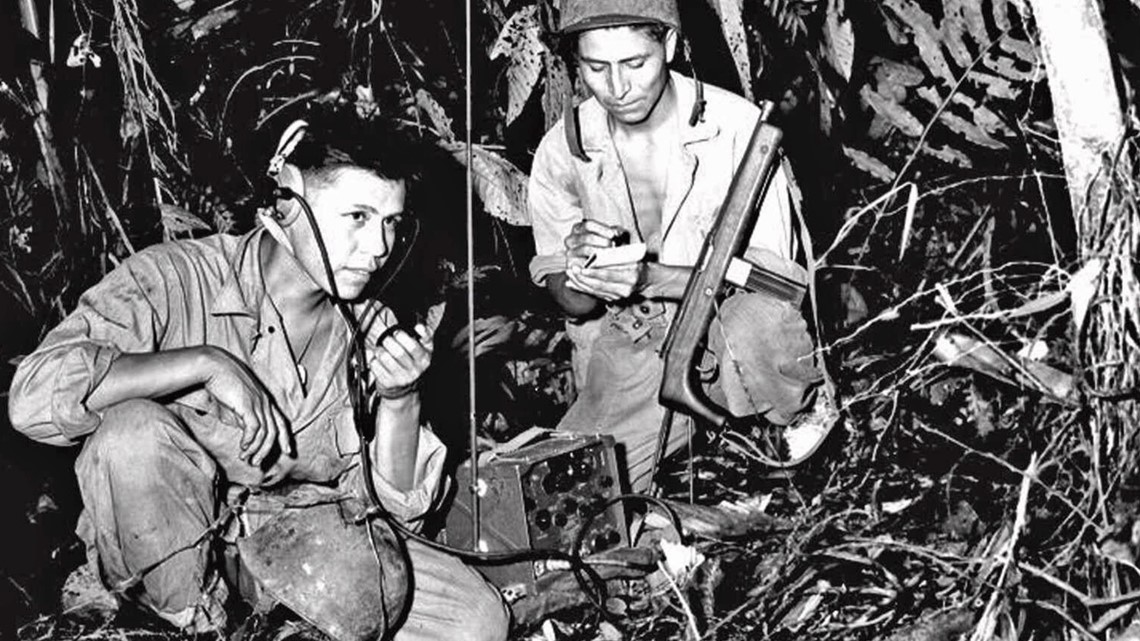