The announcement came as gyms reopened May 18 due to Abbott's order released on May 5. 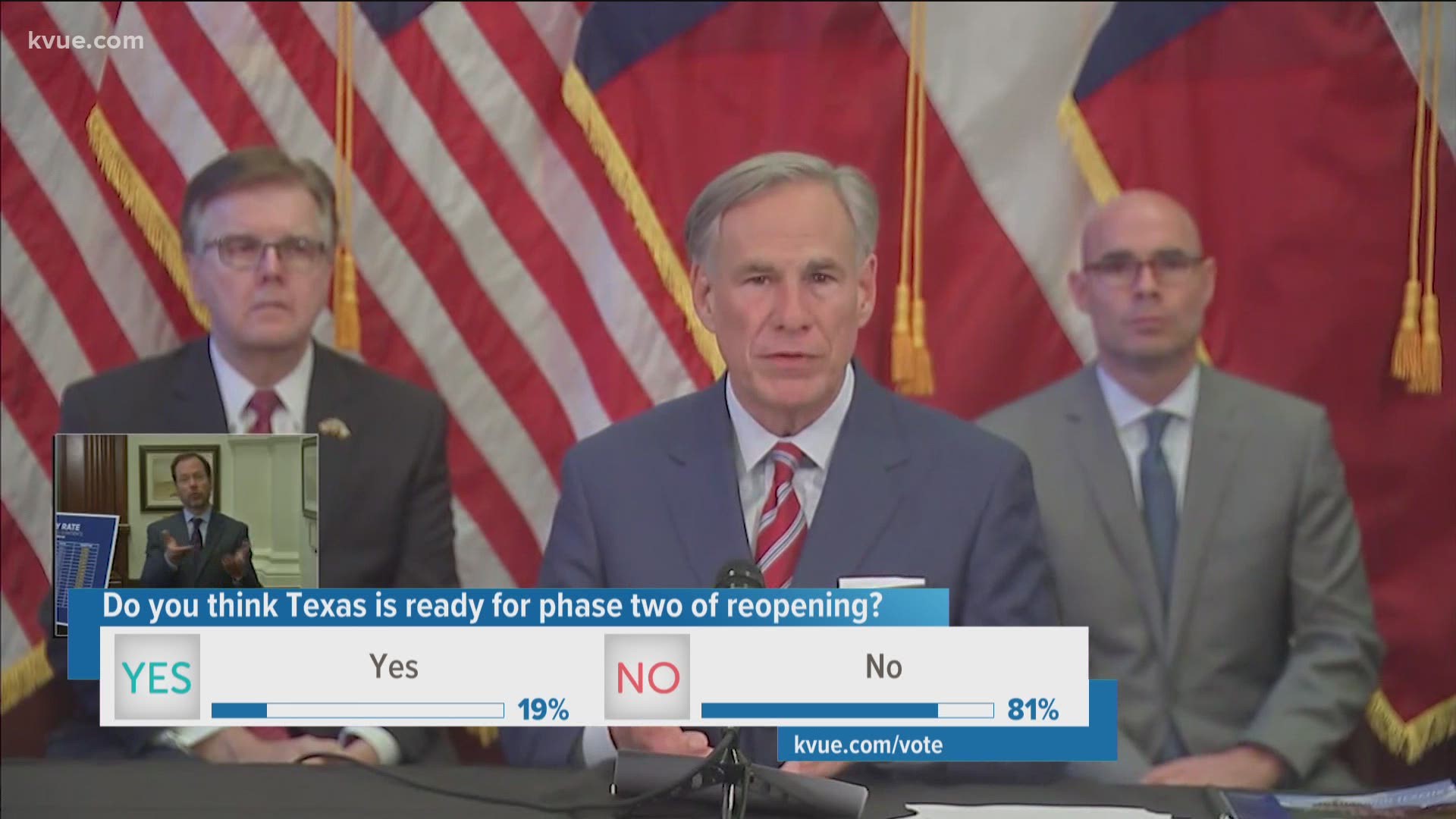 AUSTIN, Texas — On Monday, May 18, Gov. Greg Abbott gave an update on what the state is doing in response to coronavirus, also known as COVID-19.

During the press conference, Gov. Abbott announced Texas is prepared to enter phase two for reopening the state.

A full list of theses businesses that are able to open, and the guidelines for them, can be found on the governor's website.

Gov. Abbott also announced that all child care programs are able to reopen on May 18.

Reopening Texas: Here's what is set to open next in Texas

Some professional sports will also be able to return on May 31, including golf, auto racing, baseball, softball, tennis and basketball.

Checklist: Gyms can reopen in Texas, but must follow these guidelines

Regarding schools, Gov. Abbott said schools will be able to offer summer schools as long as they follow safe distancing practices as soon as June 1.

Some counties will be delayed by one week in entering phase two, including El Paso, Randall, Potter, Moore and Deaf Smith counties.

Gov. Abbott said that in the three weeks since announcing the start of phase one in Texas, the state's capability to provide personal protective equipment and COVID-19 tests has continued to increase.

According to Gov. Abbott, the state is now able to administer more than 25,000 tests per day.

Gov. Abbott said the three major hotspots in the state of Texas are nursing homes, prisons and meat packaging plants. He said surge teams are able to go into these hotspots to help test and manage COVID-19.

Gov. Abbott said the voluntary testing and tracing programs have also helped to manage the virus.

According to the governor, a key indicator for opening up is the state's positivity rate. Gov. Abbott said the past month has shown a downward trajectory in the positivity rate, starting at almost 14% on April 13 and falling down to just under 5% on May 17.

Checklist: Tattoo, massage and other parlors can reopen in Texas

Checklist: Bowling alleys, bingo halls, skating rinks can reopen May 22 with these guidelines

Checklist: How Texas bars will operate when they can reopen May 22

Another indicator, according to Gov. Abbott, is hospitalizations. The governor said if the state's hospital capacity ever becomes compromised, the state will take swift action to keep the hospital populations safe.

On May 5, Gov. Greg Abbott announced gyms will be among some of the types of businesses that can reopen on May 18 with some restrictions.

"Texas is in a position to continue opening parts of our economy because of the efforts and determination of the people of Texas," said Abbott in the May 5 announcement. "Over the past month, Texans have worked together to contain the spread of COVID-19 by following social distancing practices and staying at home whenever possible. As we move forward, I urge all Texans to continue following these social distancing guidelines and the health standards we have provided. With every Texan doing their part, we will contain COVID-19, we will unleash our entrepreneurs, and we will make it through this challenge together."

On May 1, some Texas businesses such as restaurants, retail stores and malls began to open their doors again as part of phase one Gov. Abbott’s plan to reopen the state. Before phase two begins, Gov. Abbott said there must be two weeks of data showing that the virus is continuing to be contained.