From March to June, Texas ranked second in the nation with $770 million in PPE purchase orders, according to data. 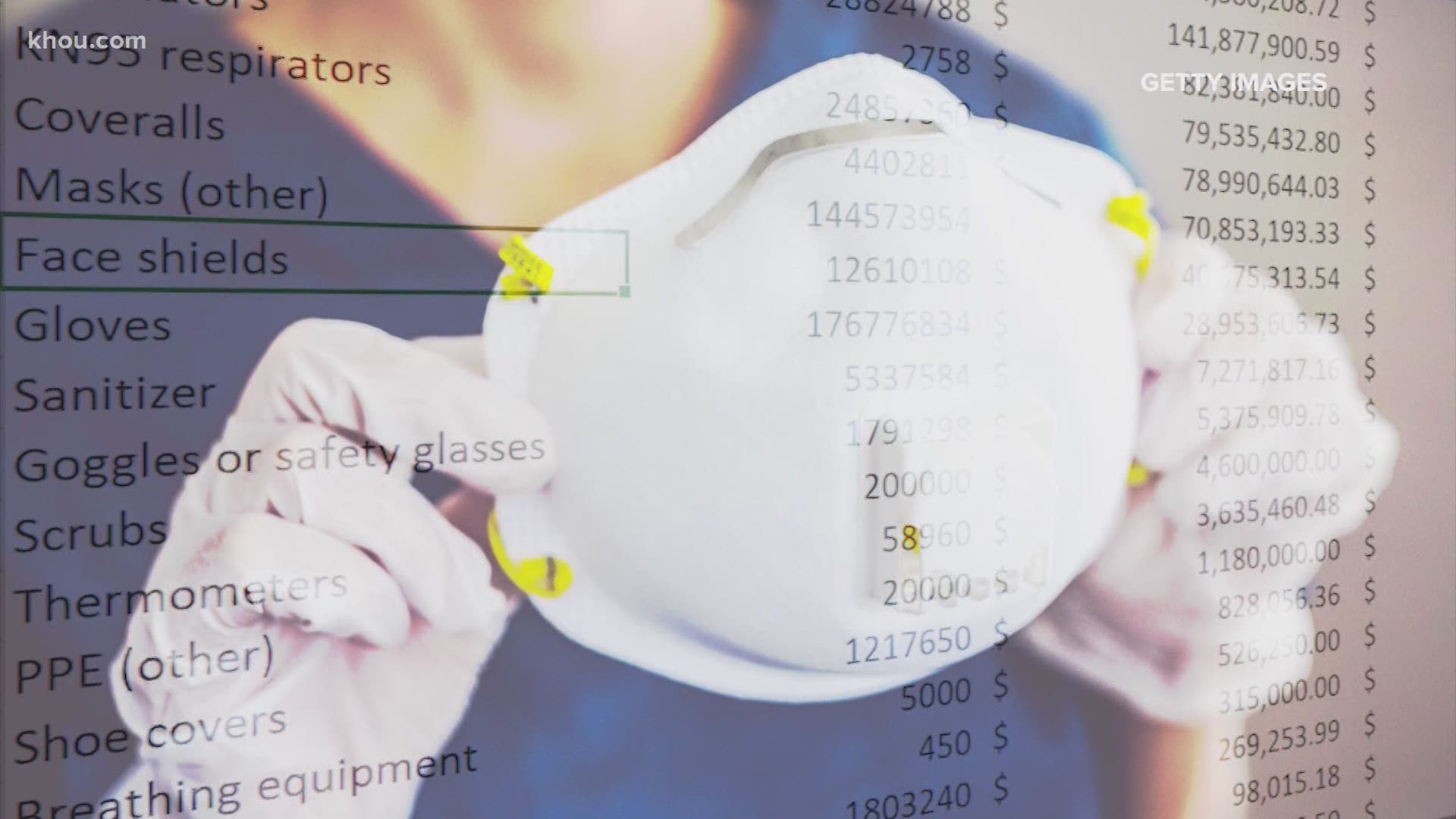 HOUSTON — In the early days of the COVID-19 pandemic, the scramble to secure hard-to-get personal protective equipment resulted in the State of Texas ordering items at wildly fluctuating prices, sometimes double, triple or more than ten times normal market value.

From March to June, Texas ranked second in the nation with $770 million in PPE purchase orders, according to a KHOU 11 analysis of Texas Division of Emergency Management data obtained through open records requests by the Associated Press.

California topped all states with $1.5 billion in protective equipment.

"The procurement of PPE was pathetically chaotic,” said Charles Tiefer, professor of government procurement at the University of Baltimore School of Law.

Tiefer and other government contract experts said that chaos was fueled by little to no coordination by the federal government, leaving states to fend for themselves and often bypassing normal competitive bidding rules.

“No competition, high prices…whatever the cost, because it’s life or death whether you get the PPE,” Tiefer said.

The costs varied greatly according to the TDEM purchase order data. Texas ordered $204.5 million of N95 respirator masks from March to June, but on a single day in March the price per mask ranged from 50 cents to $6.25.

For protective gloves, the same vendor charged the state three different prices on the same day—from 10 cents per glove up to $1.27. Texas ordered a total of $171 million worth of gloves from March to June. The 16 cents per glove average was above the 14 cents national average in the same time period.

“They had them over a barrel, they could charge whatever they wanted.”

RELATED: Arizona man charged with stealing millions from State of Texas after claiming to be mask distributor

As for ventilators, TDEM records show the state ordered $82 million at an average cost of nearly $30,000 per ventilator. That’s almost double the national average of $17,000 ordered in the same time period.

Schwartz doesn’t blame state governors and their respective emergency management departments, but rather the failure of the federal government to engage in a national procurement process.

“The fact that Texas in the same day spent wildly different amounts doesn’t shock me,” he said. “I think given what the federal government did and didn’t do, each state was put in that position where they had no choice but to do it that way.”

Tiefer added that in the end, the taxpayer is the one who loses.

“I’m sad that procurement, which could have played an honorable part in all of this, instead fell into chaos.”

A spokesperson for the TDEM said that purchase orders are not considered payments and do not represent the ultimate amount of goods received or funds disbursed. The TDEM spokesperson said in some cases, orders were canceled or partially canceled because of supply or quality assurance issues.