Over the weekend, Gov. Greg Abbott made it easier for nurses to reinstate their licenses. 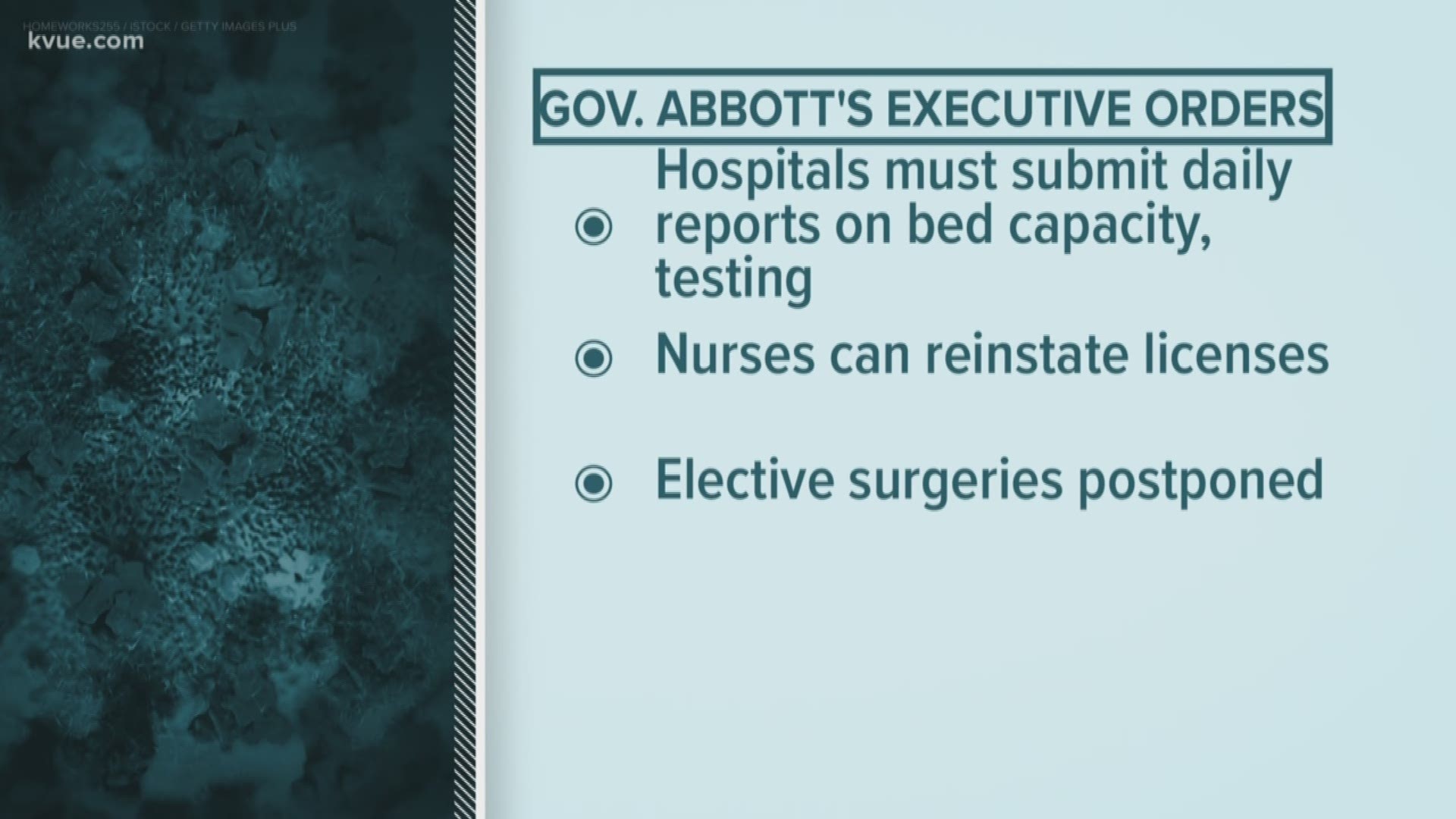 AUSTIN, Texas — Gov. Greg Abbott is doing what he can do to increase the number of hospital beds and medical staff across the state.

On Tuesday, he announced an executive order requiring hospitals to submit daily reports to the state health department on bed capacity and COVID-19 testing.

On Sunday, the governor waived some regulations making it easier for nurses to reinstate their licenses in order to avoid a shortage. He postponed all elective surgeries, freeing up hospital beds.

East Texas' Karen Kern is taking advantage of this process and said she's ready to get to work.

"If this goes the way they say it's going to go, the nurses are going to be so overwhelmed and they need my help," said Kern.

She said she's always felt a need to help people. She said it's just how nurses are and Gov. Abbott thinks this will help hospitals be prepared if things get worse.

"A lot of the nurses are overworked. They're burnt out and that's before this virus came about, and that's part of the reason I want to go back in to help lift a little bit of the hardship," said Kern.

Abbott said hospitals need as many medical professionals as they can get. Kern didn't think twice when she saw the opportunity, submitted the forms to the Texas Board of Nursing, and sent in to get her license reactivated.

"Usually they have to take continuing education classes and, actually for someone who’s been retired as much as I have, over four years, they have to take an additional class and pass another exam, and all of that’s been waived," said Kern. "If you're healthy and you're able to do it, I encourage them to do it. They need us."

RELATED: Here is a closer look at our hospital bed space and healthcare staffing levels in Texas

Abbott is also fast-tracking licensing out-of-state physicians, retired physicians and physician assistants, and the Texas Medical Board was ready for this.

"As soon as the governor announced his disaster declaration a week ago, we immediately put into a process that we had actually first started back during Hurricane Harvey," said Dr. Sherif Zaafran, Texas Medical Board's president. "Anybody and everybody who wants to get licensed in the state of Texas temporarily under these provisions is more than welcome to do so."

Gov. Greg Abbott: Statewide shelter in place 'not appropriate' at this time