Our frontline workers see it differently, they are advocating that city leaders enforce the governor's order which includes wearing a mask. 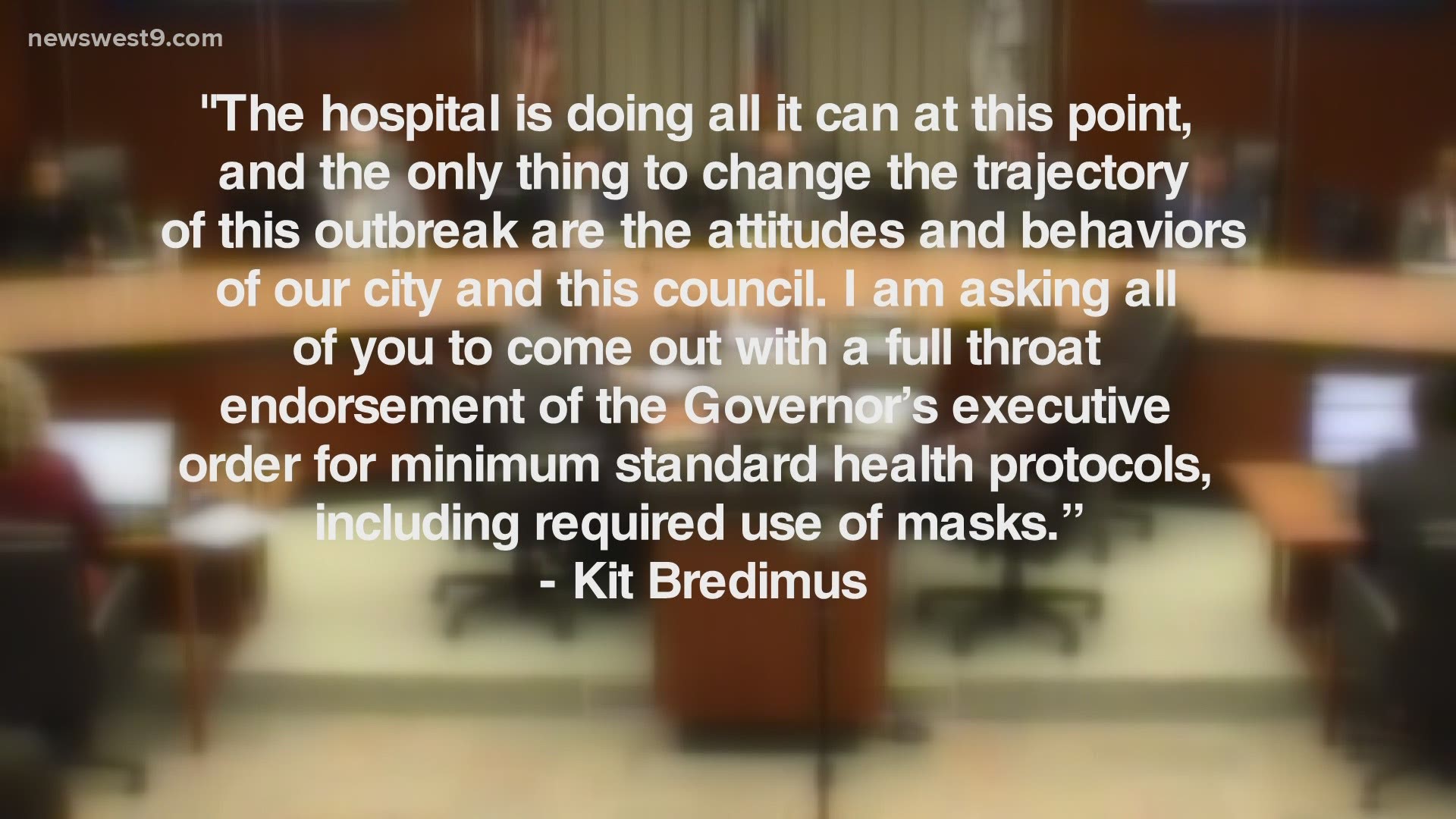 MIDLAND, Texas — We are seeing record high COVID-19 numbers and hospitalization rates in the Permian Basin.

Our medical resources are strained and dwindling, while our health departments and hospitals are overwhelmed.

The mayors of Midland and Odessa have no plans on changing course and enforcing the governor’s mask mandate.

“This spike is far worst than the other two spikes," Russell Meyers, Midland Health CEO, said. "We could explain the other two--there was spring break and then a nursing home outbreak but now this is community-wide across the region."

It is a grim sight at hospitals like Midland Memorial and Medical Center, where COVID-19 patients have nearly doubled in recent weeks.

“Why is this happening? Plain and simple we have gotten comfortable. This spike is far worst than the other two spikes," David Turner, Odessa Mayor, said. "We are not wearing masks as we should, and we are not practicing social distancing as we should.”

So what needs to be done?

Midland and Odessa’s mayors are emphasizing the importance of wearing a mask, though they are still short of enforcing a mandate requiring you to wear one.

“I am not going to get into the virtue signaling saying we are going to put a mandate in place that we can't enforce. But we can encourage."

Our frontline workers see it differently-they are advocating that city leaders enforce the governor's order which includes wearing a mask.

On Tuesday, Sammi Steele pressed the mayor on why he will not enforce masks. Here is a snippet of that conversation:

Sammi: Yesterday, Kit Bredimus, the Chief Nursing Officer of Midland Memorial Hospital spoke to the city council and you, Mayor, asking to enforce a mask mandate. What do you have to say the medical workers like Bredimus?

Patrick Payton: That is not what he said at the city council meeting. In fact, I asked him point-blank if a mandate was something that we should do. He said it was not something we should do. It is not something we can enforce. I asked him what would you like us to do and he said I would like you to reinforce the message that we want people to be wearing masks around this community. So it’s a misunderstanding to think he told city council he wanted us to issue a mandate. The mandate, very simple is where we start patrolling and looking for people without masks. The mandate is asking us to sit here and ask the residence in Midland and Odessa starts masking up to start masking up again and practicing social distance. That is a difference, it’s not exactly saying the same thing.

Patrick Payton: I don’t think that clears it up yet. That’s not what I heard at the city council meeting. But we can move past that.

Sammi: Well we have his speech transcribed for us.

Here is what Bredimus said to the city council on Monday:

"The hospital is doing all it can at this point, and the only thing to change the trajectory of this outbreak are the attitudes and behaviors of our city and this council. I am asking all of you to come out with a full throat endorsement of the governor's executive order for minimum standard health protocols, including the required use of masks."

NewsWest 9 spoke with Bredimus to clarify what he was asking the city council to do. He tells us he stands by a mask mandate and doubled down on the plea to have leaders start enforcing the governor’s orders.

Midland's mayor has said time and again that enforcing this kind of mandate is near impossible.

For the full press conference with the mayors click here.