Texas long-term care facilities start receiving COVID-19 vaccines Monday, but not all at once

Long-term care facilities like nursing homes and retirement communities chose between CVS, Walgreens and the government to deliver and administer COVID-19 vaccines. 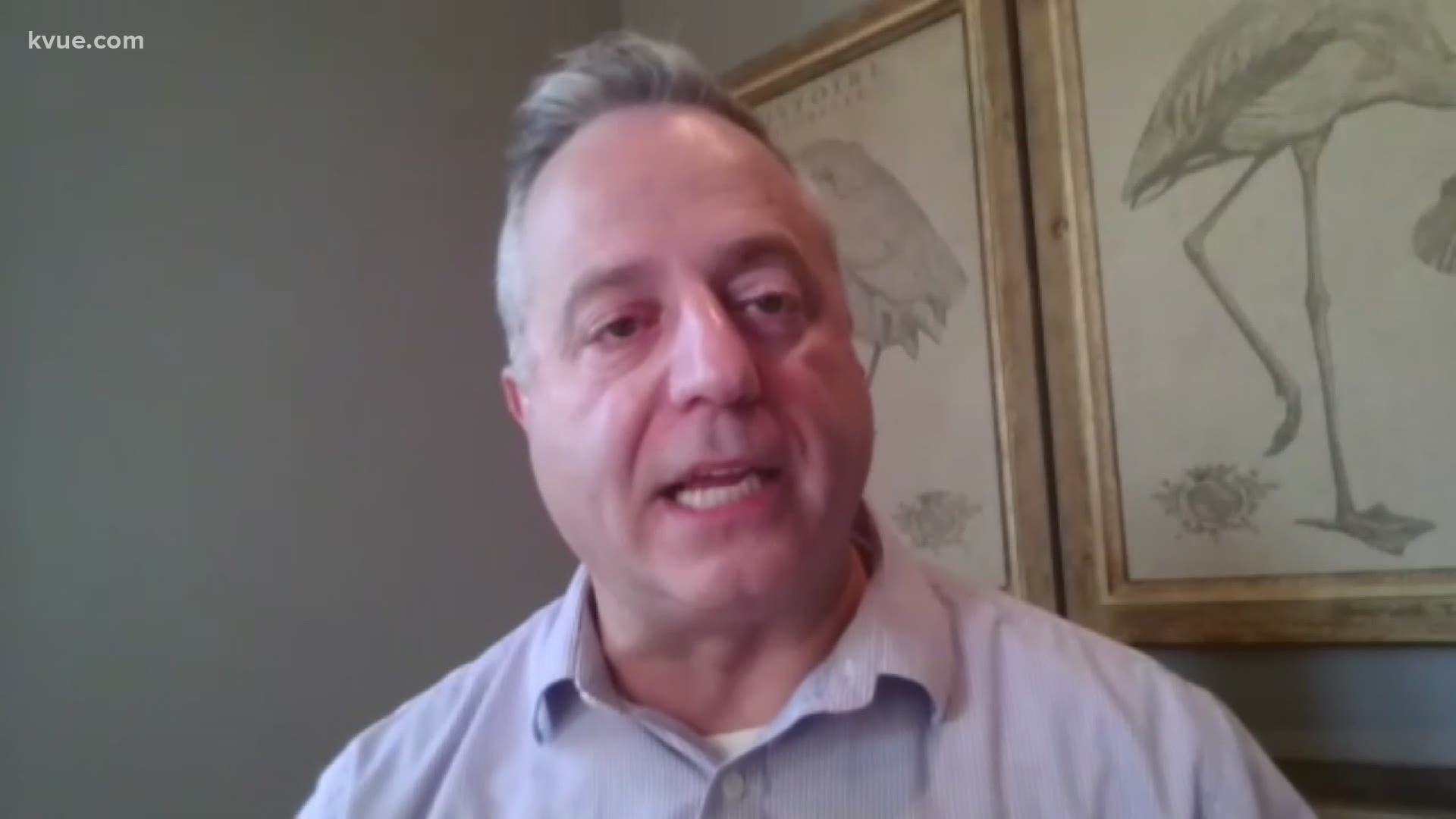 Earlier this year, long-term care facilities had the option to have CVS, Walgreens or the federal government administer and deliver coronavirus vaccines – 2,000 facilities chose CVS. KVUE talked with John Fratamico, one of the district leaders with CVS, regarding the big picture of delivery and administration to close out 2020.

KVUE: Let's just start real general. What's the plan? How does this happen? What is CVS's role in all of this?

CVS: Two-thousand long-term care facilities chose us to be the providers, and that would equate well over 275,000 people, which would include residents and the workers at those facilities. So what we've done prior to this time, so prior to tomorrow, is we've already had schedules in play for these locations, and they're throughout the state of Texas, obviously. Right, so some are going to be in Houston, DFW, San Antonio, et cetera. As we go forward now, we have teams already selected. They're already certified to give vaccinations. These are experienced individuals to do so. We have the logistics of the vaccines that have already arrived at the facilities and our facilities that we chose were select depot locations. And the reason why we chose them is because from geographically – so we can use an example in the DFW area – for example, if we were in the northern part, we would pick a store there. And then the reason why we did it, because we have a concentration of long-term care facilities that we can launch from. OK, so the good thing about that is we have our teams and they can go as high as six pharmacists on this team to vaccinate to as low as two or maybe even one, depending on how many shots we're going to get. And then we will always have technicians there. We have up to three technicians for administrative duties and to assist the vaccinator on site. And so that's where we are right now for when we launch [Monday]. So it's exciting times for Texas because, you know, we get to make a difference in a facility. Like if you think about it, back in March when everything was locked down, some of these individuals haven't seen their loved ones. or should I say in person haven't seen their loved ones, since March. I'm sure they've seen them on Zoom and Facebook. And I'm sure you can attest that's not the same as being there and holding hands and hugging and giving kisses and stuff like that.

KVUE: To clarify, the 2,000 facilities are not all receiving vaccines Monday, correct?

CVS: That's over the next three months. And there's going to be three visits to each facility. We go into these sites initially, we already have pre-approved individuals that were already signed up to be vaccinated. What we're going to do is, if you can imagine, the team will go to a depot store, CVS store. They would pick up the vaccine. Right. And they would pick a little extra too just in case there might be individuals that they may have missed on that initial visit that needed to be vaccinated. We don't want to go just exactly at [what we need]; we want to go a little above to protect that, provided we keep it contained and dry ice and all the good stuff that keeps it stable. There's not going to be an issue. Once it's used, or I should say prepared, then we have a very short timeframe to use it. And, you know, with the vaccines we have and the people we anticipate, that's not going to be an issue. So that's the first visit. The second visit will be the three to four weeks thereafter. And this is a critical visit, especially for the ones that receive that first shot, because we need to close the gap with that booster shot. That booster shot is critical to the success of this vaccine being effective. You have to have that booster to be effective. And anyone we missed on that first visit, we'll go ahead and vaccine them as well. And then the third visit would be if we missed anybody, the booster shot for the second time around, anyone we missed, we would close the gap on that third visit. And that particular facility will be closed as soon as you can see as we go forward. It's a staggered approach to your point to when we get to that 12 weeks of completion for the whole country with the long-term care facilities.

KVUE: Are you using both Pfizer and Moderna vaccines?

CVS: It's Pfizer we're rolling out. So if we do transition to Moderna, then that would be as well. To my knowledge, that was not part of what the selection process was. Their selection was to select who would be the vaccine provider, whether it was CVS, Walgreens or state-run program.

KVUE: Once pharmacists arrive, what happens between them and the staff and residents?

CVS: We've already had this program going on in these long-term care facilities prior to tomorrow. What was cool is the state of Texas actually allowed us to go into long-term care facilities as a company to test whether they had COVID-19 or not. So we had a rapid testing. We had our crew that was there. So it was a combination of pharmacist processing the paperwork and then the technicians that were going in and swabbing to test. So we had that kind of process going. So it's going to be similar, except there's going to be a little change. The switch is going to be where the pharmacists now are vaccinating and the technicians are going to go down to the administrative work and providing the right workflow that we want to happen. Because what we would like to see is a nice, streamlined approach as individuals, whether it's residents, and we go into the room – and we would be fully donned, no different than we used to do when we tested for COVID-19. We're going to take the same safety precautions with the shields, the gloves, the medical gowns and always remove them when we're going from what we consider a dirty room to a clean room. So those process and those safety procedures are going to be in play, no different. So that's familiar to us. That's very familiar. What's going to be the new part is the vaccination part where the pharmacist now are the immunizers in these locations. So we do have a familiarity with it, which is nice. So it's not like it's like starting from fresh. We've got a foundation that's built.

KVUE: Will the pharmacists and technicians be vaccinated before arriving at long-term care facilities?

CVS: They have the option to get vaccinated at the end of our clinics, but if they don't have any symptoms at all, remember, they're wearing safety precautions anyway from the gowns and the masks.

KVUE: How is it decided which facilities get vaccine visits first?

CVS: That was already done ahead. So there was some logistics at a time when they selected CVS Health in the state of Texas, that there was some back work on it. So basically, you look at the depot store, wherever that location may be, we'll call it in the DFW area, for example. And from there, we would then work with the facility managers at the places and then we would just look at, you know, how many vaccines we would have and it would be more about working on dates and and times and vaccinations that need to be done. That pre-work that we were talking, you and I were talking about, that has already been done like weeks ago. So that's done leading up to actually last week. I think the the facility's going to want to have the most bang for their buck. If you think about it, 'When when do I have the most residents ready? They'll have the residents there. And then how many workers will they have? So I think they want a big population group to vaccinate at the time. And so that's one piece. And I think the other piece would be the logistics of us getting to them, the distance to the facility. So there's so many different factors, but I think that's how it played out. But as we go forward, everyone has a schedule, so there's no one that's going to be left behind.

KVUE: What's a 'depot location' and how were those selected?

CVS: Like the spokes in the wheel right? It's in the middle. And from there, what's the shortest distance from the facility that we would designate to the cluster of long-term care facilities? What we're trying to do is provide the shortest means, provide a location where we can receive the product of vaccine so that we can get it to them in a quick, efficient manner without delay.

KVUE: Do all of the facilities that signed up with CVS have an existing relationship? Or are there new ones?

CVS: Most of them have because we had done COVID-19 long-term care testing in these facilities, most of them. But there are some new ones. So that's exciting that we get to build relationships and newer facilities that we haven't been used to.

KVUE: Some long-term care facilities did something similar with the flu vaccine, how does this compare to those vaccine events?

CVS: A vaccine in this case, the concern with this would be the stability. Right. So you want to make sure once it's ready to be administered that we use them in the timeframe that it's supposed to. So that would be the difference, primarily with the flu shot, you could just leave it out there for 30 days. The problem, though, it still has stability opportunities as well. So there is that piece there. I think that would be the bigger difference. Other than that, you don't get a booster shot from the flu. So you have to be strategic about the next schedule for that booster shot. That's what closes the gap on efficacy. You want to have the most effective approach. You need to have that booster shot in three weeks for the Pfizer vaccine.

KVUE: Are facilities paying for this?

CVS: This is federally funded, so there is no cost to them at all.

KVUE: Only these facilities that are already scheduled will receive vaccines over the next 12 weeks, right? People cannot go to CVS and get one?

CVS: Those are already pre-scheduled unless anything changes. And again, that would have to be from a governmental level working with the private sector.

KVUE: Will facilities receive these vaccines any day of the week?

KVUE: How are you transporting the Pfizer vaccine?

CVS: We have these Pfizer-approved containers, so they have dry ice in them. Everything's good. So this is Pfizer providing the right receptacle to contain these products and provided we continually change out dry ice when necessary, the stability is right where we need it to be.