"We have seen a substantial increase in our case numbers over the past month, in particular over the past week," said Austin Public Health Authority Dr. Mark Escott. 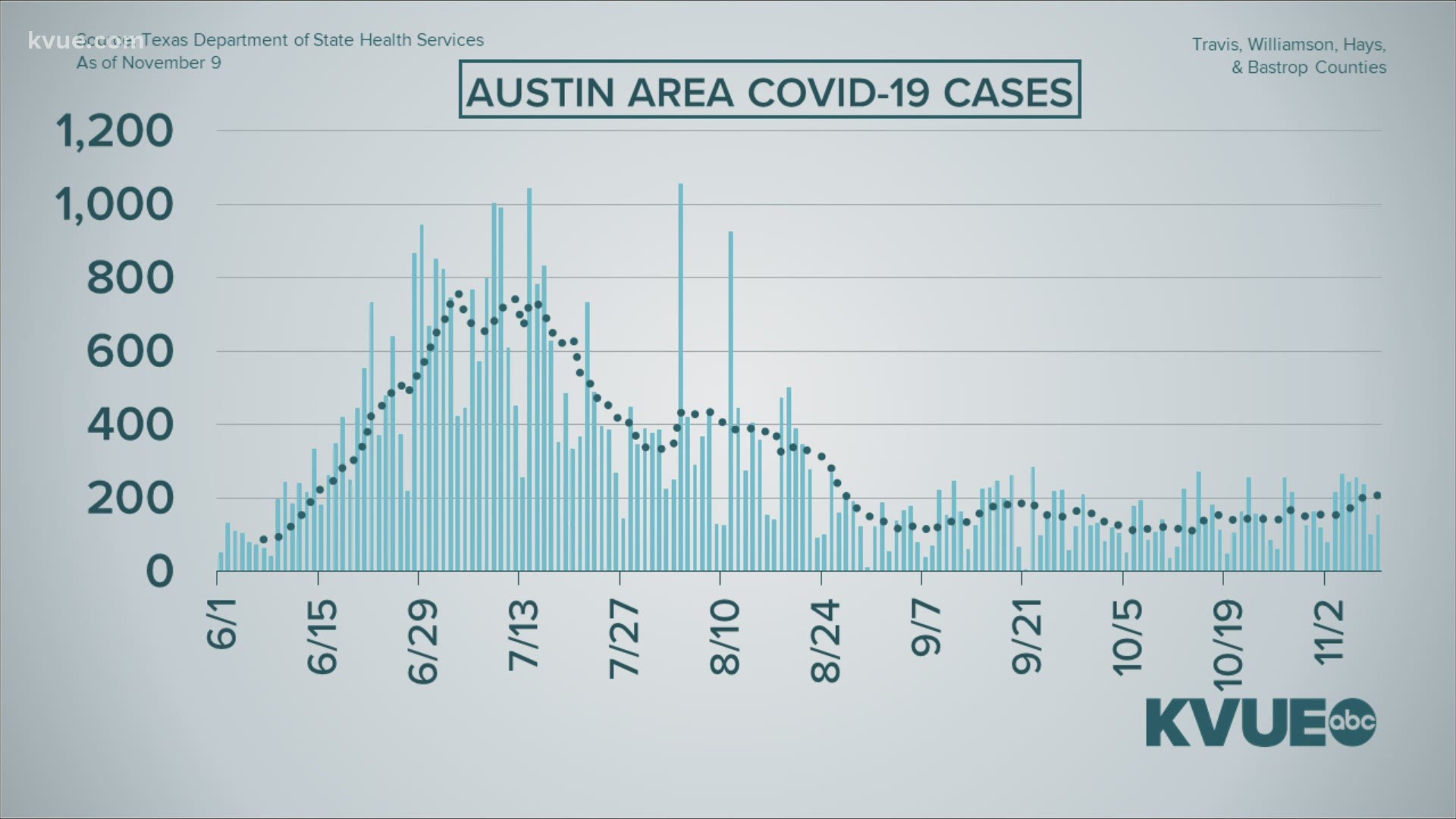 AUSTIN, Texas — Austin's health leaders are continuing to encourage people in Austin-Travis County to get tested for COVID-19 if they feel any symptoms or if they have potentially been exposed to coronavirus.

According to health officials, the coronavirus pandemic has progressed in a negative direction in the past month.

"We have seen a substantial increase in our case numbers over the past month, in particular over the past week," said Austin Public Health Authority Dr. Mark Escott in a briefing Nov. 9.

Escott said the seven-day moving average of new cases had risen to 135, which is more than double what it was at the "low point" during the last surge (64 on Oct. 4). Admissions were up more than 100% and hospitalizations were up 67% in the same time frame, according to Escott.

Escott also said there has been a "significant increase" in the positivity rate and added that the rate for 10 to 59 age groups were all above 5%.

"So we have significant increases in transmission, which means that we have to reenergize our efforts to act in protective ways -- the masking, the social distancing and the personal hygiene," Escott said. "It's important now that we put a lid back on this, that we drive the numbers back down in advance of Thanksgiving."

APH Chief Epidemiologist Janet Pichette said in the media briefing that the department has started to see cases linked back to Halloween gatherings, but did not clarify how many.

"We're able to identify and beginning to see the impact of Halloween gatherings on our community," Pichette said. "And I'm sure many of you have seen pictures of activities that took place down on Sixth Street on Halloween and a lot of people gathering. But as Dr. Escott mentioned, we need to really drive home our prevention related to COVID-19, and that is making sure that you wear a mask. You need to wash your hands thoroughly and avoid touching your face. You need to be sure that you social distance."

On Halloween night, photos were taken that show thousands of people on Sixth Street in Downtown Austin. While some wore masks, as depicted in these viewer photos, you can see few were practicing social distancing.

"So, right now we are seeing an increase in cases, but some of that increase started before Halloween," Escott said. "But it's certainly continuing, which we suspect is a result of gatherings of Halloween. Right now, the projections are beginning to look more unfavorable in terms of Halloween, with increasing cases through Thanksgiving and then continuing to increase after Thanksgiving. So, again, it's not a forecast. It's not what will happen. It's what is most likely to happen if that transmission stays the way it is now. So, we can affect that forecast. We can change it if we work harder to reduce transmission in our community."

Pichette added that, based on case investigation over the last week or two, APH has seen some cases that are associated with gatherings related to Halloween. Pichette said she would anticipate that Thanksgiving would have a similar impact.

"Again, which is the reason why we're trying to stress these prevention measures and that, we want people to be safe in our community," Pichette said. "We want to keep our numbers low."