"You are extremely lucky to be living in the U.S.A. If you refuse to stand for the Pledge of Allegiance ... are you revealing maturity and wisdom?" 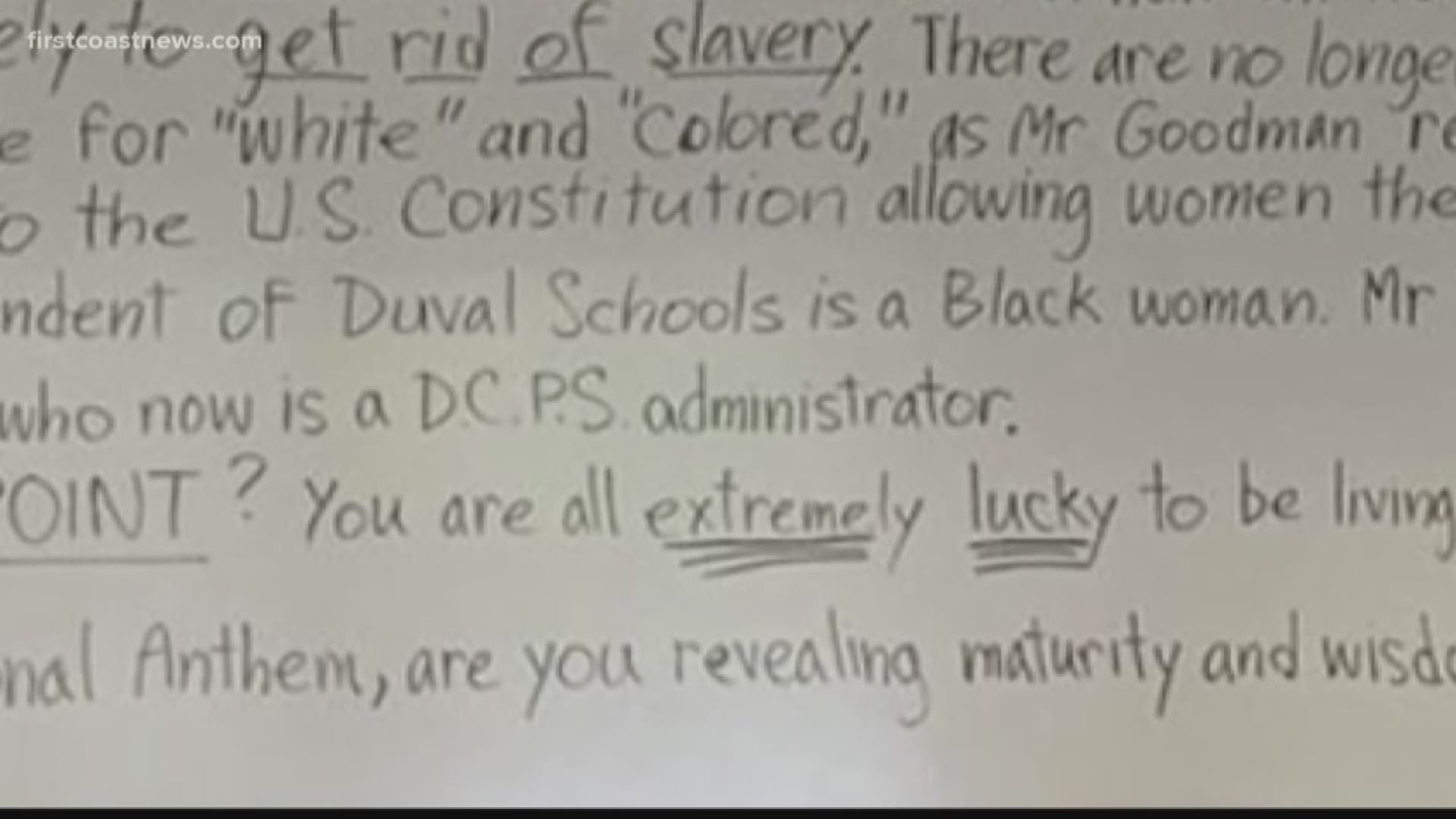 A First Coast High School teacher was removed from the classroom after writing a statement on his board scolding students who choose to not stand for the Pledge of Allegiance or national anthem, according to a Duval County Public Schools spokesperson.

DCPS said the district became aware of the incident Wednesday afternoon and the teacher was removed from the classroom pending the outcome of a review by the Office of Professional Standards.

That same day, a photo reportedly taken at First Coast High School was posted to Facebook showing a classroom whiteboard with the following message written on it:

"THINK: We had about a half-million Americans die in our Civil War, which was largely to get rid of slavery. There are no longer separate but equal water fountains and bathrooms in Jacksonville for 'white' and 'colored,' as Mr. Goodman remembers from the 1960s. We had an Amendment to the U.S. Constitution allowing women the right to vote. We have had a Black president. The Superintendent of Duval Schools is a Black woman. Mr. Fluent, our principal, replaced a Black man, Mr. Simmons, who now is a DCPS administrator. MY POINT? You are extremely lucky to be living in the U.S.A. If you refuse to stand for the Pledge of Allegiance or our National Anthem, are you revealing maturity and wisdom? Actually, you are displaying the opposite. (As some pampered arrogant celebrities and athletes tend to do.)"

The DCPS spokesperson confirmed that the message included historical references about slavery, woman's rights and the election of a black president as well as the fact that the superintendent of the school board is black.

DCPS said the statements made by the teacher are not consistent with that of the state or school board policy.

Florida Statute 1003.44 and School Board Policy 3.60 allows students to be excused from reciting or standing for the Pledge of Allegiance if a parent or legal guardian files a written request with the school principal. It can also be found in the Code of Student Conduct:

DCPS has not confirmed if any of the students had a written request by a parent excusing them from reciting the pledge.

“I believe classrooms provide the perfect place to have insightful and thought-provoking discussions about patriotic expressions and civil liberty,” said First Coast High Principal Justin Fluent. “However, this must be done in a productive and respectful way, and in accordance with law and school board policy.”

First Coast News has reached out to DCPS to learn more about this incident.

RELATED: 'I will NOT refer to you with female pronouns': Duval teacher snubs transgender student's request