Round Rock man allegedly drags dog from his pickup truck

Warning: this article contains details and photos some readers may find disturbing. 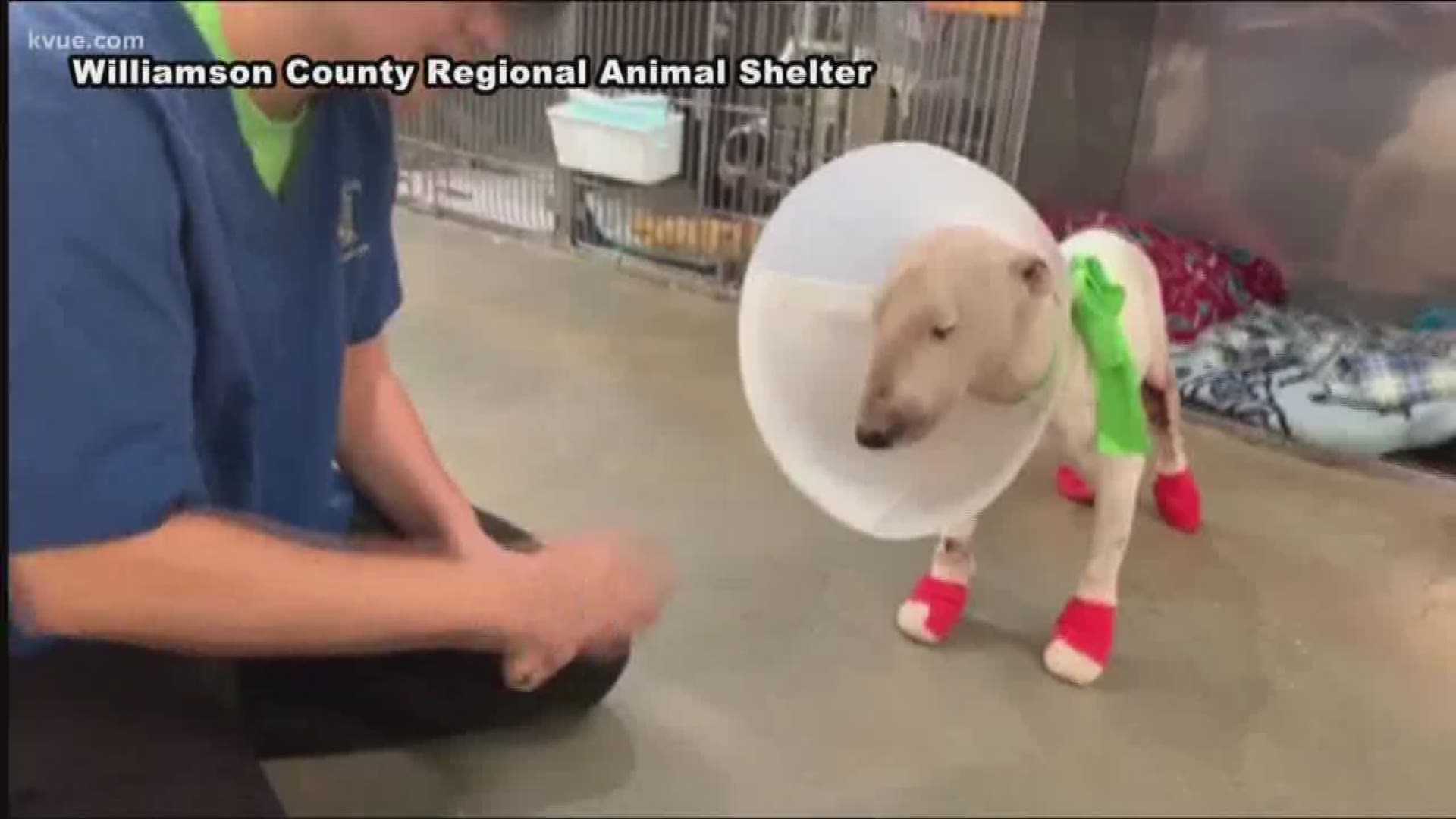 ROUND ROCK, Texas — A Round Rock man is accused of dragging his dog from his pick-up truck, which police say left a trail of blood for nearly a mile, and intentionally running it over.

According to an affidavit obtained by KVUE, around 7:40 p.m. on Saturday, the Round Rock Police Department received a call that a resident had seen someone drive over their own dog with a pickup truck in the 2600 block of Bluffstone Drive.

The caller told police that based on what they saw, they believed the driver of the truck – later identified as 28-year-old Zager Yuseth Zelaya Rubio – purposefully drove over his own dog. The dog was left injured and the caller said Rubio had driven off. The caller said the incident had happened about five minutes before he called police.

A police officer arrived on scene about 10 minutes after the call came in and saw two people standing on the sidewalk. The officer saw an adult, white, medium-sized dog that appeared to be a bull terrier mix or similar breed on the sidewalk area. According to the affidavit, there was blood on the ground near the dog which trailed nearly a mile down the road.

The affidavit states that the dog was profusely bleeding and had a broken hind leg and a large cut with a bone sticking out of it. All four of the dog's paws were also cut and bleeding and the dog appeared to have cuts on other parts of its body and was bleeding from its mouth.

The officer, who had previous training and experience as an Animal Control officer in addition to their police training, suspected that the dog also had internal injuries. The officer held pressure on the dog's wounds and, along with another officer, applied bandages and administered "Quick Clot" to the wounds in an attempt to slow the bleeding.

An Animal Control officer came and took the dog to a nearby vet, where it underwent surgery. KVUE learned Thursday that the dog, Champ, was still sore but was up eating.

The officer who filed the affidavit spoke to the two people who were standing nearby where the dog was found, one of whom was the person who called police. They told the officer that they had seen a pickup truck – driven by a man whom they recognized as their neighbor, Rubio – driving westbound down Bluffstone Drive. They said they saw the dog tethered to the truck, near the wheel. They saw the dog being drug along the ground before it was caught into the wheel and ran over by the truck. The dog was then ejected out of the wheel. They said Rubio looked at them, looked into his rearview mirror and then continued driving without stopping.

A third witness told the officer they did not see the incident, but heard it and described it as "what sounded like a dog fight lasting five seconds."

The officer walked to a nearby road, Moonmist Cove, and found a blue, Dodge Ram pickup truck with an engine that appeared to still be "hot." The truck had a red substance on the back right tire, wheel well and fender area, which the officer believed to be blood. There was also a dog leash in the bed of the truck that was missing a buckle, as well as a rope "chain" tied to the bed of the truck, scratch marks on the right side of the truck and a gouge in the paint on the right side of the bed, consistent with a chain rubbing against it, according to the affidavit.

Duck shot with arrow at Arboretum, another reportedly beaten to death

VIDEO: Woman abandons chihuahuas in parking lot, nearly hits them with her vehicle

The officer went inside the home where the truck was parked outside and found Rubio, who told them he was the owner of the truck and that he owned a white, bull terrier-mix type dog. The officer asked if the dog was home and Rubio said it was not and that he had been driving home from Houston with the dog in the bed of his truck but the dog wasn't there when he got home. Rubio began crying and when the officer asked why, he said he was upset that he didn't know what happened to his dog. The officer asked if Rubio looked for his dog and he said he did for about 30 minutes. Rubio also said he had taken the dog to meet with someone else to give it to them because he could no longer take care of it, but he later returned home with the dog.

In the affidavit, the officer stated that he believes Rubio was lying, based on the fact that the leash and collar were in the truck bed, not hanging out of the truck, and that Rubio would have seen the multiple witnesses crowded in the area with the dog.

Tara Wright, who lives nearby where this happened, told KVUE she could not believe something like this happened in her neighborhood.

"It's quiet. It's a good neighborhood. Kids are always out in the street playing. Never had any problems," said Wright.

She says she was at home Saturday night when she heard her dog growling out the window. She got her shoes on and went outside to find a bloody scene.

"It was pretty gruesome ... there was blood everywhere," said Wright. "All four of his paws were just grinded down to the knuckles really."

As the dog continues to recover, Wright says she just hopes the dog lands in the right home.

"I just hope that they get him in a home where he doesn't have to worry about that," said Wright.

If convicted, Rubio could face as many as 10 years in prison.

Her 9-month-old refused to take her bottle. That's when she found out her 'formula' was fake.

It's so hot it feels like Austin is melting. Let's experiment!