Gerald Wayne Williams claims he was at a party during the time 17-year-old David Castro was shot and killed, according to activist Quanell X. 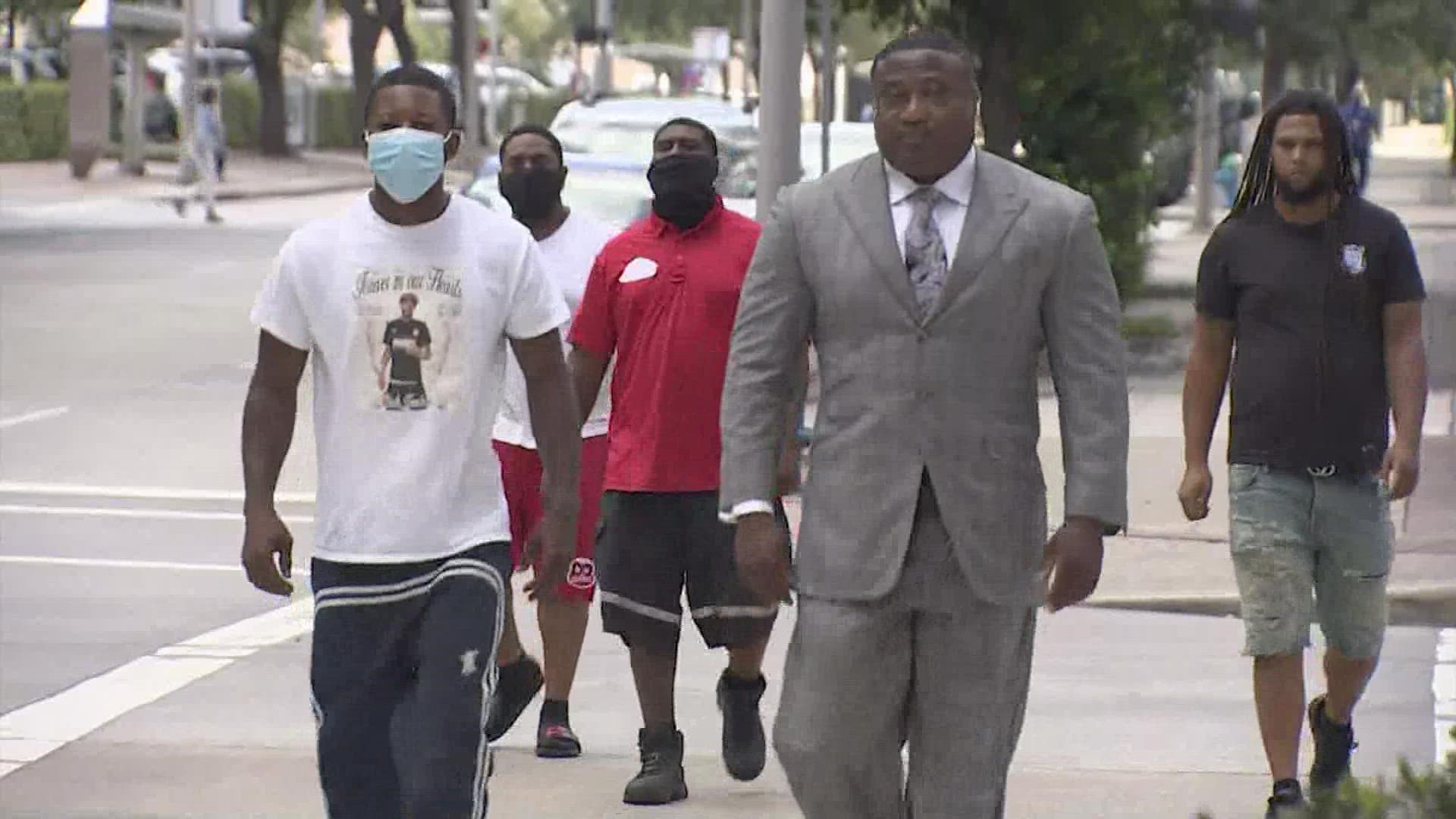 HOUSTON — Gerald Wayne Williams, the man charged in the deadly road rage shooting after an Astros game, claims he is innocent after turning himself in to the Houston Police Department.

"He vehemently, from day one of speaking with me, has said he's innocent. And that he did not shoot and kill anyone," said activist Quanell X, who escorted Williams to the Travis Street police station.

The 34-year-old suspect is charged with murder in the July 6 shooting of 17-year-old David Castro. However, Williams claims he was at a party when the alleged crime took place, according to Quanell X.

A judge initially set his bond at $350,000 on Monday night. However, the Harris County District Attorney's Office then filed a motion to deny Williams bond. The motion was granted, so Williams will remain in custody until a bond hearing on Friday.

"Once law enforcement contacted him, he fully cooperated with them. He did not run. He did not evade them. He met with them," Quanell X said.

Watch Williams' first court appearance in the video below:

Quanell X said the suspect had multiple conversations with police prior to his arrest, including an in-person interview. He said police haven't revealed how Williams went from being linked to the vehicle involved in the shooting to now being charged with homicide.

Finner said Williams will be processed and police will take additional statements from the suspect.

"He's in custody," Finner said. "I want to thank our investigative division for the work that they've done and also our citizens. We've said all along when we're dealing with homicide, it's very important that we all work together as a community."

"[Williams] looks forward to his day in court. He wants to maintain his innocence and fight for his name in the court of law. Now due process will take place," Quanell X said.

The teen's father Paul Castro said the family had been praying the suspect would be taken into custody peacefully without the harm of more individuals or officers.

"I think today just proves that love is greater than anger and hate," Paul Castro said. "Good people are greater than bad people."

He thanked investigators and the public for their support during this difficult time. He asked for continued prayers for the family, especially for David's mother, siblings and grandparents.

"There are no words in the English language — nor should there be — to describe the pain that we're going through right now," the father said.

"I thank Police Chief Finner, HPD investigators, and the community for the collaboration that led to the surrender and arrest of the suspect. The constant flow of eyewitness tips, information about the vehicle, and the suspect’s description kept this crime front and center for several weeks.

"The arrest will not bring back 17-year-old David Castro, but I hope and pray that it brings comfort to his grieving family as they take a step toward justice and healing. This case is a tragic reminder that guns, road rage, and reckless behavior have deadly consequences.

"The shooting was senseless and indefensible, and we must work together to ensure that an incident like this never happens again in our City."

According to court documents, while leaving the Astros game, Paul Castro, David's father, had a verbal altercation with a man driving a white Buick. They said the Buick began following them through the downtown area.

Paul Castro sped away to try to avoid the suspect, according to court documents. As Castro made a U-turn at the East Freeway at Wayside, witnesses told police several gunshots were fired through the back window of Paul Castro's truck. David Castro was struck and later died from the injuries, authorities said.

Court documents said officers got surveillance video at a nearby Valero and found two shell casings at the turnaround in front of the gas station.

Police said a car matching the description was put on sale through Offer Up so they tracked down the person who posted the ad. According to court documents, Williams bought a Buick Lacrosse on May 30, and that the vehicle couldn't be found after the deadly shooting.

Police said the burned car was found in a field near Williams’ house and cell phone records placed Williams in the area of the shooting at the time it occurred.