A joint press conference was held Monday to provide more details on the timeline and the actions of a shooter. 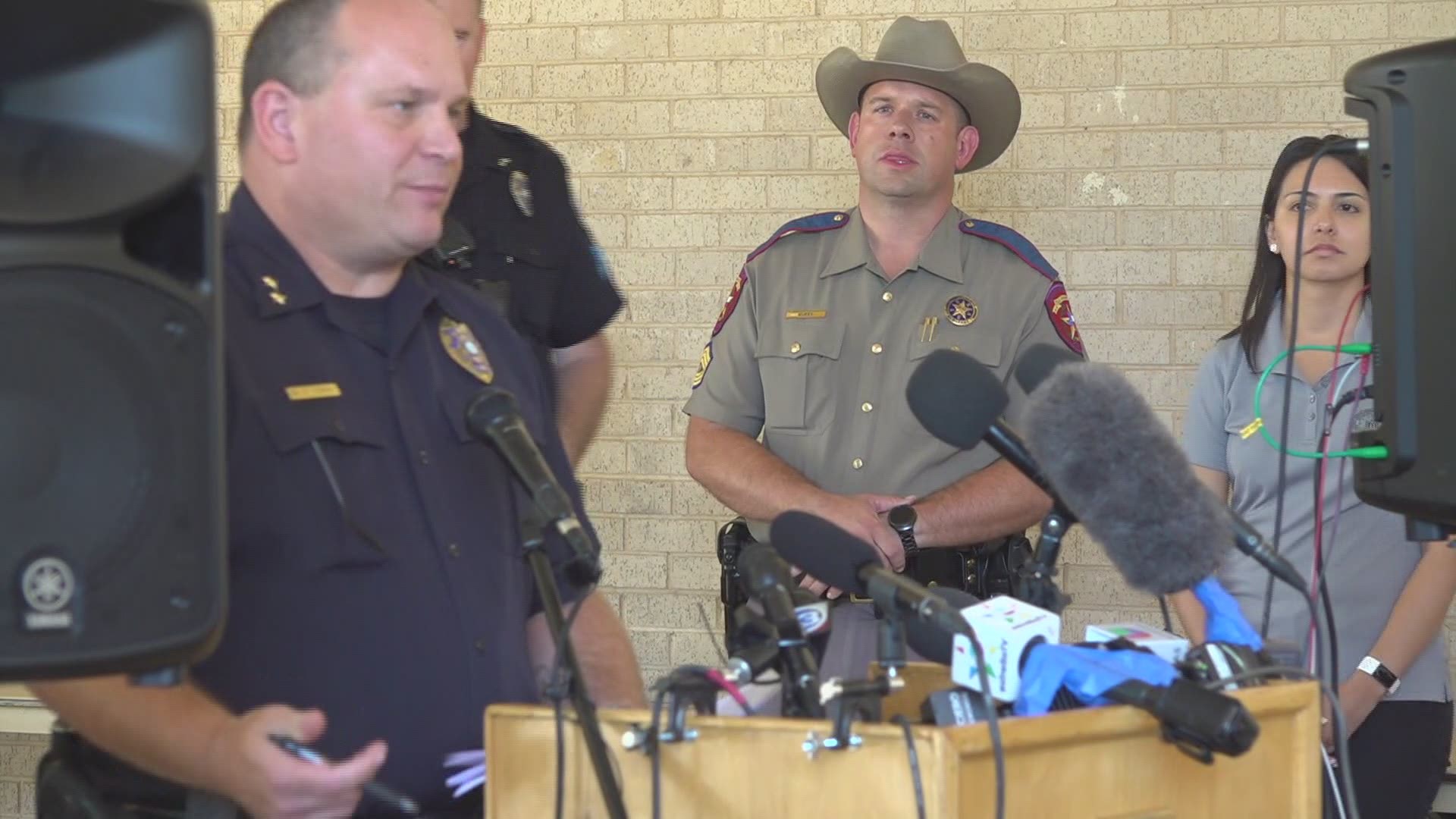 ODESSA, Texas — The shooter in the Saturday spree in Odessa that left 22 people injured and seven victims dead, called the FBI Tipline 15 minutes before he fired his first shot. Officials say the shooter's message to the tipline was rambling about injustices in this world, but he made no threats.

Reports that the shooter had been fired from his job shortly before Saturday's events unfolded were confirmed by Odessa Police Chief Michael Gerke. His employer did call 9-1-1 after he was fired, but the shooter was gone before law enforcement arrived on scene.

A Texas Department of Public Safety trooper unit pulled the shooter, who was driving a gold sedan, over for a traffic violation.

"Remember, there is no such thing as a routine traffic stop," Gerke said.

After firing shots at the troopers, striking one, the shooter continued west on Interstate 20. He went into the city of Odessa and began firing more shots on 42nd Street, where he shot multiple civilians.

The shooter then traveled to the 3800 block of Adams Street, where he abandoned his vehicle, killed a postal worker and hijacked her postal van. He then continued shooting as he travels away from the location to the Cinergy theater.

At the theater, he made contact with multiple law enforcement officers where gunfire was exchanged and according to Gerke, "the threat was eliminated."Gerke said the investigation into Saturday's shootings has been a tremendous collaborative effort between local, state and federal law enforcement agencies.

The tweet read, "Not only did the Odessa gunman have a criminal history... ...he also previously failed a gun purchase background check in Texas... ...& he didn’t go thru a background check for the gun he used in Odessa.  We must keep guns out of criminals’ hands."

ATF Agent John Wester said his agency, the FBI and DPS were aggressively following leads as to where he obtained the firearms used in the mass shooting.

DPS, the Texas Rangers and the FBI are looking into a motive for the shootings, but so far, there has been no explanations for Saturday's events.

When asked why the shooter's employer called for law enforcement, Gerke said he could not specify the reasoning behind the call, but said sometimes law enforcement is called in as peacekeepers.

"Blessed are the peacemakers, right?"

Gerke addressed questions about there being a breakdown in communications between dispatched calls between Midland and Odessa and said he has had conversations in the past with the Midland Police Department and he will continue to pursue a solution.

FBI Special Agent in Charge Christopher Combs spoke about the search of the shooter's home and said it has been completed. He said law enforcement is still in the process of combing through the evidence collected from the home in Ector County.

Combs said the conditions in the home reflected the mental state the shooter was in at the time.

"He was on a long spiral down," Combs said.

NewsWest 9 will continue to follow the law enforcement investigations and provide updates when available.