One of the suspects has previously been convicted of murder in Florida. 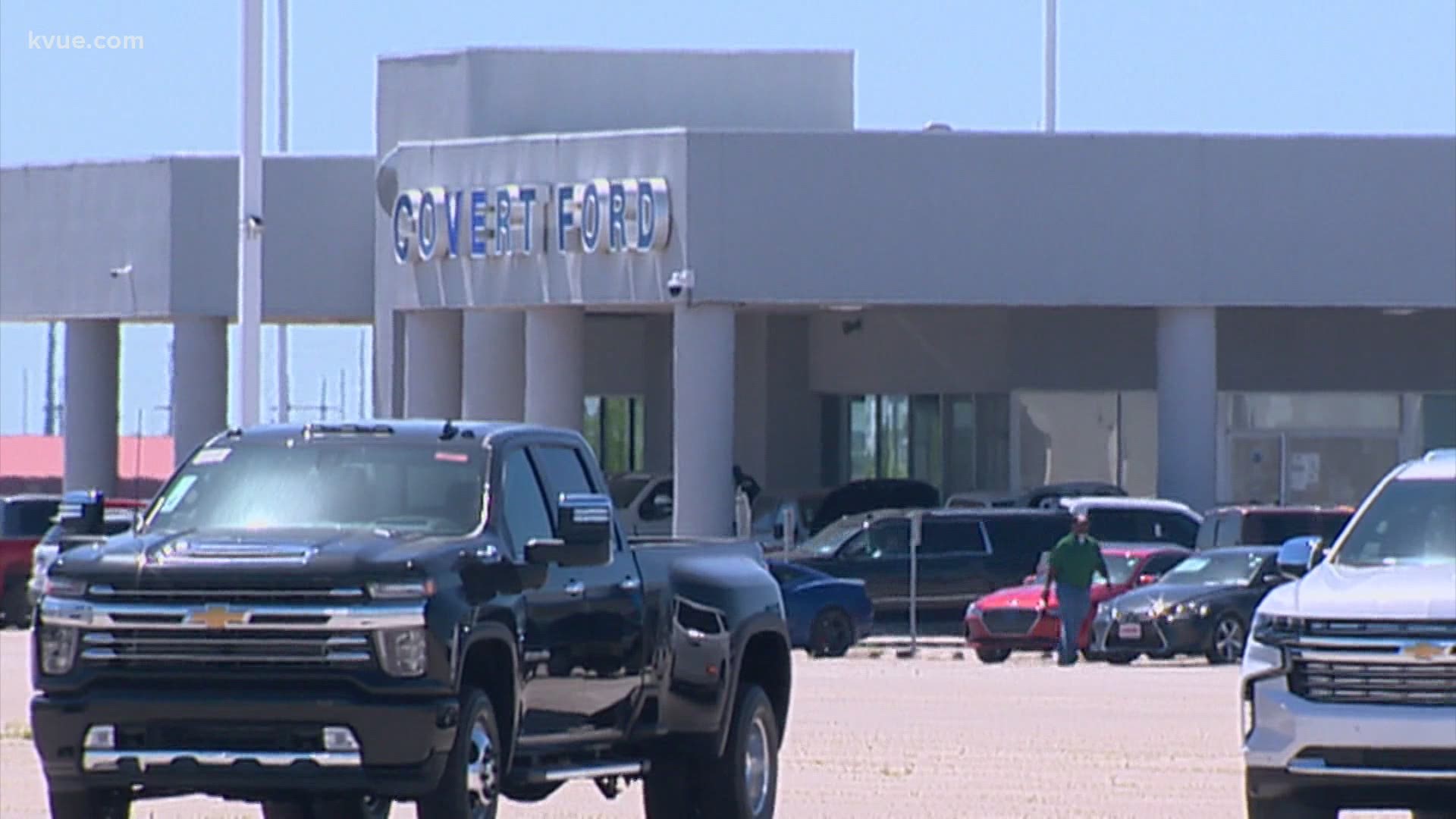 AUSTIN, Texas — Two now-former employees of Covert Hutto have been arrested on firearms charges, according to court documents obtained by KVUE on Wednesday.

The Bureau of Alcohol, Tobacco, Firearms and Explosives (ATF) identified the individuals as Joshua Ellard and Craig Tondre.

The ATF confirmed that Ellard was arrested for felon in possession after he allegedly sold several firearms unlawfully. Tondre was arrested after being accused of dealing without a license.

The documents state that through text messages, an undercover officer arranged to meet Ellard at the dealership on Feb. 24 to purchase a rifle. During this conversation, Ellard said he would need to talk with Tondre, the general sales manager, to bring their "inventory" to work so he could see what they had available.

Once the officer arrived, Ellard exited the dealership and led the officer to a Covert vehicle that, through previous surveillance, was seen parked at Tondre's residence. Ellard stated that the guns were inside the vehicle and that they would need to move to another location in the parking lot because he had previously gotten into trouble for dealing guns at the dealership.

When they moved to the northeast portion of the lot, the documents state that Ellard opened the back hatch to show three short rifles. Containers of ammunition were also found in the back.

The documents stated that Ellard told the officer he builds AR rifles and that he sells pistols, rifles and shotguns and would be able to sell more to him in the future, including a silencer if he wanted one. He also showed the officer a wad of $5,000 in cash stating that he got the money from selling guns and cars.

The officer purchased the Aero Precision pistol. Agents then determined that the weapon contained a "drop-in auto-sear switch" inside that allows it to fire automatically. This switch is federally prohibited under the National Firearms Act and allows the pistol to be classified as a machine gun.

The officer later scheduled a second transaction on Feb. 25 to purchase the silencer, again at the dealership. Ellard agreed to sell the silencer and 100 rounds of .223 ammunition for $1,100, the documents state.

A detective then scheduled a third transaction with Ellard to purchase a 5.56 AR-style rifle for $2,500. Ellard stated that this item would need to be purchased from Tondre.

On March 10, officials observed Tondre exit his residence and place an AR-style weapon into a black Mercedes SUV. When the detective met Ellard later that day, they said he took them to the Mercedes, stated that it was his boss's vehicle, and sold him the weapon. The rifle was identified as a Spikes Tactical rifle.

Another controlled purchase was arranged on March 31 at Tondre's residence. Officials said Ellard opened a safe in the garage, where the detective observed about 10 firearms, including barreled firearms, rifles, shotguns and a revolver. After negotiations, he agreed to purchase two AR-style rifle/pistols for $3,100. These weapons were identified as Palmetto State armories, model PA 15.

During this transaction, officials said Ellard made several comments affirming the residence was his boss's and that the guns were his boss's guns.

According to his criminal history, officials said Ellard has been convicted of murder in Escambia County Florida. Online records show he was sentenced in 1995 and served 22 years.

“Two employees who worked for Covert Ford Hutto had their employment terminated immediately after management was informed of their arrests on allegations of selling illegal firearms. Covert Ford Hutto was not aware of any alleged illegal activity by these employees on our premises until the time of arrest. Once we learned of the arrests, they were terminated. The actions of these former employees do not reflect the values and business practices of Covert Ford Hutto. No member of management or ownership knew of any illegal activity prior to the arrests of the individuals.”

'The best 23 minutes I've had as a firefighter': Healthy newborn surrendered to Safe Haven baby box

Out of control rocket expected to plunge back to Earth soon