As business owners hand out freebies for voting, the community is helping them rebuild. 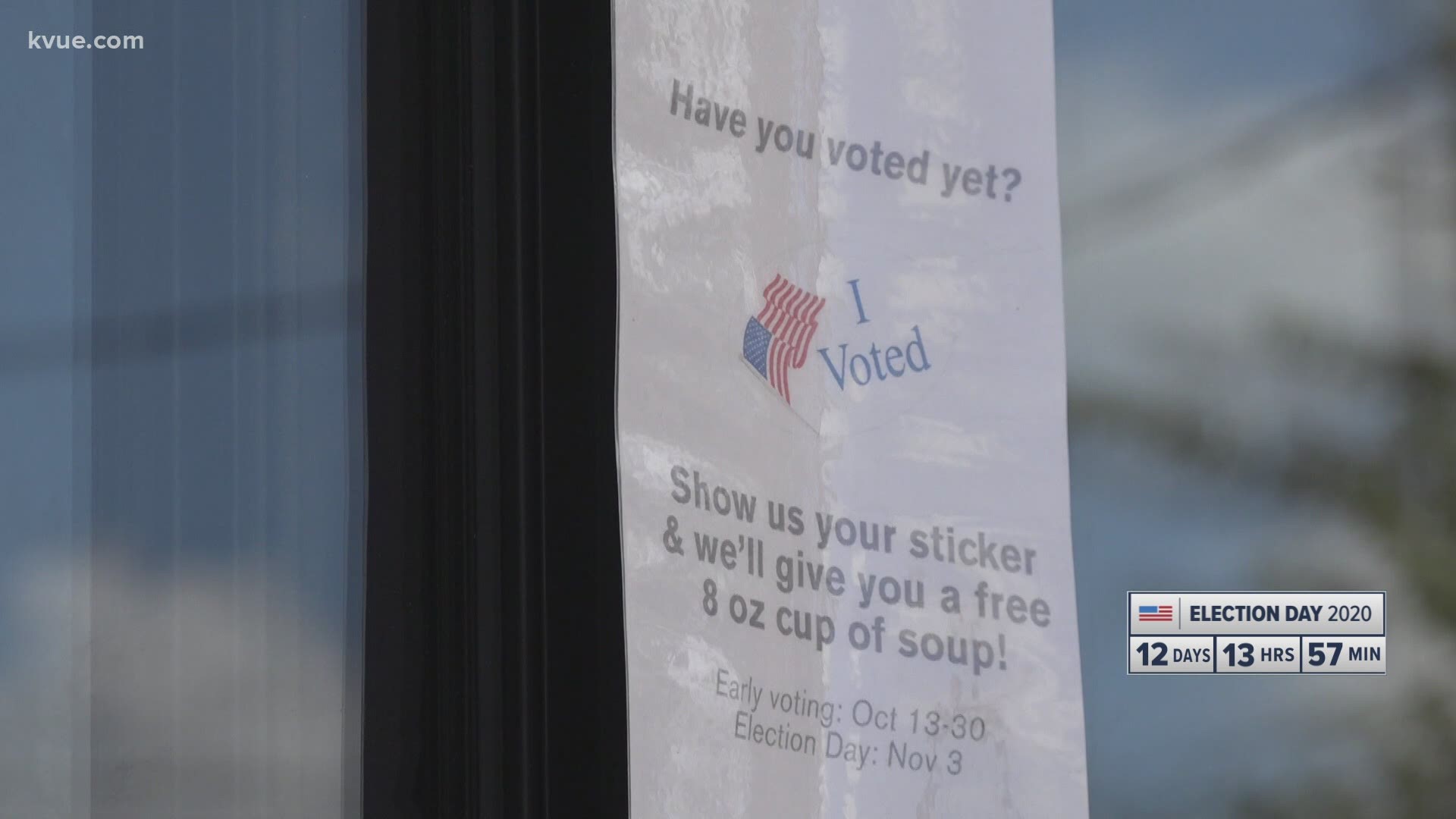 AUSTIN, Texas — Some local business owners are offering incentives to vote and, in return, customers are giving those businesses a much-needed boost.

"My friends in Dallas were jealous that they didn't have a list like this," Veronica said. "It makes me excited."

Veronica took advantage of a free 8 oz soup at The Soup Peddler.

"We are giving away a lot of soup," said David Ansel, the founder of The Soup Peddler.

Ansel said since early voting started, the company has seen an uptick in customers at their location at 1401 Rosewood Ave., across from the Carver Branch Library, a polling station.

Ansel said Friday that the food and juice bar had a record number of tickets.

RELATED: You can get free food and booze with an 'I voted' sticker. Here's where in Austin

"If we weren't giving away half the soup, then we probably would have had a record sales day as well," Ansel said. "So, it's encouraging."

A couple of months ago, Ansel was forced to close one of his locations due to the pandemic, so seeing the support reciprocated makes him happy.

"It's kind of a celebration here in Austin, just to be part of, a feeling like an upswelling feeling of hope," Ansel said.

The Soup Peddler has been around since 2002, but this is the first time the company has provided an incentive to vote.

They are not alone. KVUE has a whole list of local businesses that are also giving away freebies.

"Bring your 'I voted' sticker and get 50% off your first pint or flight of beer," said Kent Killough, the co-owner of Vista Brewing.

Killough said this year he had to go beyond his civic duty and find a way to get people out to vote and the best way was through his business.

RELATED: Central Texas voters explain why they chose this election to vote for the first time

"I hope in some small way, through this promotion, we're inspiring folks to go vote, then come over and have a moment to think and talk and express those views in [a] very social and productive way," Killough said.

Killough said he has also seen over a dozen voters a day exchange their "I voted" sticker for some booze.

Both businesses will continue to offer these incentives until Election Day.

"Please vote, I am begging you," Ansel said.

Texas Longhorns band will not attend Baylor game, play 'The Eyes of Texas' due to lack of 'necessary instrumentation'

One dead in crash near Lake Travis, EMS officials say