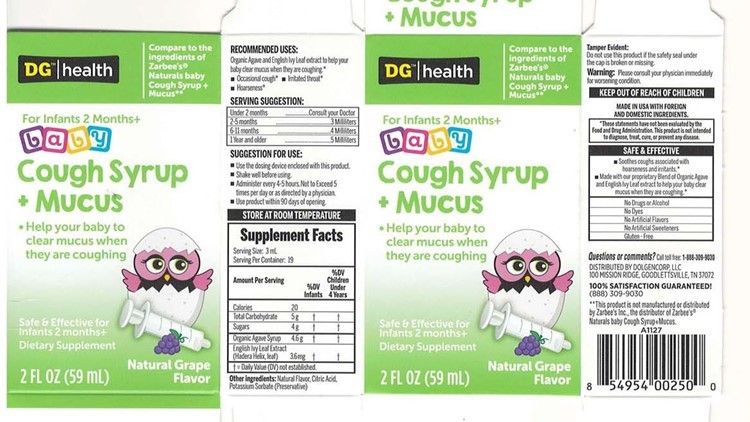 One lot of DG™/health NATURALS baby Cough Syrup + Mucus were recalled because of a possible bacteria contamination, March 20, 2019. TEGNA

A brand of baby’s cough syrup sold nationwide at Dollar General stores is being recalled because it may be contaminated with bacteria that could lead to vomiting or diarrhea and, in rare cases, could be fatal.

Kingston Pharma is recalling one lot of 2-fluid ounce (59 mL) bottles of DG/health Naturals baby Cough Syrup + Mucus because it could be contaminated with Bacillus cereus or Bacillus circulans, according to a company-written recall notice on the FDA website.

"Bacillus cereus in food products has the potential to produce two forms of gastrointestinal illness, one being a syndrome primarily of vomiting, and the other of diarrhea. Most often, illnesses are mild and self-limiting, although more serious and even lethal cases have occurred," the recall announcement said.

Those at risk for more severe forms of the illness include infants, young children and those with weakened immune systems.

The company said there have been no reports of illness related to the recall.

The bottles come inside a carton and are marked with Lot KL180157. The expiration date 11/20 is on the bottom of the carton and back of the bottle label. Customers can return it to the store for a refund.